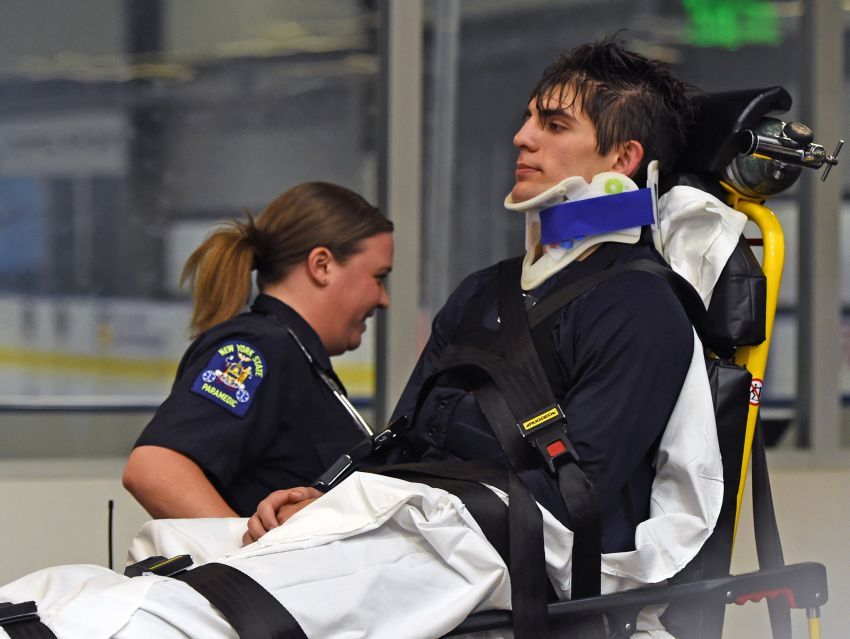 BUFFALO – Sabres prospect Michael Campoli was stretchered off the ice this morning with his neck stabilized after getting hit into boards late in a three-on-three development camp scrimmage.

Campoli, 18, was knocked by William Carrier and tried to skate off the HarborCenter ice before falling down. Campoli, a defenseman, stayed motionless on the ice for about 20 minutes surrounded by team medical personnel and the Buffalo Fire Department.

New Update: The Sabres and Campoli have tweeted he left the hospital this afternoon “feeling good.”

“He was obviously speaking and joking a little bit and he was moving his extremities a little bit,” Murray said.

He added: “I thought it was a good hit, an unfortunate ending we’re all concerned about it. Up to that point … I thought it could have been a touch more competitive. Maybe we have a lot of young guys who thought it was like shinny or a scrimmage.”

Campoli was eventually placed on a board and wheeled off the ice in an upright position as the 1,000 or so fans, who had stayed silent, erupted in applause. He was transported by ambulance to a local hospital.

The scrimmage, the last part of camp, has resumed. Campoli is an invite from the U.S. National Under-18 Team.

Stayed tuned for updates for Campoli.

Thanks for all the get well wishes! I'm out of the hospital and feeling good! Big thanks to the @BuffaloSabres organization #Sabres