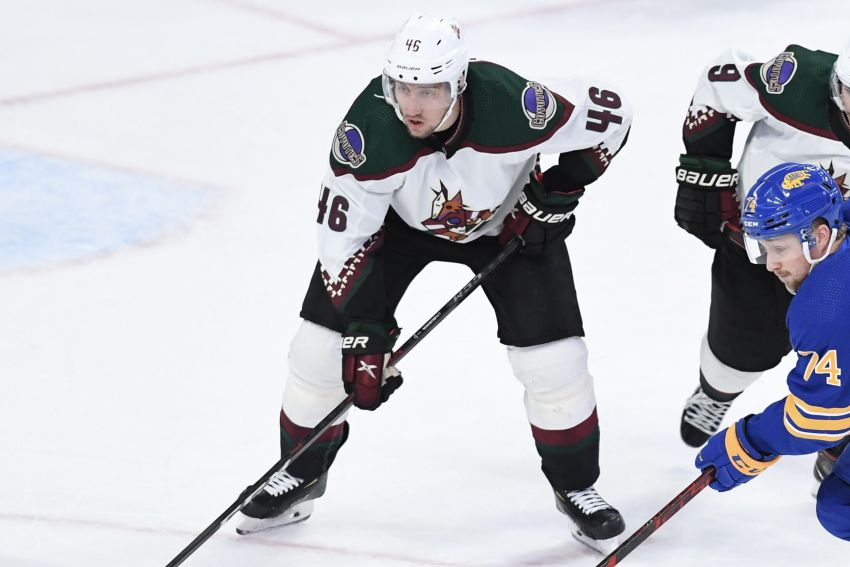 At 28, having played nine pro seasons, newcomer Ilya Lyubushkin is the elder statesmen of the Buffalo Sabres’ defense corps.

Buffalo’s second-oldest defenseman, Casey Fitzgerald, is just 25. The average age of the seven defenders expected to be on the opening night roster is 23.

The six defensemen the Sabres utilized down the stretch late last season – Fitzgerald, Jacob Bryson, Rasmus Dahlin, Henri Jokiharju, Owen Power and Mattias Samuelsson – will all be returning in 2022-23.

The blue line was about set before free agency opened. The Sabres just needed to add one more piece, preferably an experienced right-handed shot with a different skill set than their youngsters.

Enter the 6-foot-2, 208-pound Lyubushkin, who signed a two-year, $5.5 million contract last Wednesday. The Sabres filled a glaring need by bringing in the Russian.

“He’s, obviously, different in the standpoint he’s more hard-nosed,” Sabres coach Don Granato said Saturday. “We can use him in penalty-kill situations. He’s probably more physical than the rest of the group, and I think he’ll push guys in that group to be more physical. And I think our young guys will actually learn to pick up some of his traits.

“Anytime you put more talent in your lineup and more experience, they’ll learn from each other. Owen can learn from Dahlin, and Dahlin can pick up some pieces from Owen.”

Lyubushkin faced the Sabres four times last season, losing every meeting. In October, he played them as a member of the Arizona Coyotes. Then late in the season, after joining the Toronto Maple Leafs, he saw them three more times.

By then, the Sabres had began to find an identity.

“When I played in Arizona against Buffalo, the games were always tough,” Lyubushkin said on a Zoom call Monday. “I don’t know why, but it’s always tough for me. After each game, I feel like, ‘Oh, my God, it’s so hard game.’ I don’t know if it made my decision (to sign).”

He added: “When we play against Sabres, it’s so hard, (the) forecheck for me. I don’t have the time to pick up (the) puck or seconds to see what’s going on on the ice. You need to move (the) puck quicker, quicker, quicker because they play physical.”

He spent the first five years of his career at home, playing for the Kontinental Hockey League’s Yaroslavl Lokomotiv.

By 2018, he decided he wanted to come to North America.

“When I grew up, it was my dream to play in the NHL, of course,” Lyubushkin said. “(The) KHL is good league but NHL is first league, for sure. And after five good seasons in KHL, I feel like I can go right now because if (I don’t) go, it’s too late.”