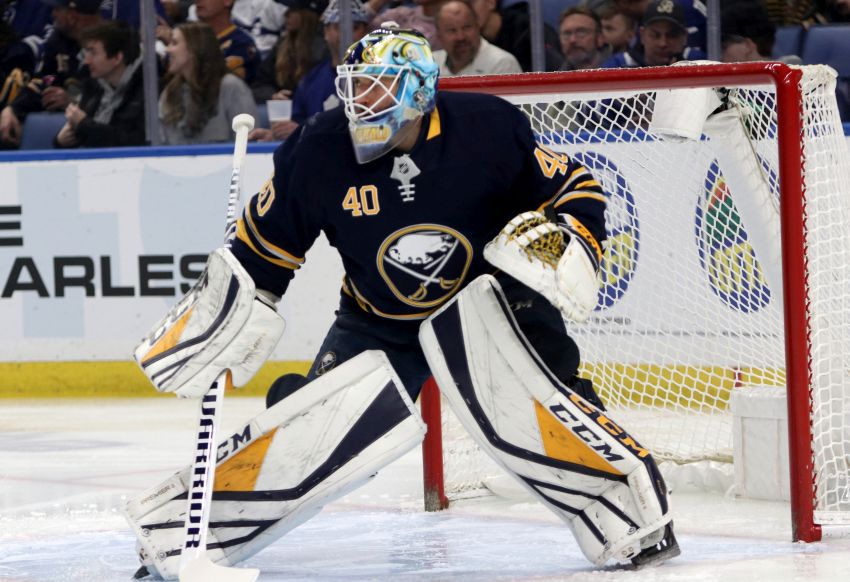 Coach Ralph Krueger said everything would be up for competition during training camp, and based on their preseason numbers, Ullmark deserved to start the Sabres’ 50th anniversary season opener.

But the decision, of course, wasn’t quite that simple.

Hutton, 33, played a career-high 50 games and started regularly for the first time last season. He owns terrific career numbers against the Penguins. The Sabres have also historically struggled in Pittsburgh.

Hutton rewarded Krueger’s faith by looking in sharp all night.

“It was a decision out of the coaching room where certainly the experience and the leadership that we felt we needed (Thursday) was better served with Hutton,” Krueger said Friday inside KeyBank Center. “We thought Linus had a great camp. He’s shown a lot of good minutes and we feel confident with both.”

So which netminder will Krueger start in tonight’s home opener against the New Jersey Devils? He said following Friday’s practice that hadn’t been decided yet.

Whatever happens, Ullmark, 26, will almost certainly play soon. The Sabres have three games next week and a condensed schedule because of their trip to Sweden.

Not surprisingly Krueger, who hired Mike Bales as the new assistant/goalie coach, hasn’t said much about his plan. Ullmark said the Sabres have one, although he wouldn’t elaborate.

Clearly, both goalies must perform consistently this season.

Following hot starts in 2018-19 – they ranked among the NHL’s top duos for three months – Hutton and Ullmark struggled in the second half as the Sabres imploded.

The Sabres have other goalies they could turn to. Injured prospect Ukko-Pekka Luukkonen (hip) might start playing games with the Rochester Americans next month. The Sabres also have NHL veteran Andrew Hammond in the AHL.

Ullmark, who started last year 9-1-3, will be an unrestricted free agent following the season.

Hutton roared out of the gate last season, his first with the Sabres after signing a three-year contract. When the Sabres won their 10th straight game Nov. 27, he improved to 12-6-1 with a 2.50 goals-against average and a .920 save percentage.

As the Sabres’ struggles mounted, Hutton, who posted a league-best .931 save percentage with the St. Louis Blues’ in 2017-18, responded by trying to steal every game.

By March, Hutton started adapting to the porous defense in front of him.

“I just tried to keep chipping away,” said Hutton, who faced 31 shots a game. “I think at one point, you’re just trying to do too much. We were giving up so much. Just get back playing the way you can.

“But honestly, I think sometimes you’re just a product of your team. Even when we were winning, we were playing with fire the whole time.”

Hutton said he didn’t tinker with anything in his game during the offseason.

“I didn’t think I needed to,” he said. “I’m two years removed from leading the league with a good save percentage. …

Krueger all but said the Sabres would be foregoing morning skates this season.

Some teams often skip them all together (the Columbus Blue Jackets), while others make them optional.

“Don’t expect us to pregame skate, put it that way,” Krueger said. “We’re outstanding in our activation off-ice. We loved the way guys have come in strong to every practice since the beginning of training camp, so we activate immediately on the ice. What they’re doing off the ice is getting their bodies ready.

“Our soft-tissue injuries have been extremely low because of the work the guys are able to do and how they understand how to get themselves ready. I don’t find that hitting the ice on game days is the norm anymore. For us, it definitely will not be.”

The Sabres will be sporting their special gold and white 50th anniversary jerseys tonight. Players have been breaking in white gloves this week.

No. 1 overall pick Jack Hughes should make his first appearance in Buffalo tonight.