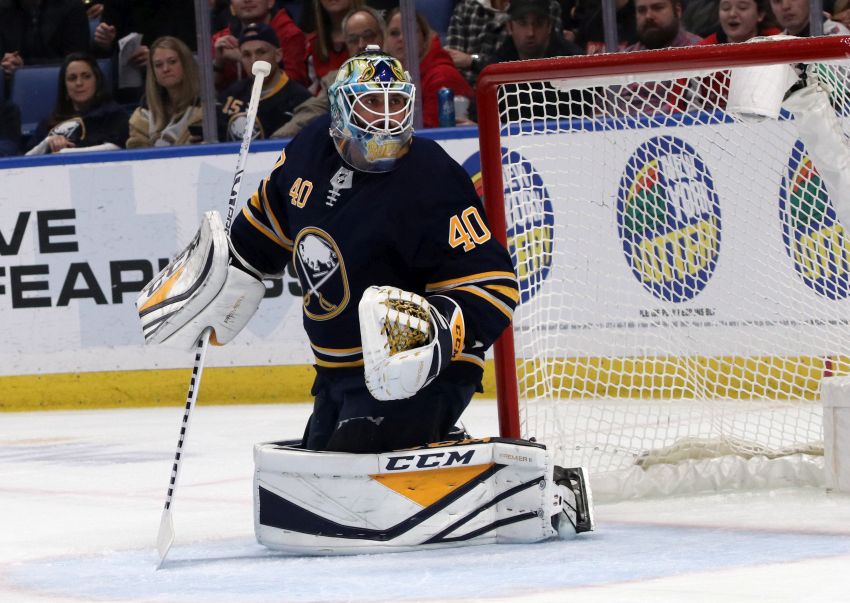 BUFFALO – Earlier this season, goalie Carter Hutton reacted to the Sabres’ struggles by trying to steal every game.

“I don’t think you can really play that way,” Hutton said Tuesday inside KeyBank Center. “I think I need to just control what I can. I think when I’m playing (like) that, just controlling what I can, I think that’s when I’m at my best.”

Hutton has adapted this season. Having spent most of his six-year career backstopping established teams, he was used to operating within a more structured game.

The Sabres, of course, often play loose defensively. So handling the bulk of their goaltending duties – he has played a career-high 44 times – has been a new and sometimes difficult experience.

After enduring a rough stretch in which Linus Ullmark began outplaying him and earning more action, Hutton has started showcasing some of his early-season form.

Hutton looked solid throughout Sunday afternoon’s 4-3 shootout win over his old team, the St. Louis Blues, making 30 saves. Given Ullmark’s recent struggles, Hutton might be the Sabres’ No. 1 goalie again over the final three weeks.

“He’s just got the attitude he’s going to go back to where he was at the beginning of the season and doing what he can do best, control what he can control and stopping that first puck and not allowing that second and third opportunity,” Sabres coach Phil Housley said. “I think he’s just gotten comfortable. He went through a spell there where he was trying to do too much.”

“I’ve played well,” Hutton said. “I think, overall, it’s been a pretty good year. I think you go as the team goes. There’s a lot of things you can’t control. I thought at times I was trying to do too much because we were struggling.”

While the numbers don’t back it up, Hutton believes his game has been stronger this season than a year ago, when his 2.09 goals-against average and .931 save percentage both led the NHL.

“There’s a reason why I had like a .930 save percentage last year,” Hutton said. “We didn’t really give up as much, right? It was a much more predictable game.”

That standout season earned him a three-year, $8.25 million contract from the Sabres on July 1.

Hutton roared out of the gate, winning 12 of his first 18 appearances. He won eight contests during the Sabres’ 10-game winning streak in November.

But Hutton doesn’t believe wins, losses, goal-against average or save percentage truly illustrate how well a goalie has played.

“You have to look at deeper analytics, to be honest with you,” Hutton said. “I don’t know if you can judge it by a box score every night. You have to judge it by the quality of chances we give up. I think some nights it’s been up and down. I think generally for the most part I give this team a chance to win when I’m in there. I do my share.”

Still, Hutton said “everyone gets so worried about” stats.

“The traditional save percentage is ancient now,” Hutton said. “A guy can shoot the puck from outside the blue line, it’s a save, and a guy can have a backdoor tap-in and you make a save and it’s the same. I feel like you need to get into deeper analytics to understand goaltending, in my opinion.”