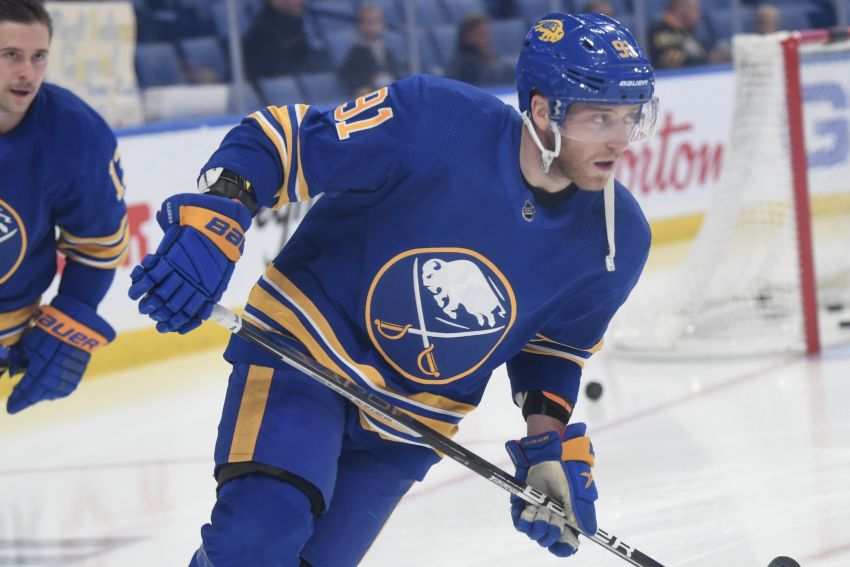 Caggiula, 27, has a six to eight month recovery, according to Adams.

“He’s been seeing some different specialists and gathered all the information and then made the decision a few days ago that he was moving forward with the surgery,” Adams said inside KeyBank Center.

Fusion, of course, was the surgery the Sabres wanted ex-captain Jack Eichel to undergo last year for his herniated disc. Eichel wanted to have disc replacement surgery, a procedure he underwent after the Sabres traded him to the Vegas Golden Knights.

“I talked to him yesterday, he was excited at least to be moving forward and feel like he had a plan, but it is a fairly long recovery,” Adams said of Caggiula.

Caggiula hasn’t played since Nov. 22. He started practicing again before Christmas in a non-contact role before stopping in early January.

The Sabres claimed Caggiula off waivers last season and re-signed him to a one-year, $750,000 contract during the offseason.

Caggiula compiled two goals and five points in 18 games this year. He can become an unrestricted free agent following the season.

“We had missed him since day one,” Granato said of Hinostroza. “The way he plays, the way (Zemgus) Girgensons plays, the way (Vinnie) Hinostroza play, are the way we want to play – with pace, with speed. And him and Vinnie were two guys I was very excited to add to our organization, because they are drivers in the way we want to play. They are tenacious.”

In other injury news, Adams said center Casey Mittelstadt is “close” to returning from his upper-body injury. He won’t play tonight against the Ottawa Senators.

The Sabres have been pushing Mittelstadt hard in practices and doing extra work with him after the sessions.

“He wanted to play tonight,” Adams said. “We’re trying to calm him down a little bit.”

Some other injury updates from Adams are below.

– Adams said Hinostroza, a winger, retweaked his lower-body injury when he practiced once last week. He expects Hinostroza to start practicing again in a few days.

“When he stopped, he rolled a bit there,” he said of Hinostroza’s brief return. “And it just retweaked it. So the good news is the MRI the next day, right away didn’t show any further damage or any structural issues. It’s just more of a setback.”

“Jack’s at four weeks right now, he’s doing really well,” he said. “But it’s like a little bit of like a Casey situation where we’re trying to like give him a little bit more time and make sure we’re setting them up. What the doctors tell me with that injury for both Vinnie and Jack, it’s not uncommon to have a little bit of setbacks. It’s just part of the process.”

– Adams said Girgensons’ lower-body injury is related to the hamstring injury that shelved the winger all of last season.

“He just had to get it under control,” he said. “But he’s doing well, so probably still a couple weeks away.”

“He’s more on the day to day than week to week,” he said.

“Just a matter of rotation,” Granato said of sitting out Samuelsson. “He’s been playing fine and well.”

The Sabres are trying to win three consecutive games for the first time since they opened the season 3-0-0 from Oct. 14 to 19.

“It’s significant to me that we got back to playing the way we should be playing, and that’s with a lot of passion, a lot of energy, a lot of flow, rhythm to the game,” Granato said. “By virtue of that, you give yourself the best chance to win every night. I’ve talked a lot, I’ve said when you do the right things, the accumulation of doing the right things is you accumulate wins. So let’s keep focused on doing the right things and I say to the guys a lot, hit the repeat button. …

“We were able the last couple of games to dictate more just by playing our way and less worrying about how to adjust to the opponent. That doesn’t mean you don’t respect the opponent; we have respect for every opponent because you have to but we need to play our way and that’s been really nice.”

Adams said he’s happy to see Eichel, who made his debut for the Vegas Golden Knights in Wednesday’s 2-0 loss to Colorado, back playing.

The Sabres traded Eichel to Vegas on Nov. 4 to in exchange for wingers Peyton Krebs and Alex Tuch and two draft picks.

“We’ve moved on here,” Adams said. “We are so focused on what we’re doing here. … I think more about how excited I am about Alex and Peyton and first-round pick and the second-round pick than what’s going on there. But I am happy for him on that personal level.”