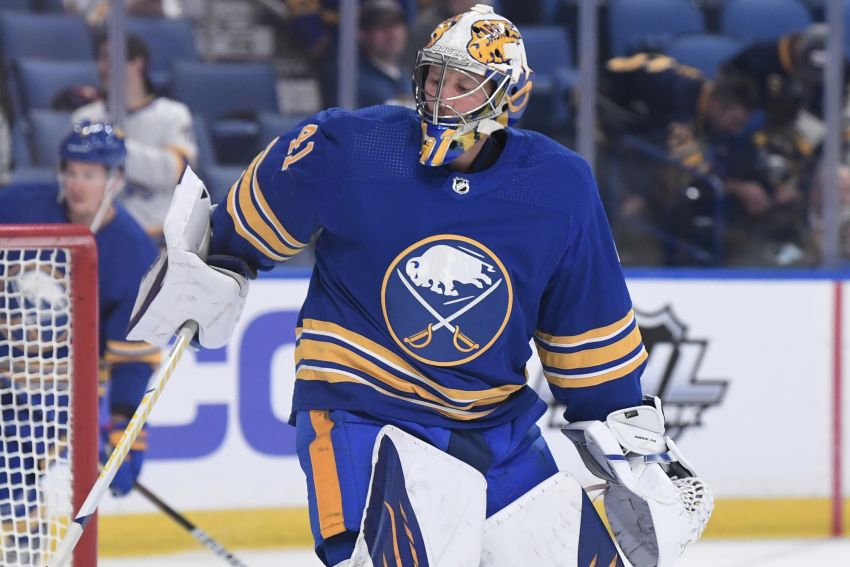 BUFFALO – For seven seasons, Sabres goalie Craig Anderson bounced around the NHL and minors, patiently waiting for an opportunity that might never materialize.

Anderson, 40, was property of five NHL teams during that uncertain stretch, six if you count two stints with the Chicago Blackhawks. The American once spent four days with the St. Louis Blues when Sabres coach Don Granato was a first-year assistant in 2005-06.

Then in 2009-10, Anderson seized his first chance be a No. 1 goalie, playing 71 games for the Colorado Avalanche. But when he faltered the next season, Colorado traded him to Ottawa, where he morphed into one the Senators’ all-time greats during a terrific 10-year run.

In 2017, Anderson backstopped an overachieving Senators team to overtime of Game 7 of the Eastern Conference final. He ranks first in franchise history in wins (202) and games (435).

Not surprisingly, Granato said Anderson will start tonight’s game against the Senators at KeyBank Center, his first appearance against his former team since he left Ottawa in 2020.

Anderson endured some bumps over his long career in Ottawa, occasionally losing playing time to other goalies. Still, he always grabbed the starting job back.

“I got the opportunity, and what do you make of it?” Anderson said of how his career transformed in Ottawa. “And that’s a mindset. And there was plenty of times in Ottawa where we had great goaltending duos and sometimes trios, where again, it was what do you make of your opportunity? When you’re given the opportunity to make something, you got to make the most of it and prove that you want to have it there every day.

“I think that’s kind of the moral of the story is you get knocked down, but what happens to you after? What do you do? How do you react?”

While Anderson said facing the Senators is “no different than playing any other team,” he acknowledged he was “pushing” to return from his upper-body injury last month when the Sabres played their only two games in Ottawa. COVID-19 restrictions forced the games at Canadian Tire Centre to be played in front of no fans.

“It was one of those things where it didn’t end up working out the way that we wanted it to,” Anderson said of the games in Ottawa. “It did cross my mind and it would have been exciting, but at the same time, with everything that’s going on, with no fans, I’m not sure. It would have been just kind of another game. You really wouldn’t have had the camaraderie or the cheers you would normally get when you go back to a building you’ve been in for many years.”

Mittelstadt (upper body) had been rotating in on other lines. The Sabres want to push him to see how he responds.

“We wanted to give him a hard push today just to see how his body responds to it tomorrow and we’ll communicate that with him now and tomorrow,” Granato said following Wednesday’s practice. “So no chance in my mind that he’s in there tomorrow.”

With Mittelstadt on a line, center Mark Jankowski practiced as a spare.

Meanwhile, Granato said defenseman Robert Hagg will play against Ottawa after sitting out Tuesday’s 6-3 win over the New York Islanders.

With seven healthy defensemen, Granato has been rotating. Jacob Bryson and Mark Pysyk have also been scratched. Granato did not know which defensemen will sit out tonight.

Seconds before the the cross-check, Nelson hit Cozens between the legs with his stick.

“Dylan is a competitive guy and I love how competitive he is,” Granato said. “He makes his presence known and I like the way he plays, period. I’ll say that.”