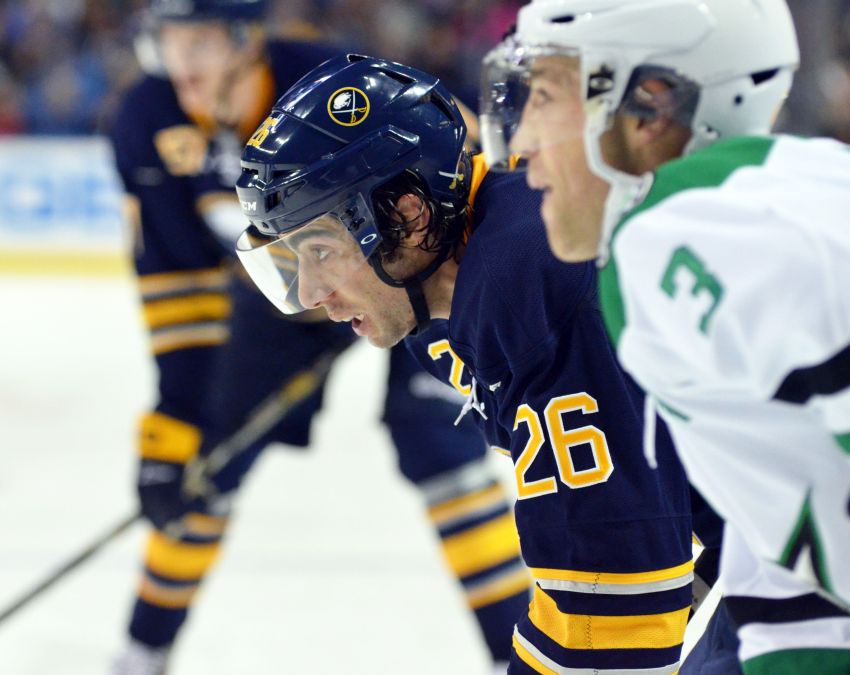 BUFFALO – It’s an odd dynamic. Some fans, even the most diehard ones, want the Sabres to lose this season so they can draft a franchise-changing prospect.

“I didn’t come here to lose,” Sabres winger Brian Gionta said Thursday inside the First Niagara Center. “The first step is to get into the playoffs.”

That kind of talk has been rare here for the last 18 months as the Sabres quickly morphed into the NHL’s worst team. But as training camp opened Thursday, Gionta, a marquee July 1 signing, set the bar high.

“I think our goal is to make the playoffs,” said Gionta, who won the 2003 Stanley Cup with New Jersey. “If you’re not looking at doing that coming into camp, you don’t have the right mindset.”

While no one else mentioned the playoffs, everyone spoke optimistically as the new season started.

They all talked about the great things the rebuilding Sabres, the league’s laughingstock last year, can do this season after revamping the lineup this summer.

“I think this team is destined for great things,” said Sabres winger Matt Moulson, who re-signed following a stint in Minnesota.

Winger Drew Stafford has a message for anyone hoping the Sabres lose games.

The Sabres have their first on-ice sessions today.

Nolan said he wants to name a captain soon.

Nolan, who doesn’t like playing 18-year-olds out of junior, on keeping slick center Sam Reinhart, the No. 2 pick in June:

“We’re going to do it the old-fashioned way, we’re going to earn it, and Sam’s no different. But here’s some special players that come around once in a while that don’t have to wait until they’re 22.”

Nolan on the upcoming goalie battle between Jhonas Enroth and Michal Neuvirth:

Nolan doesn’t attend many football games, but with Sabres owner Terry Pegula about to take over the Buffalo Bills, the coach said he “might be able to go to a couple.”

“You learn different things from different points, so I’m looking forward to maybe getting to know the Bills coaching staff and maybe take some ideas from them and they can take some from us,” Nolan said. “We’re both in the same position. We both want to make the people of Western New York very proud of their franchises.”

“Hopefully, one of these days I’ll have a kid, too,” Kaleta said. “To be able to take him to a Bills game in Buffalo is going to be special.”