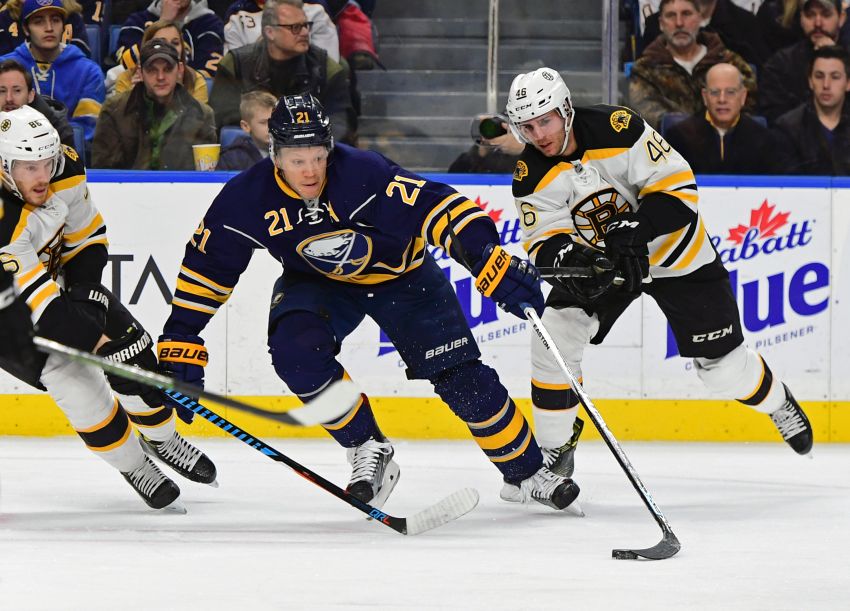 BUFFALO – As expected, Jack Eichel’s return following a 21-game absence to begin the season has boosted the Sabres’ anemic offense.

In 15 games with their slick young center, the last-place Sabres have scored 39 goals, or 2.6 an outing, a decent number. By comparison, they scored only 38 goals, just 1.8 a contest, without him.

So Eichel’s presence has meant almost an extra goal a game entering tonight’s tilt against the New York Rangers, the start of a two-game road trip.

But additional goals haven’t buoyed the Sabres, who have also allowed more since Eichel returned from a high left ankle sprain Nov. 29.

The 28th-ranked offense has also sputtered recently, scoring only 13 times during a dismal 1-4-2 run.

Being bad and boring is a terrible combination. Offensively, the Sabres often showcase little speed and look disjointed. If they score – opponents have blanked or held them to one goal 18 times this season – the joke has become they have their goal for the night.

Right now, with 77 goals through 36 games, 2.1 a contest, the Sabres are on pace for 175 goals this season, which would be the third-lowest full-season total in franchise history.

Despite having the NHL’s eighth-ranked power play, they’ve scored a league-low 52 five-on-five goals.

“Five-on-five, we’re still trying to find our rhythm in terms of being consistent for 60 minutes at a time, creating those quality chances,” Sabres defenseman Cody Franson said Monday inside KeyBank Center. “I think we’ll have a period where we create those quality chances, and then we’ll get into penalty trouble or we’ll turn the puck over a little bit and lose the momentum.”

In addition to Eichel’s dynamic scoring prowess, his return allowed some teammates to move back to their natural positions and not be forced into different roles.

Still, that hasn’t meant much recently. Even before top center Ryan O’Reilly underwent an appendectomy during Christmas break, the offense started sputtering again.

“I don’t think you can expect to have as much offense without him there,” Sabres coach Dan Bylsma said.

Eichel and O’Reilly, the team’s top centers, have only played together 12 times this season. They’ve missed 30 combined games.

“Probably consistency with how we played with the puck offensively,” Bylsma said. “You see (strong offensive play) at times, in spurts of games when we’re coming back or the first period against Boston (on Thursday).”

The Sabres scored two goals in the opening period Thursday, then allowed four straight in a 4-2 loss. They’ve scored one goal in the five periods since then.

“We probably haven’t played well enough to score that third and fourth goal in a game, and that’s kind of what has been hindering us most of the season,” said Sabres winger Kyle Okposo, who has a team-high 10 goals. “Odds are you got to score three goals to win in this league.”

The Sabres have scored three or more goals only 13 times this season.

What else has contributed to the Sabres’ meager offensive production?

Seven players who should dress for tonight’s game have scored zero goals this season. Four others have scored three or less.

The fourth line has contributed almost nothing. While eight-goal winger Matt Moulson recently joined the trio, its other current members, center Derek Grant and Nick Deslauriers, haven’t scored this season.

While consistent offense isn’t expected from the fourth line, the occasional goal would help out.

“When we get one, it’s always a bonus,” Deslauriers said. “You can’t always count on your top lines to contribute. Obviously, we need to pinch in a little bit more. We might have one chance a game, but we have to capitalize on it, and if not, we’ll bring momentum for our first and second line to do it.”

Bylsma said: “It’s always a big boost. You’d like to have consistency or scoring throughout your lineup.

The defense, meanwhile, has contributed a league-low four goals – one from Franson and three from Rasmus Ristolainen.

The Sabres haven’t been lucky

A bounce here or there can go a long way. The Sabres haven’t gotten many this season.

“We went through that skid of games where we just weren’t getting that bounce to have things going in,” Franson said. “We go through some games where we’ve had trouble creating (chances).

He added: “There’s been a lot of situations where (we miss) open nets, (hit) posts, (we’re) blocking our own shots – just things like that. Just speaking from my own experience, I feel like I could have 20 points right now. I’ve got eight. So it’s been frustrating.”