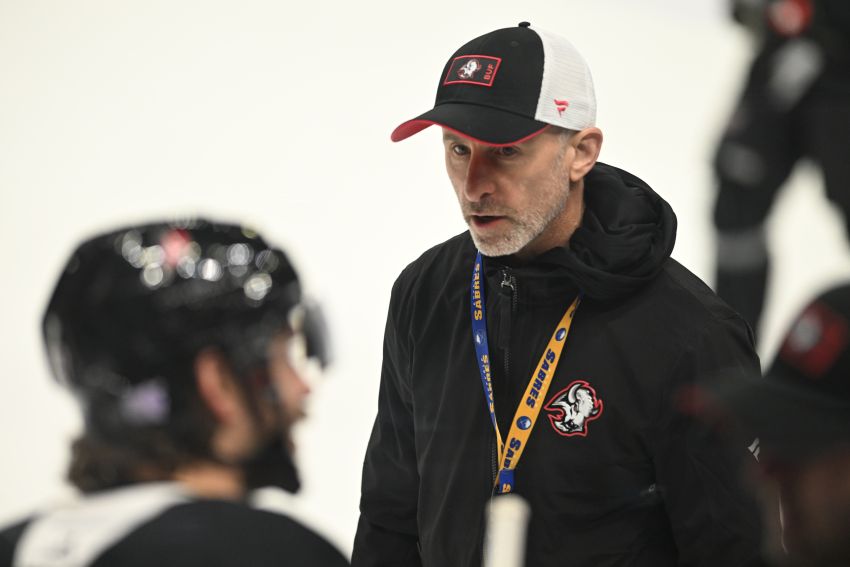 BUFFALO – Kevyn Adams constructed a roster filled with rookies and other neophytes in their early 20s knowing the Sabres would experience ups and downs. Still, the general manager never expected this: an eight-game losing streak following a torrid start.

Three weeks ago, it felt like the Sabres, the NHL’s youngest team, had established themselves as a legitimate playoff contender in the crowded Eastern Conference.

Now, entering tonight’s road contest against the Montreal Canadiens, they rank 29th in the 32-team league.

“I’m calm right now, and I think calm is very important in these types of things, but I’m not comfortable,” Adams said prior to Monday’s practice at KeyBank Center. “You could check my sleep habits, certainly not comfortable at all. I’m wanting to make sure that we have a calmness about this and know that these experiences are exactly what our players will help them grow and learn and get better.”

Their losing streak is the longest since the epic 18-game winless skid they endured in 2020-21.

Like Adams, coach Don Granato believes the struggles the Sabres’ youngsters endure now will be beneficial in the long run.

“We put together a young team to give them this opportunity to go through these experiences and with the thought that they’re going to be become better because of it,” he said. “So I can stand here and say, ‘Yeah, we are going through struggles, it’s hit the psyche,’ but I watch our players and I don’t think they’re less competent or capable.

“They don’t have experience, they’re getting it right now, and it’s causing a lot of self-reflection, it’s causing hesitation as a result, maybe overthinking things, but it’s all dealing with pressure.”

That pressure, of course, is new. Their late-season improvement in 2021-22 and terrific 10-game start this year raised expectations significantly.

Sure, maybe the Sabres would fall off a little and miss the playoffs. They almost seemed ahead of schedule. But three-week losing streaks seemed like a thing of the past.

Their current skid has further illustrated how the Sabres refuse to deviate from their plan. Adams has recently added just one player, center Tyson Jost, a waiver claim from the Minnesota Wild on Saturday.

“Calm is contagious in a way that the players know that we believe in them and support them and we’re not changing course here,” Adams said. “Nobody’s going to come in here and say that this is good enough for now because it’s not. But we do know that this is part of the process of where we’re at as we build this.”

So when defenseman Mattias Samuelsson, who’s expected to play tonight, and Henri Jokiharju both missed time to injuries, the reinforcements only came from the minors.

“All of us who’ve been around the league a long time and know it’s gonna have consequences when you take the talent and the players that we’ve had out of the lineup,” Adams said. “So we’ve looked at every possible way to support our group in the back end, but knowing what the timeline was of those types of injuries, I didn’t want to overreact, do something reactive or emotional, that gets us away from our plan and how we’re building this.”

When the Sabres recently needed to replace injured forwards Kyle Okposo, Jack Quinn and Zemgus Girgensons, they summoned veterans Anders Bjork and Riley Sheahan from the Rochester Americans, refusing to recall any of their prospects.

“We have a lot of talent in Rochester … and for sure there’s guys that that are capable of coming up in providing maybe a spark, but we also balance what’s best for them and their development path,” Adams said. “And I’m looking at where they’re at right now. Those guys are really doing a nice job. Some of those forwards at really young ages in that league and don’t want to be disruptive of that, either.”

Bjork played once before the Sabres sent him back to the AHL. Sheahan took two penalties in barely nine minutes of ice time in Saturday’s 5-2 road loss to the Toronto Maple Leafs.

With Girgensons expected to return against the Canadiens and Jost in the fold, Sheahan’s stint in Buffalo could be ending.

Update: The Sabres have assigned Sheahan to Rochester.

Perhaps Jost can help ignite the Sabres. Early in the losing streak, they lost a few tight games to elite teams. But in the last week, their effort has suddenly fallen off.

Granato said the Sabres have looked “a lot more like themselves” in their two practices following Saturday’s lackluster loss.

“The situation has brought about some anxiety, some feeling pressure,” he said. “And I think when that happens and you feel that and you have anxiety, it takes away from you being you, you playing the way you would play. …

“We got off the bus (Sunday), had a short meeting and they went on the ice and were flying around better than the night before in Toronto after a two-hour bus ride. So you can tell right there the psyche is so important to what’s going on.”