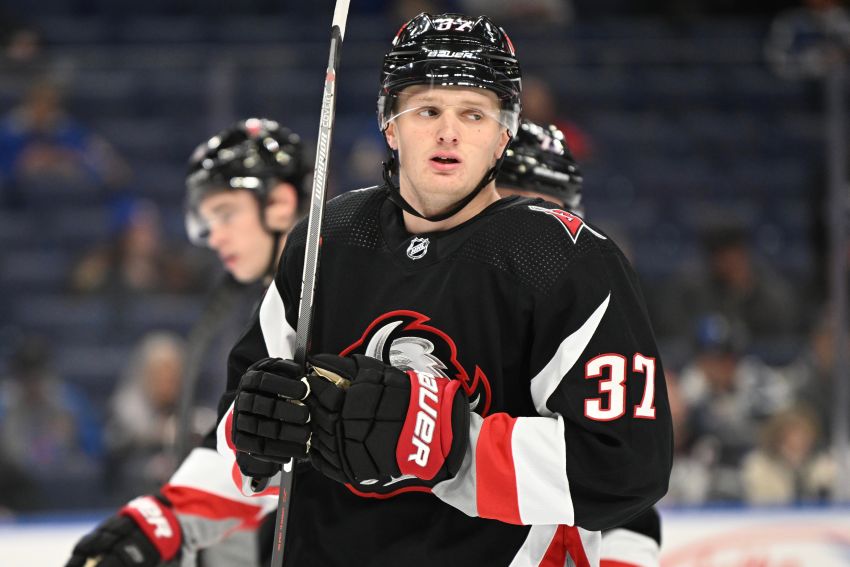 Casey Mittelstadt has scored just one goal at even strength this season. ©2022, Micheline Veluvolu

BUFFALO – Sabres winger Casey Mittelstadt’s gig on the top line is only temporary.

Center Tage Thompson and wingers Jeff Skinner and Alex Tuch form one of the NHL’s most lethal scoring trios. When Skinner returns from his three-game suspension for cross-checking, he will likely assume his regular role as the left wing beside Thompson and Tuch.

In the meantime, the 6-foot-1, 195-pound Mittelstadt, who has struggled at five-on-five this season, has a splendid opportunity to earn extra ice time and produce more offense.

“It’s exciting for me,” said Mittelstadt, whose Sabres host the Los Angeles Kings tonight. “I know it’s only a couple games. I mean, that line’s pretty special.”

Mittelstadt, 24, looked sharp in Saturday’s 3-1 road loss to the Pittsburgh Penguins, his debut with Thompson and Tuch, skating 18 minutes 21 seconds, his highest total since Nov. 12.

In Skinner’s absence, Sabres coach Don Granato felt Mittelstadt, a natural center he recently switched to wing, would be the ideal guy to promote. Mittelstadt has played with Thompson in the past.

“There’s a lot of familiarity and chemistry with him and Thompson,” Granato said. “… This is the reason why I’ve shifted him to the wing, for potential times when there’s guys out of the lineup, injured or otherwise. And this is one of them, where Casey builds his game and gets better and better. He is talented enough to play with high-end guys, clearly.”

Of course, Mittelstadt, a left-handed shot, possesses different talents than Skinner. He’s not as shifty and doesn’t move as aggressively to the net. He’s more of a playmaker.

“It’s definitely maybe a little different fit than Skinny,” said Mittelstadt, who’s also filling in for Skinner on the top power-play unit. “But, yeah, I think it’s a good fit, though. … It’s a perfect setup for me playing with two shooters like that, two righties for one-timers.”

But if he catches fire and starts piling up points at five-on-five, Friday’s game might be remembered as a turning point. He registered a season-high three assists, including two at even strength. The helpers ended a five-game point drought.

He recorded two assists at even strength in a span of 1:07 late in the second period, as many points as he had at five-on-five in the previous 11 games.

Mittelstadt and his linemates – he has mostly been paired with winger Victor Olofsson while others moved in and out – had been mired in a rut, producing little offense and getting scored against. For example, in Wednesday’s 9-4 road shellacking of the Columbus Blue Jackets, Mittelstadt and Olofsson each went pointless and registered a minus-2 rating.

Granato said defense assignments have often limited offensive contributions from Mittelstadt’s regular line. The first or second defense pairings usually go out with Thompson’s line or center Dylan Cozens’ trio. That leaves the third pairing, which has often featured recalls from the minors, for Mittelstadt’s line.

“They’ve had a mix of defenders coming in and out of the lineup and lots of guys with not a lot of games experience, and that’s really hampered offensive production for everyone because that’s where the rotation is hitting,” he said. “It’s not a slight to the defensemen who are coming in the lineup. They’re coming in and they don’t have a lot of reps and a lot of time and it’s challenging for them, too. …

“(Mittelstadt and Olofsson) were on that outer edge of thinking real offensively from a team standpoint and it’s affected their numbers.”

Simply shooting would help Mittelstadt, who has registered only 23 shots on goal at even strength this season.

“I got to do a better job of kind of getting into the areas to shoot,” he said. “I think that’s probably the bigger thing than shooting more. I’m not really a guy that’s going to shoot from the outside a ton.”

Overall, Mittelstadt has compiled five goals, 16 points and a team-worst minus-12 rating in 28 games this season. He has mustered just one goal and five points at even strength. He has also scored one short-handed goal.

He has mostly wreaked havoc on the power play.

Mittelstadt, who battled injuries last season and played only 40 games, said his odd production has made this year “weird at times.”

“Some tough games, some good games, I think maybe a little inconsistent,” he said. “I think that’s something I definitely would like to clean up here in the last (54) games. … At the same time, I’m happy to be playing. Last year was pretty tough for me. I’m happy to be healthy and feeling good.”