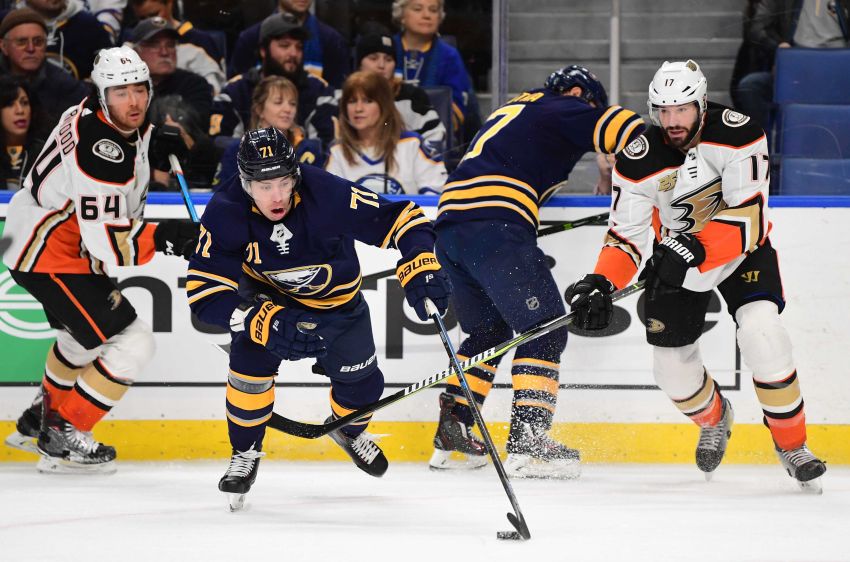 “He found a way,” Carlyle said prior to Saturday’s 3-0 loss to the Sabres inside KeyBank Center. “Superior skills, skating skills, great hockey sense, a lot stronger than people give him credit for.”

Thanks to a 23-goal, 86-point campaign, Housley finished third in the Norris voting (league’s best defenseman) in 1991-92. Eighteen goals and a career-high 97 points helped him finish fifth in the balloting in 1992-93.

Housley said Carlyle, who won the Stanley Cup in 2007 with the Ducks, is “a master of match-ups.”

Housley said he wanted to counter Carlyle’s matching by getting in a rhythm and rolling four lines.

The Sabres took Wednesday off and did not hold a morning skate prior to Friday’s 2-1 loss in Washington. While they likely wouldn’t have skated Saturday morning, they stayed home after landing in Buffalo about 2 a.m. following about an hour delay leaving Washington.

“We can’t control the other things like plane troubles and getting back here into Buffalo, but we certainly can manage our schedule and choose the times to practice heavy and try to take it easy, just knowing that our guys are in a grind,” Housley said.

Who does Housley consult with to decide if the Sabres should practice?

“It’s a little bit of everything with the performance staff, with the leadership group,” Housley said. “They have a good vibe and lot of experience on their side just to get their information and what they think we should do and also our coaching staff. We feel we’ve made some really good decisions on what the players need.”

The Sabres don’t play again until Thursday in St. Louis.

Since defensemen Jake McCabe and Lawrence Pilut returned from injuries against the Capitals, the Sabres sent defenseman Brendan Guhle back to the Rochester Americans on Saturday.

Housley said winger Jason Pominville, who missed his second game with an undisclosed injury, skated again Saturday and is “getting close.”