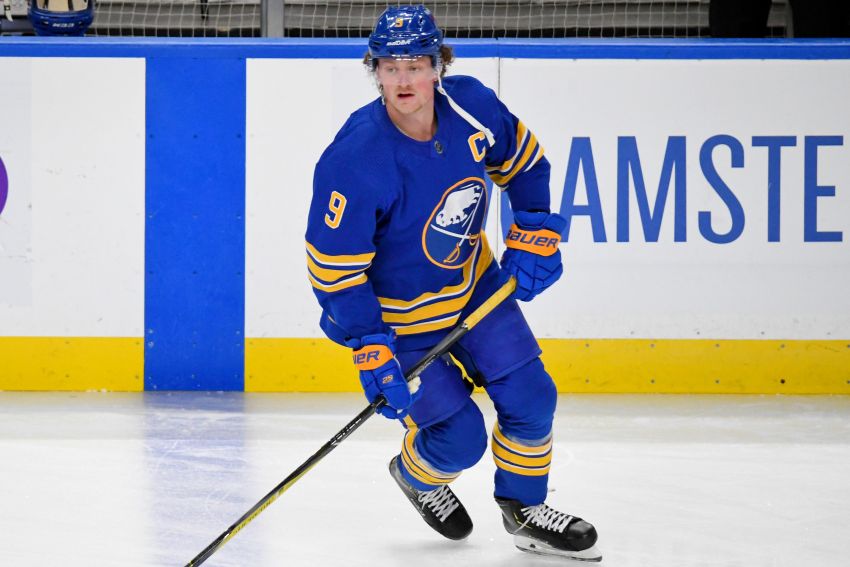 When the Buffalo Sabres hired Kevyn Adams as general manager, he made it a point to develop a relationship with Jack Eichel, his captain and best player.

“Jack is someone that I’ve bounced things off of, he’s talked to me and we have an open dialogue,” Adams said on a Zoom call Friday afternoon.

Given the Sabres’ woes throughout Eichel’s six-year tenure, some believe he could want out of Buffalo. But Adams said Eichel, 24, hasn’t requested a trade.

Adams also said he has never tried to deal Eichel. Still, teams have called and inquired about the center.

“I said this in the summer and I’ll say it again, Jack is one of the best players in the world, period,” he said. “Are people going to make a phone call and ask? Of course. And that’s the extent of it.”

“I never would get into what a player is dealing with day to day in their health,” he said. “If there’s updates, certainly I’d always be transparent with you guys for those types of things.”

The Sabres play a road game this afternoon against the New York Islanders at Nassau Coliseum.

“Jeff’s a pro,” he said. “He works every day, he shows up, and he did even through adversity. And my message to him – and I’m certainly not going to share everything I talked to Jeff about – but the quick version is I don’t think there’s a player who’s had a National Hockey League career that doesn’t face adversity at some point. It’s never a straight line to success, so don’t let it define you, and figure out a way to come out of this on the other side and be stronger and better.”

Skinner has scored zero goals in 18 games this season.

Adams said he had a long, honest conversation with Skinner’s agent, Don Meehan.

“I shared my thoughts, he shared his thoughts,” he said. “That’s a healthy thing.”

Adams said he has been “looking every day” for a goalie since starter Linus Ullmark suffered a lower-body injury that will sideline him at least another three weeks.

“What I always look at is, is there an upgrade over what we currently have?” he said. “If there is then that’s the solution, let’s do it.”

Carter Hutton and Jonas Johansson have been sharing the net in Ullmark’s absence. Adams doesn’t attribute the Sabres’ problems to goaltending.

“That is not why our record is what it is,” he said. “We’ll always look for ways to improve but overall I think they’ve been solid.”

Sabres rookie Dylan Cozens, 20, practiced at right wing Friday beside Eichel and Taylor Hall, according to The Buffalo News.

“Dylan is just so smart,” Krueger said. “It’s amazing how he has embraced and is an example of the habits we need to have going through our lineup. Age is never relevant for me as a coach when you’re within the game framework, when the puck is dropped until the final horn goes. You don’t consider age, experience; you watch and you look at what players are doing performance-wise. …

“He quite clearly is becoming very quickly an important centerpiece of what we want to build on here as we move forward. He has completely taken on the culture on and off the ice that we are striving to embed in everybody as a habit. You will see him up the lineup again tomorrow.”