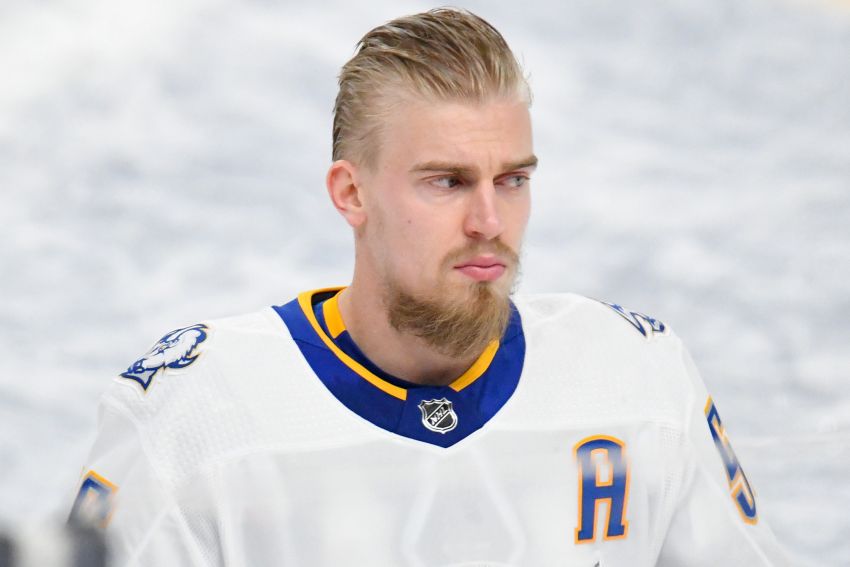 Ramsus Ristolainen was on the ice for every goal scored in Thursday’s game. ©2021, Micheline Veluvolu

In the waning minutes of first period in Thursday’s 5-2 loss to the New York Islanders, winger Matt Martin grabbed a pass deep in the Buffalo Sabres zone and skated below the goal line, seemingly boxing himself into the left corner.

But Martin decided to shoot from what looked like an impossible angle, and the puck hit goalie Jonas Johansson in the head and bounced in, putting the Islanders up 2-0 16:21 into the game.

The fluky goal sums up the Sabres’ sorry state. Nothing is going right. They’ve lost five straight games and nine of their last 11 since their COVID-19 pause ended.

The Sabres have become the NHL’s laughingstock again. Right now, it feels like they will never win another game.

They wilt under any pressure, can’t score goals and have trouble defending. They’re awful.

How long can the Sabres’ stunning decline keep going? Remember, they began the season 4-3-2, a strong start by their standards.

Is the issue Krueger’s system? The Sabres seemed to grasp it in January.

“I don’t think it’s a system issue,” said Sabres winger Taylor Hall, who scored his first goal since Jan. 14, opening night. “It’s more of a confidence issue. When you’re not confident as a player, as a team, the best thing to do is to simplify things and grow your game that way. Right now, we’re not even allowing ourselves to do that. We’re getting behind the eight ball right away.”

Hall knew it sounded silly to say following a three-goal loss, but he felt the Sabres started well Thursday.

“We had three really good shifts to start the game and then it just kind of unravels and you can see every player on our team starts gripping their stick a little bit, starts thinking out there instead of just playing and defending hard and playing hard,” he said. “We have a great group of guys in here. We don’t have a bad culture. We have a coaching staff that we believe in a lot. Right now, it’s just not working out for our team, but I believe in a lot of things that we have here.”

After Noah Dobson scored at 10:25 and Martin followed, the Sabres buckled.

“It’s a puzzle,” Krueger said. “I thought we came out of the gates first five, six minutes really well and had a good feeling on the bench, and the goals against just deflated us. We started making individual mistakes that just fed right into the Islanders’ game, their speed. It took some time to recover.”

Hall’s goal got the Sabres to within 2-1 3:08 into the second period before the Islanders pulled away.

The Islanders outshot the Sabres 45-18 and improved to 4-0 against them this season. The Sabres’ new division foe has outscored them 14-5.

“We want to be an attacking team, product of a strong defense and the principles are laid out very clear for everybody to understand,” Krueger said. “We’re just getting away from them, whether that’s mental fatigue or whether it’s a confidence issue. …

“We can’t let the emotions of the game take us off course as it did today in that phase in the first period. We just never quite recovered from that.”

Sabres defenseman Rasmus Ristolainen, who scored the other goal, said: “A lot of turnovers, not managing the puck well, and that cost us the game. I mean, everyone is trying to make plays. No one wants to (stink), no one wants to make a mistake, no one wants to be on the ice to let other team score. But, yeah, we got to figure it out.”

Ristolainen, who played his fourth game after battling COVID-19, was on the ice for every goal in the game.

‘He was in bed for more than 14, 17 days,” he said. “Not just sitting on a couch or walking around. He was in bed, in pain. I have to tell you, sadly, I expected a dip here. He fought so hard and battled so hard and competes so hard every night. You cannot be mad at that player ever. He’s as honest as it gets and self-critical as it gets.

“His situation today was clearly a product of nearly three weeks without any exercise at all. You needed to expect this.”