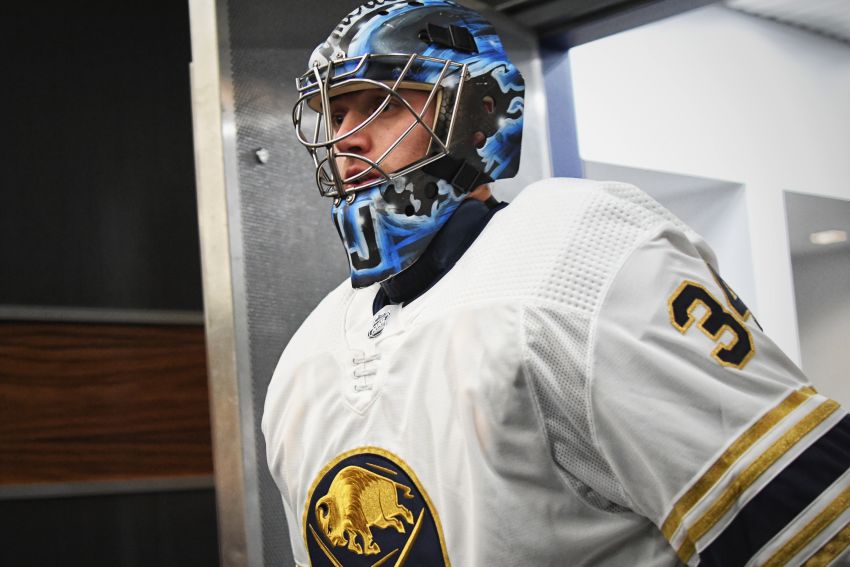 BUFFALO – In the midst of an awful stretch during another lost season, goalie Jonas Johansson’s first NHL start Thursday should’ve given the Sabres a spark.

While Ukko-Pekka Luukkonen has been tabbed the Sabres’ goalie of the future, Johansson, a third-round pick in 2014, has developed into a strong prospect.

On Thursday morning, coach Ralph Krueger said he hoped Johansson’s presence against the Detroit Red Wings could help the Sabres settle down and “think about our game … play within that game more consistently.”

Well, that certainly did not happen. The Sabres fell behind 2-0 early to the hapless Red Wings and lost a 4-3 shootout inside KeyBank Center, suffering one of their most embarrassing defeats in recent memory.

The Red Wings began Thursday on a nine-game losing streak (0-8-1) and with just 12 wins all season.

Center Dylan Larkin scored 4:23 into the game on the Red Wings’ third shot, beating a screened Johansson from the far edge of the left circle. Larkin scored again with 0.2 seconds left in the period, roofing a shot past Johansson on a two-on-one after winger Sam Reinhart coasted up the ice.

Johansson wasn’t beaten again until winger Tyler Bertuzzi’s power-play goal in front of the net 13:56 into the third period.

The rookie did not make any spectacular stops, but he looked comfortable throughout the night, making 18 saves before Larkin and winger Andreas Athanasiou scored in the shootout.

“I felt comfortable,” Johansson said. “It’s a faster pace, for sure – it’s the fastest pace I’ve ever experienced.”

Johansson said he felt some nerves during the day but they disappeared when he got to the rink and the game started.

“I just tried to enjoy it and have fun out there,” he said.

Johansson relieved Carter Hutton in Tuesday’s ugly 6-1 home loss to the Colorado Avalanche, stopping 13 of the 14 shots he faced in his NHL debut.

The Sabres dressed six defensemen and 12 forwards against the Red Wings. They scratched forward Rasmus Asplund and defenseman Zach Bogosian.

Winger Scott Wilson, who was recalled from the Amerks on Wednesday, skated at left wing beside Larsson and Zemgus Girgensons.

Wilson, 27, recorded three goals and four points in five contests after the Sabres sent him down following a two-game recall last month.

He tied the game at 2 8:29 into the third period, tipping defenseman Colin Miller’s shot past goalie Jonathan Bernier, his first goal since March 8, 2018.

Wilson appeared to score in the first period Thursday before Detroit challenged and officials ruled he interfered with goalie Jonathan Bernier.

“It was more what Wilson has been doing in Rochester, he’s really on a hot streak right now,” Krueger said of the move. “Just the way he has been playing has really impressed us. We sent him down with a to-do list, and it was less against J-S than we don’t have a lot of movement right now here within the guys that are set here, and we just feel that he has the potential to be a spark plug for us right now.”