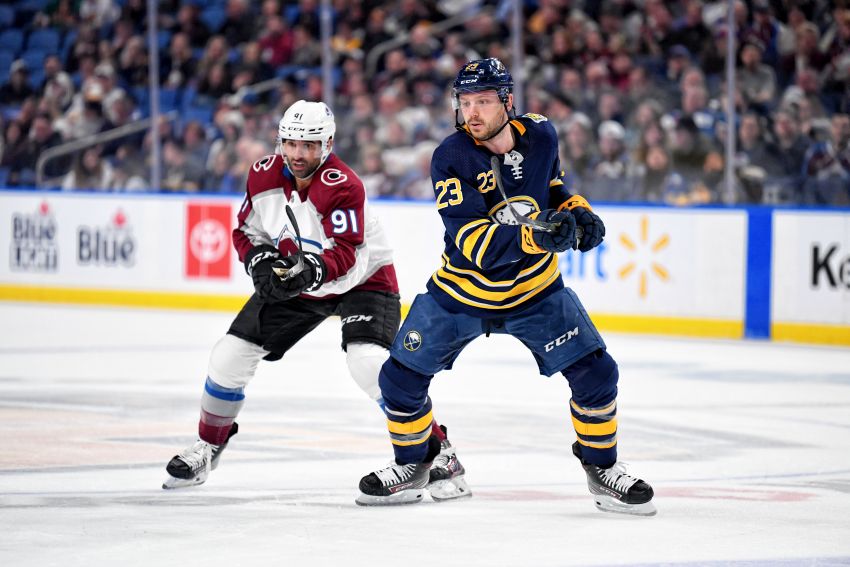 BUFFALO – This could spiral out of control in a hurry. There might be more ugly efforts like Tuesday’s uninspired 6-1 loss to the Colorado Avalanche down the stretch.

The Sabres have displayed a disturbing penchant for melting down late in the season.

Players, coaches and even regimes change, yet the sorry results stay the same.

A week ago, the Sabres began a stretch in which they play five straight home games nine of 10 overall at KeyBank Center. They believed the schedule provided an opportunity to roar back into the playoff chase.

Instead, they’ve lost three out of the first four contests, effectively sealing their fate with two months remaining in another dreadful season. They’re finished.

The Sabres started off well before defenseman Samuel Girard’s fluky goal – everyone lost sight of a puck that bounced high, allowing him to score unfettered – put the Avalanche up 1-0 at 13:12.

“The first 13 minutes we were looking at a really good hockey game,” Krueger said. “The first goal against was the kind of goal I’ve never seen before where all six guys are looking somewhere else. It was was very strange.”

Then Sabres winger Sam Reinhart responded with 0.9 seconds left in the first period, a goal that should’ve created momentum.

“The goal that we scored at the end of the first seemed to bring us back in to that start,” Krueger said.

But the Sabres imploded early in the second period, allowing four goals on six shots. The Avalanche pounced on them, going up 6-1 by the 12:59 mark.

“Our inability deal with their speed and their transition for that period of time, we seemed to be well prepared for it,” Krueger said. “I thought we began by playing the game we wanted to play, but we just deserted it.”

Krueger wouldn’t put any blame on Hutton, who stopped only eight of the 13 shots, drawing the crowd’s ire.

“I don’t think it’s fair to put this on Carter,” he said. “People look at the shot (counter), but they outchanced us … even when the shots were quite equal there. It wouldn’t be fair it put this one on him, it’s all of us.”

When the period mercifully ended, the restless crowd of 16,859, which responded to Johansson’s first NHL save by giving a mild Bronx cheer, booed the Sabres.

Many of the fans then bolted for the exits.

“Today was (crap) so it’s hard to talk about what happened today,” Sabres defenseman Rasmus Ristolainen said bluntly. “But overall, I think we took a step forward this year. But it’s obviously not enough. It hasn’t been enough steps.”

Since the Sabres started their first season under Krueger 9-2-1, they’ve mustered only 34 points, going 14-21-6. Only the hapless Detroit Red Wings have compiled fewer points.

The Red Wings visit town Thursday. Perhaps playing one of the worst teams in recent memory can help ignite the Sabres, who were asked if they quit after Colorado’s second-period outburst.

“We had done quite a bit well up to that point (in the second period) and it seems guys started getting a little softer as opposed to you would hope that it would wake guys up a little bit and we would start playing harder,” he said.

A year ago next week, the Sabres started a rotten stretch in which they lost 21 of 24 games. Given the way they usually buckle under adversity, this could be a long winter.