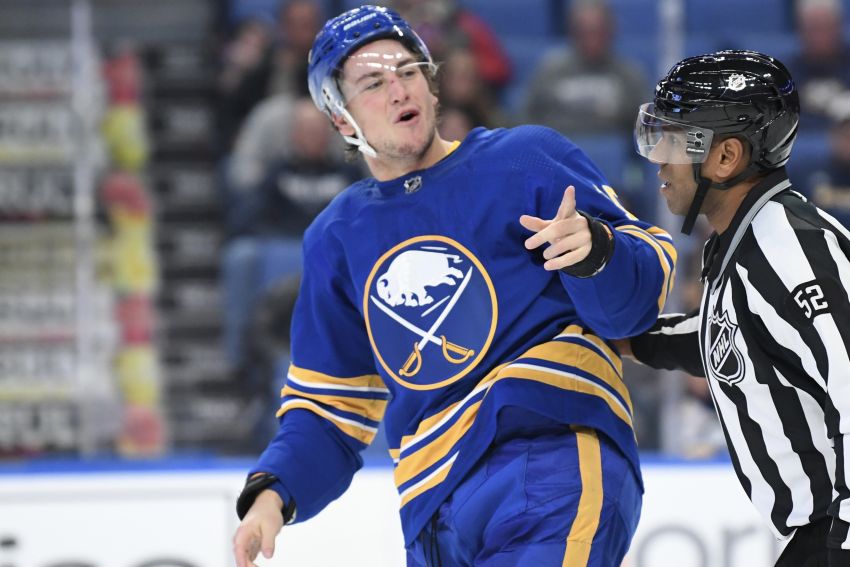 John Hayden skates off the ice following one of his fights this season. ©2022, Micheline Veluvolu

BUFFALO – Barring injury, winger John Hayden will establish a new career high in games played later this month. After bouncing around the NHL, often as a spare forward, the Yale product has earned regular duty throughout most his first season with the Sabres.

Hayden, 27, has thrived under Don Granato, a coach he knows well from their days together at the U.S. National Team Development Program and later with the Chicago Blackhawks.

The Sabres expect the 6-foot-3, 223-pound Hayden to be a gritty, tenacious presence who can excel while playing short minutes.

Granato has watched Hayden, who has fought a team-high five times this season, evolve and grow more comfortable in that role over the last decade.

“What he’s added to his game is he’s just so much more comfortable knowing what he brings to the game, knowing his role, his responsibilities, how to be effective within those roles and situations, ice time and linemates that the coach gives to him or not,” Granato said.

Three or four years ago when Granato coached Hayden in Chicago, he was still working toward becoming that type of player.

“He does an amazing job of keeping himself ready,” Granato said. “But his sense of objective of knowing the situation and what needs to be done within his skill set, he’s really grown in that area. And he’s established himself as a very effective NHL player within that role.”

Hayden was effective in Sunday afternoon’s 4-2 loss to the Dallas Stars, registering five hits in 12 minutes of action.

The American and his linemates, center Cody Eakin and Anders Bjork, performed so well in Wednesday’s 5-1 win over the Toronto Maple Leafs that Granato awarded them more ice time than the trio of Rasmus Asplund, Peyton Krebs and Victor Olofsson.

Hayden surpassed the 14-minute mark for the fifth time this season, while Eakin and Bjork skated more than 15 minutes.

Granato said at its best, Hayden’s line is all over the opposition.

Of course, Hayden, who has recorded just one goal and three points in 47 games this season, would like to contribute more offense. Despite having a checking role these days, he believes his style hasn’t changed much.

“I still intend on being productive (offensively) at this level,” said Hayden, who played a career-high 54 games for Chicago in 2018-19. “But the way I produced at other levels or even earlier in my career was a product of a lot of these intangibles or basic components of the game. … I don’t think my game has actually changed a tremendous amount.

“Maybe the line I’m on or some of the roles that I’m put in. But overall I think my game is pretty similar to what it’s been in the past.”

Sabres defenseman Jacob Bryson will played beside Rasmus Dahlin again Friday, his second game on the No. 1 pair. Bryson, a left-handed shot, has been playing on the right side for the first time this season, a challenge he welcomes.

“It’s very different,” Bryson said. “Playing left side my whole life, you’re always looking up that side of the rink, but on the right side, it’s a totally different point of view.”

He added: “I’m finding more of a groove on that right side. With my feet and mobility, I think it can almost be beneficial for me.”

Notes: Sabres prospect Jack Quinn played for the Rochester Americans in Friday’s road game against the Belleville Senators, his first action since suffering a lower-body injury Jan. 20 in Buffalo. … The Sabres scratched center Mark Jankowski (healthy) for the fourth straight game. … Ex-Sabres winger Marcus Foligno has scored a career-high 18 goals for the Wild this season.