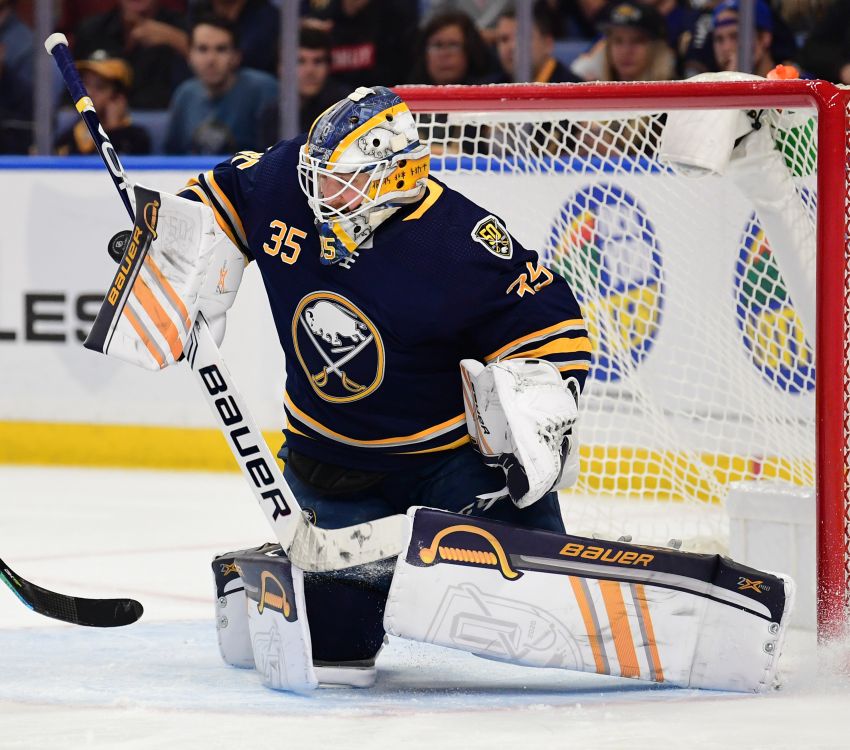 BUFFALO – Sooner or later, the unheralded Sabres line of Johan Larsson and Zemgus Girgensons and Kyle Okposo was due to erupt for some goals.

For more than four games, the trio consistently generated offense, buzzing around the opponent’s zone.

A combination regarded as the fourth just a week ago has quickly morphed into the Sabres’ most reliable line.

But other than one Okposo goal, the players hadn’t done any scoring.

So when they created both Sabres goals in Friday’s 3-2 shootout win over the Florida Panthers – Larsson scored and Okposo and Girgensons assisted on defenseman Marco Scandella’s goal – the bench went crazy.

“I’ve never seen a bench cheer so much for another line having success,” coach Ralph Krueger said after the Sabres improved to 4-0-1. “The entire bench just erupted on both of the goals. To see all that hard work, the grinding they’ve been doing the first five games is paying off (is) big.”

Of course, the Sabres needed more than two goals before the crowd of 15,638 inside KeyBank Center.

After Larsson scored late in the second period and Scandella made it 2-0 2:02 into the third, they sat back, allowing the Panthers to attack and roar back.

Mike Hoffman tied the game with 10.4 seconds left in regulation. Evgenii Dadonov’s goal 6:15 into the third period ignited the Panthers, who pumped outshot the Sabres 19-4 in the third period.

Goalie Linus Ullmark, who made 41 saves, kept the Sabres in it, allowing captain Jack Eichel and center Casey Mittelstadt to secure the shootout win.

The Sabres also blew a two-goal lead late in Wednesday’s 5-4 overtime win against the Montreal Canadiens.

“We have to stay aggressive,” said Okposo, who had two assists in a game for the first time since Nov. 19. “I thought we just sat back a little bit. We didn’t have as many shifts in the offensive zone. … You tend to sit back when you have a lead.”

Ullmark’s splendid play, however, covered up the Sabres’ late collapse. Fresh off a 40-save outing in Monday’s 4-3 overtime loss road loss to the Columbus Blue Jackets, he looked sharp again.

The Swede outdueled Sergei Bobrovsky, who stopped 30 shots for the Panthers.

“World class goaltending on both ends, lots of slot chances, lots of scoring chances,” Krueger said. “What we were able to eliminate really was the second chances.”

Ullmark said: “We never hesitated. We stayed calm on the bench. No one got upset or anything like that. We just thought about what happened, let it go … and try to get those two points.”

What has made the line, which also played together late last season, mesh so well?

“We’re working,” Okposo said. “All three of us just kind of go hunt pucks. Get on the forecheck and go hard. The other guys support. I think when you have three guys really committed to pressure something just happens. It works.”

Too much work earned Sabres defenseman Rasmus Dahlin, 19, a seat on the bench for the final nine and half minutes of regulation.

Krueger played second-year star in overtime. Still, why sit one of your top talents?

“We’ve gone 11 days in a row without a day off to start the season,” Krueger said. “There’s been a lot of effort invested in getting the results that we’ve had and we could see a few guys tapering off. We were protecting him actually in that little stretch. …

“We knew Florida was going to push hard, and we went a little more with experience there. But Rasmus has played outstanding and is learning and growing every day. There’s going to be moments like that where we’re going to reduce the lineup to go with the guys we think have the best chance of closing.”

The Sabres have won three straight home games to start a season for the first time since 2008-09.