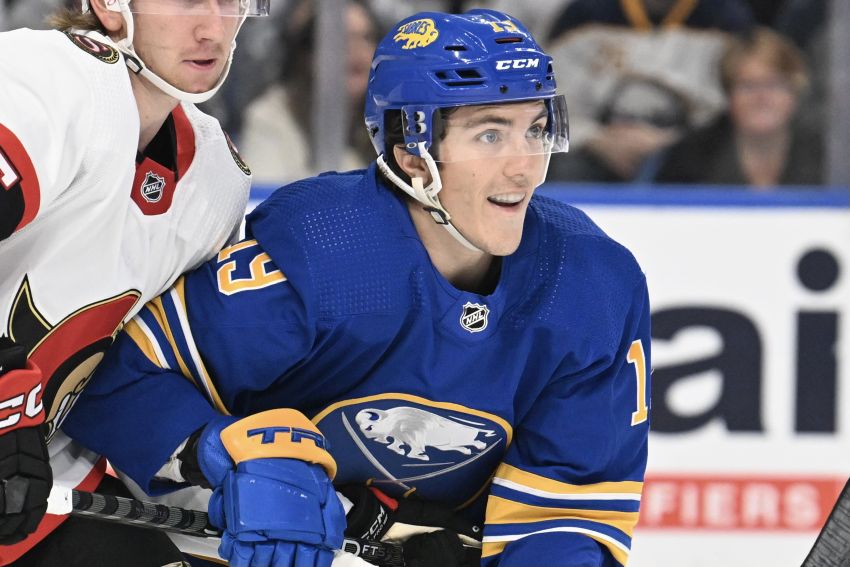 BUFFALO – The Sabres inserted center Peyton Krebs for Thursday’s 5-4 loss to the Colorado Avalanche, just his second appearance in the last six games.

To make room for Krebs, a healthy scratch the previous three contests, the Sabres sat out winger Vinnie Hinostroza.

That Krebs, 21, had been bumped out of the lineup wasn’t surprising. He sat out two games in late October when the Sabres briefly began rotating forwards. He had mustered zero goals and just three assists in 17 outings this season entering Thursday’s game.

The Sabres, of course, don’t usually let members of their young core sit for very long. But coach Don Granato believes every day Krebs spends in the NHL offers him an opportunity to develop.

“I’d be more worried about an older guy sitting than a younger guy, honestly, because they’re absorbing so much,” Granato said following Tuesday’s practice at KeyBank Center. “Even the practice today, Peyton’s in practice, he’s fully engaged flying around. So the psyche’s good, he’s competing hard, and he’s going against, on a rush, Mattias Samuelsson, Rasmus Dahlin and the next rush Jokiharju. Like, elite players, and the pace of players tracking him down, that’s what he needs.”

Granato said that despite recently being scratched, Krebs is “still getting better every day.”

“He got better today, more so than other guys, by virtue of that, so I worry less about a younger guy not getting the minutes, I think, too many minutes, you’re in it and you just need to just step back,” he said. “And you see lots of growth with players. (Dylan) Cozens, a perfect example, in the offseason, because they can actually step back and reflect. And it helps them grow. And to be able to do that during the regular season is an actual luxury.

“And I speak from that being around many dozens of players that are NHL players that I’ve had as a coach around the league. This does not hurt a young player. … For a younger player, there’s so much stimulus every stimulus that comes in they need to take in.”

Mittelstadt has been struggling at center, so shifting him to left wing offers a fresh look and lightens some pressure.

Granato said Sabres defenseman Ilya Lyubushkin, who blocked a shot in Monday’s 6-5 overtime loss to the Tampa Bay Lightning, has “gotten much better each day.”

“So the imaging we received back was very good, positive now,” he said. “And he is now it’s a pain tolerance, it’s going to be a day-to-day challenge.”

The Russian has also been dealing with pain from a shot he blocked Oct. 18.

Former Sabres center Riley Sheahan, whose contract was terminated Monday, has signed a contract with EHC Biel-Bienne in the Switzerland.

Sheahan, 30, did not report to the Rochester Americans last month following a brief recall.