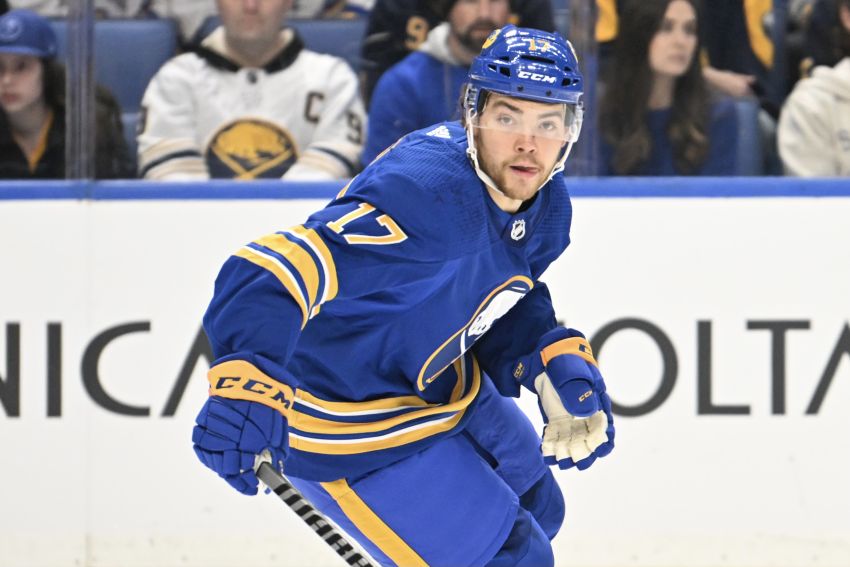 BUFFALO – The struggles and other experiences Sabres center Tyson Jost has endured since entering the NHL as a teenager have helped him develop a unique perspective.

Jost has already played 358 NHL games, the fourth-highest total among Sabres skaters. Having been drafted 10th overall in 2016, the Colorado Avalanche initially cast him in a scoring role. When that didn’t work out, he fell down the lineup and was traded last season.

He lasted only 33 games with the Minnesota Wild before the Sabres claimed him off waivers on Nov. 19.

“They gave him a top-six role in Colorado and he worked his way down to fourth line, then a trade and then on waivers,” Sabres coach Don Granato said following Tuesday’s practice at KeyBank Center. “So he’s got perspective and career experience and he’s only 24. He brings all of that in here with a sense of objective.”

He added: “He brings an awful lot.”

The 5-foot-11, 187-pound Jost clearly senses he might have a career-changing opportunity with the Sabres. In his first four games, he has consistently showcased an aggressive two-way style while producing offense, most recently between Zemgus Girgensons and captain Kyle Okposo.

“I always liked his game,” said Okposo, whose Sabres play a road game tonight against the Detroit Red Wings before hosting Colorado on Thursday. “You get different opportunities in your career, and that’s what this game is about. It’s a lot about timing. You just need someone to believe in you at a certain point, and then you got to take advantage of your opportunity.”

Granato’s belief in Jost has helped him transition smoothly to the Sabres. He said he feels comfortable playing for Granato – “His communication’s great and his message is awesome,” he said – and general manager Kevyn Adams.

“Then the team aspect, just a lot of great guys in this locker room and everyone’s hungry to get better and willing to get better, and that’s kind of exactly who I am as a person, too,” Jost said.

Jost doesn’t lack confidence. While he has never scored more than 12 goals in an NHL season and has 48 goals in his career, he said he “100 percent” believes he can reach a higher level offensively.

“I know it’s going to come,” he said. “I just need to be in the right opportunity and grow as a player and keep my confidence and rhythm and stuff will all work out.”

Jost enjoyed his best outing with the Sabres in Monday’s 6-5 overtime loss to the Tampa Bay Lightning, scoring first goal this season. While skating 18 minutes, 9 seconds, his highest total since Oct. 19, 2021, Granato said he displayed the “maturity” and “situational awareness” that are products of his experience.

“When he goes on the ice, he’s got 18 shifts, he knows he can’t score 18 goals, what’s the job that needs to be done?” Granato said. “And you put Okposo and Girgensons on (his) wing and they know they are not going to score 18 goals in 18 shifts. So what’s the play to be made? It might be as simple as putting it behind a defenseman and making them work and eventually, like (Monday), here’s a chance to score, I can discern between that and what job I need to get done. I’ll try to score a goal, and he’s not giving up three chances against or taking risks to score goals.”

On paper, it looks like Jost centers the fourth line. But it has been outperforming and earning more ice time than the struggling trio of center Casey Mittelstadt and wingers Rasmus Asplund and Victor Olofsson.

In reality, Jost, Girgensons and Okposo comprise the third line.

“We’re just hard on pucks and relentless and tenacious,” Jost said of why the trio has thrived. “Then we let our skill kind of take over once we get that down pat and get in the offensive zone from our forecheck. That needs to be our identity.”

Mittelstadt’s line was awful against the Lightning, mustering just one shot on goal and generating a wretched Corsi For of just 15.4, according to NaturalStatTrick.com

Mittelstadt and Olofsson have been key members of the Sabres’ second power-play unit, so Granato doesn’t want to yank them from the lineup.

“Five-on-five, we need to do what we can to help them be better and more effective,” he said. “But the other part is power play, and Mittelstadt today has more points on the power play (nine) than Alex Tuch and Jeff Skinner. He’s in the top 15 in the league for number of minutes on the power play in production. So we don’t have a problem with Mittelstadt there.”