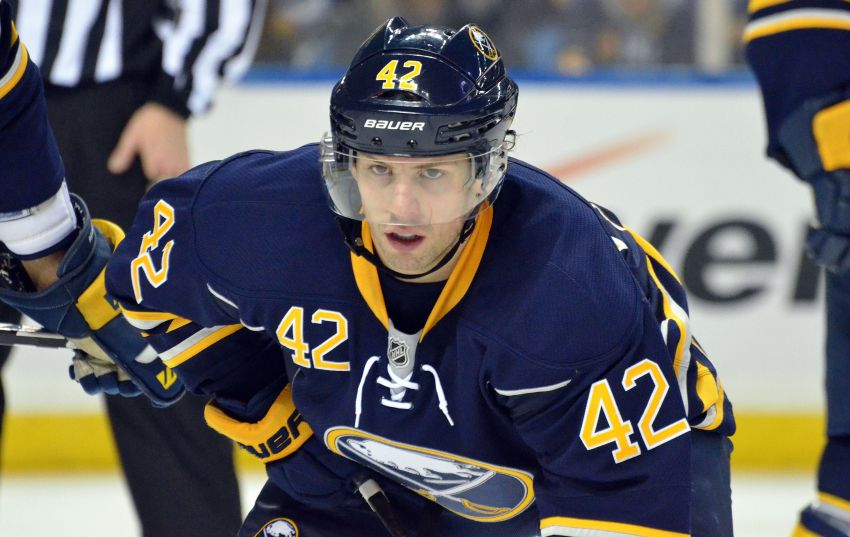 BUFFALO – As Nathan Gerbe approaches 100 percent following offseason back surgery, the 5-foot-5 Sabres winger has regained his confidence, ramping up his tenacity and performing like the fearless, speedy pest from the past.

It appeared his long offensive slump – he hadn’t scored since March 10, a 20-game drought – would soon be history.

Sure enough, the 25-year-old dazzled in the Sabres’ 4-3 shootout triumph in Florida, scoring two nifty first-period goals before he held the puck on a late two-on-one break beside Tyler Ennis with the Sabres up a goal.

But Ennis couldn’t coral Gerbe’s pass, and a golden opportunity was botched.

Hindsight being 20-20, Gerbe acknowledged the obvious Friday after the 14th-place Sabres, winners of two straight, prepared for this afternoon’s contest against the New Jersey Devils at the First Niagara Center.

“I should’ve shot,” Gerbe said following practice at the Northtown Center in Amherst. “Now, looking back on it, I drifted away from the net and tried to make a pass to Tyler. Obviously, if the pass connects, Tyler’s got a good chance at an open net.

“But a tight game like that, I got to shoot the puck and hopefully score and ease the tension.”

Still, one mistake shouldn’t mar a breakout performance. It’s been a long, grueling road back for Gerbe.

The Michigan native underwent a procedure called a Discectomy L5-SI for an L4 herniated disc in July. He was first injured when Philadelphia’s Marc-Andre Bourdon rammed him head-first into the boards on Dec. 7, 2011. He kept playing, but the injury worsened over time.

Gerbe couldn’t rush back. As his locked-out teammates bided their time elsewhere during the fall and early winter, he was rehabbing at the team’s facilities.

“I didn’t want to end up back in the hospital, back in surgery,” Gerbe said. “I don’t want to mess anything up. So I took the process slow. I started to feel better the last 10 games or so skating. Just feeling more comfortable, using my speed, using my strength and trusting my back, and I think that’s the biggest thing.”

Gerbe finally returned Jan. 24. If the season had been played fully from the start, he would’ve missed about half of it.

Challenging hulking opponents, something he must do to survive in the NHL, proves he’s comfortable again.

“Well, I’m a player that plays with fire,” Gerbe said. “I try to walk that fine line of being aggressive and obviously not being undisciplined out there. That’s my game. I use it to agitate and create energy and create scoring chances.”

His minutes have increased with his effectiveness. He played a season-high 17:27 on Thursday, his first-two goal game since April 8, 2011.

“His energy level has been really good, so he was making a lot happen with his feet and getting to pucks first,” Rolston said.

Gerbe opened the scoring Thursday, stopping in the right circle and cutting sharply before roofing a shot in.

He scored again later in the period, putting a nice move on Erik Gudbranson in the right circle and beating Panthers goalie Scott Clemmensen again as he fell to the ice.

“I know it’s a process,” Gerbe said recovering. “I prepared myself for that mentally. I wasn’t kicking the can too much. I knew that if I stick with it, good things will come if I keep working hard, keep working on my strength.”