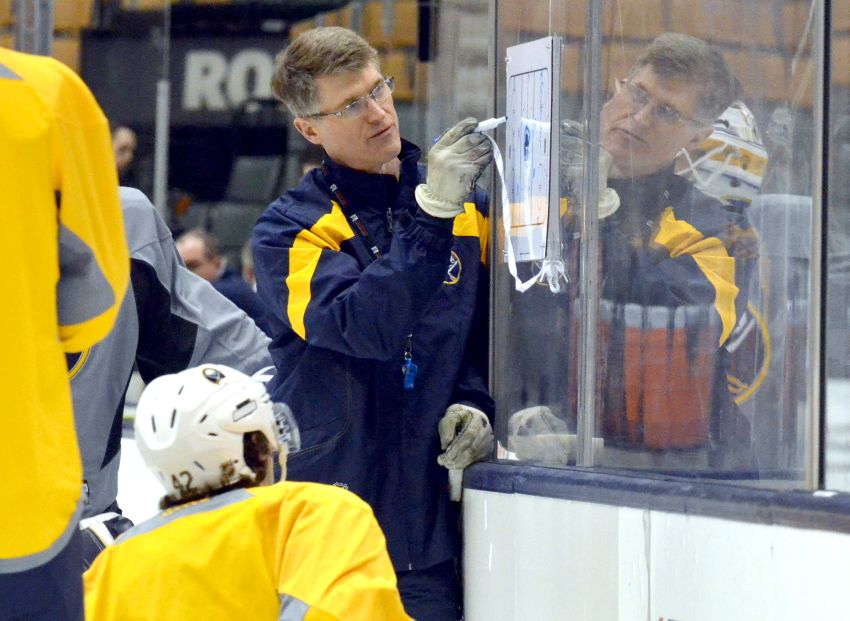 BUFFALO – Twenty-seven years ago, shortly after the junior St. Claire Shores Falcons had lost the national championship in triple overtime in Sioux City, Iowa, Jeff Jackson made a promise to Ron Rolston, his 19-year-old captain.

The coach was moving up from the North American Hockey League to take an assistant gig with Lake Superior State. Meanwhile, Rolston was about to start a three-year NCAA career at Michigan Tech.

“I remember telling him, ‘Someday I’m going to be a head coach in college hockey,’” Jackson, now the coach at Notre Dame, told the Times Herald by phone Thursday, “and I’m going to hire you as my assistant coach.’”

“Within a week of me becoming a head coach in college hockey I got a phone call,” Jackson recalled.

Jackson hired Rolston, who he called “a little raw” as a coach. But Jackson respected Rolston greatly. He believed he possessed a great hockey mind, a terrific temperament and an eye for talent.

Today, Rolston’s the Sabres’ interim coach, the man in charge of fixing a $65 million mess. Those who worked with Rolston on his journey to the big leagues recall a smart and passionate assistant coach who evolved and matured over the years.

None are surprised he cracked the NHL.

“He became everything I expected him to become when he played hockey for me a long time ago,” Jackson said.

“I would say without question, 100 percent that he is ready for the job,” said Brian Rolston, Ron’s brother and a veteran of 1,256 NHL games.

With graying hair and glasses, Rolston plays the part of a studious NHL coach well, always acting calm and measured. But he’s evolved over time.

As a young assistant, Rolston “was a lot more comical, let’s put in that way,” Jackson said.

“He had a real effervescent personality to him,” Jackson said. “He was a funny guy. He had a good wit about him.”

Over the years, Jackson said Rolston “became a little bit more like a professor.”

Rolston still has the same personality, at least privately.

“He’s actually a funny guy,” said Mark Morris, Rolston’s coach during his three years as an assistant at Clarkson. “Most people won’t see that until you’ve earned his trust. But he can bust on you. He’s pretty witty and can be sarcastic at times.

“So until you get to know him or he lets you in that inner circle, you might get the wrong impression of him.”

Back in the 1990s, that personality helped Rolston relate well to his players. He was young, knew their music and had a brother who would reach the NHL. Rolston quickly developed confidence communicating and earned respect.

In 1996, Morris hired a “jack-of-all-trades” in Rolston, who handled every facet of the game – offense, defense and recruiting – in addition to doing video work and using his fitness expertise, an additional skill that impressed Jackson and Morris long before teams carried strength coaches.

Those associated with Rolston always mention the details. Few prepare as well as him. He then relays everything through teaching, a skill vital in today’s NHL with players getting younger and younger, Brian Rolston said.

“It’s paramount to have a good teacher around because these kids that come in, they’re super skilled … but most of them I don’t think know exactly the little things of the game that need to taught on a daily basis, and that’s something that is a strength of Ron’s,” Brian Rolston said.

Morris said he marveled at the time Ron Rolston spent preparing players for the game.

“If it wasn’t breaking out video, it was showing them the finer points of the game or in the weight room counting out every rep and telling him why they were doing it,” Morris said.

­Make no mistake, Rolston, whether he shows it or not, is an intense coach.

“He’s gotten more mature over the years and has learned the right way of handling himself,” said Brian Rolston, who played under his brother his freshman year at Lake Superior State. “There’s a lot of passion there, for sure.”

Some of that passion, what Morris called seeing Ron Rolston “a little bit ruffled,” came out when they played shinny in track suits with extra players prior to games.

“He wanted to win every game,” Morris said. “He was not holding back one bit when he was on the ice. I know that he carries that same type of focus when he coaches. It’s more of a calculated type of thing.”

Going to the next level

Jackson said he had spoken to Rolston two or three times about taking a shot at professional hockey.

“I had an idea what pro hockey was all about,” said Jackson, a New York Islanders assistant coach in 2003-04. “I thought that he had the right personality, temperament to coach at least in the American League and then possibly move on the National Hockey League.”

Morris had told Rolston he “saw him being an excellent guy to teach pros because he was more current with the guys.”

In the summer of 2011, the Sabres recruited Rolston to lead the Rochester Americans, their AHL affiliate. He barely lasted a season and half there before the Sabres promoted him to replace Lindy Ruff on Feb. 20.

“I know how exciting it must’ve been for him to get behind the bench,” Morris said. “But it certainly didn’t happen the way he hoped it would’ve happened. It kind of came a little quicker than I’m sure anybody expected. I’m sure he’s respectful of Lindy.”

“He’s in to try to fix everything overnight,” he said. “I know it’s a huge undertaking to try to settle things down and get things moving in the right direction.”

Rolston’s already on the clock. Sabres general manager Darcy Regier has said the 46-year-old could keep the job if he does well.

“Given time, as they find their way whatever changes need to be made, I’m sure that he’ll be fine,” Morris said. “I just think … to throw anybody into a situation like that has to be a huge challenge.

“Unfortunately, anybody that’s a skeptic is probably going to think, ‘Who is this guy?’ But I can assure you that he’s top shelf. I have met a lot of people in the business, but I hold him right up there with some of the most well-rounded people that I’ve ever had the pleasure of working with.”