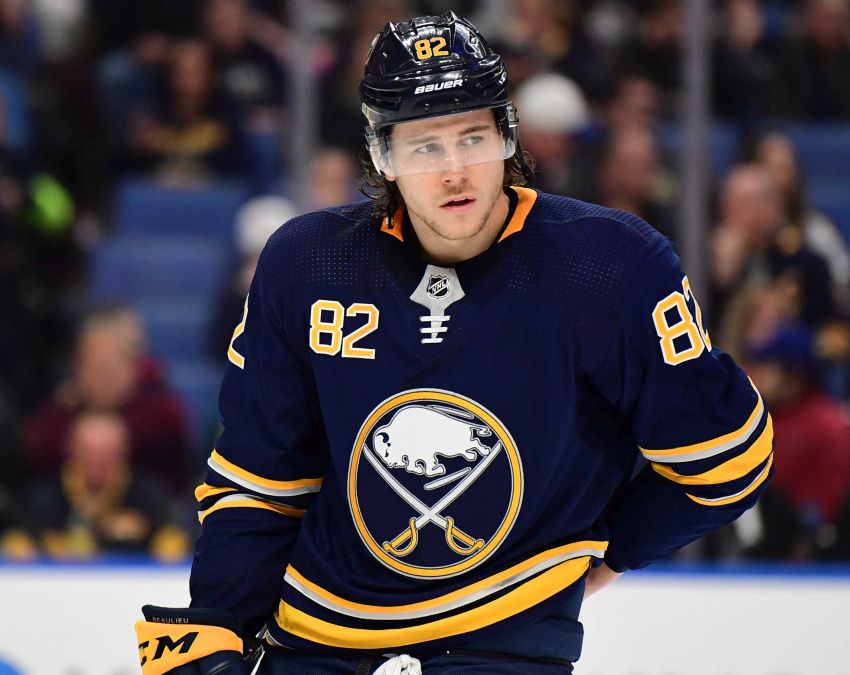 TORONTO – Last month, during a stretch in which he sat out 21 of 25 games as a healthy scratch, Buffalo Sabres defenseman Nathan Beaulieu requested a trade.

So perhaps the Sabres will keep Beaulieu past today’s 3 p.m. trade deadline.

Update: The Sabres have traded Beaulieu to the Winnipeg Jets for a sixth-round pick in 2019.

“No one really likes this day, to be honest,” Beaulieu said this afternoon inside Scotiabank Arena. “I’m just going to try to keep everything to myself. There’s an important hockey game tonight, so I’m going to try to look toward that.

“As of now, I’m a Buffalo Sabre, so I have to worry about the game tonight. There are a lot of distractions right now, so it’s obviously tough. It’s new ground for me as well. You just kind of want the day to be over.”

Update: Earlier today, Beaulieu acknowledged sitting out “was definitely the toughest thing I’ve had to deal with.”

“I never thought I’d find myself in that position,” Beaulieu said. “Obviously, it was very difficult. Sometimes you don’t always get the reasoning or the answer you want. But there’s going to be ups and downs for careers.”

Sabres center Evan Rodrigues said of the acquisition: “It shows they believe in this group. I think we have a big belief in here and obviously adding someone like that is going to make us more dynamic, especially offensively. He’s a good puck-moving defenseman.”

So far, after acquiring defenseman Brandon Montour from the Anaheim Ducks on Sunday night, the Sabres have stayed quiet on the trade front today.

Montour, 24, won’t play tonight, according to the Sabres. He is scheduled to meet the team in Toronto.

“He’s a highly skilled puck-moving defenseman that can join the rush, and that’s the way we want to play,” Housley said. “It’s going to be a great fit for our team.”

Check back later for more on Montour.

The Sabres will make one lineup change tonight, inserting winger Kyle Okposo for Danny O’Regan, who was sent back to the Rochester Americans this afternoon.

In others news, Sabres center Casey Mittelstadt (sick) and defenseman Marco Scandella (upper body) skated this morning, although neither will play.

Update: In a move that will make Tage Thompson eligible for the AHL playoffs, the Sabres sent the winger to the Amerks this afternoon.