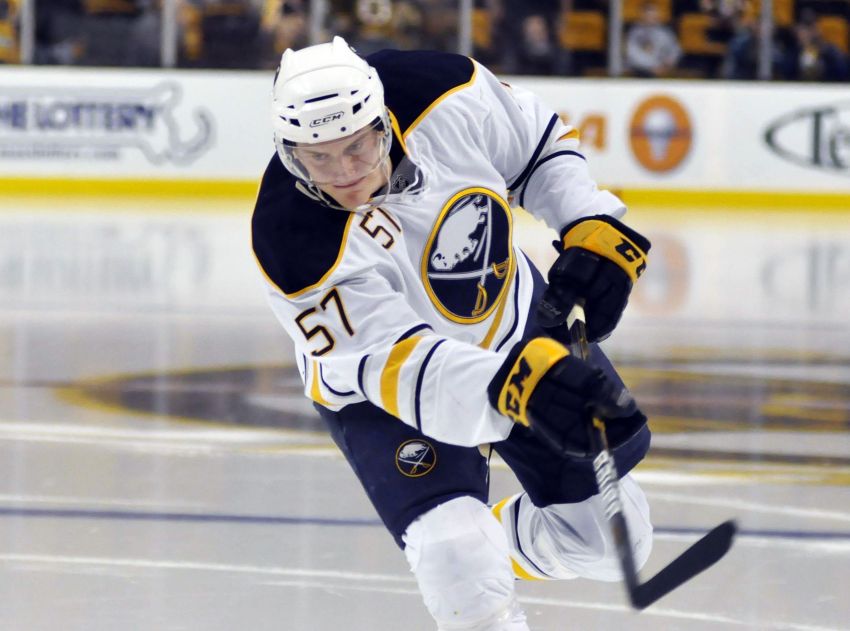 “But once we figured out what it was, I knew it would be pretty quick,” Myers said Tuesday after skating about 90 minutes with some Sabres teammates inside the Northtown Center. “I didn’t want to push it to try to come back too early in case the season did come back. That helped me out.”

Myers, who was injured Dec. 7, returned and played one game before the 113-day work stoppage ended Sunday. He arrived back in Buffalo late Tuesday.

“Obviously, we don’t want to be in that situation in the first place, but it was a great alternative,” he said. “The team was very good to me.”

Myers even played a game against Sabres winger Thomas Vanek, whose status as national hero in his native Austria he had never fully grasped until he witnessed it up close.

Myers compiled three goals, 10 points, 37 penalty minutes and a minus-7 rating in 17 games, hardly strong numbers from someone who’s often been an elite performer during his three NHL seasons.

“Good,” Myers said about his play overseas. “It’s a different game, a different-size ice, a lot more skating. The way you play the game, it’s an adjustment.”

Myers had just finished a pregame meal and was driving home when an Austrian teammate followed him and informed him the lockout had ended.

“I thought he was driving back to his house, but he ended up pulling into my driveway, so I rolled down my window and asked him what was going on,” Myers said. “He ended up telling me. I had no idea. I rushed into the house, checked the news and was pretty excited.”

Thursday was Myers’ first day back skating here. Some teammates joked the 22-year-old, who received a $10 million signing bonus on July 1 as part of the seven-year, $38.5 million extension he inked prior to last season, owed them a meal.

“That comes with the territory,” Myers said.

NHL coaches can’t run practices until the new collective bargaining agreement’s fully ratified, so former Sabres Andrew Peters and Jay McKee put some of their ex-teammates through the ringer Thursday with specific drills from Sabres coach Lindy Ruff and his staff.

“I was a little rusty. Jet lag’s catching up to me a little bit,” Myers said. “The next couple of days I should get back into the rhythm of things.”

Clearly, Myers can’t wait for the NHL season to start. He endured a rough 2011-12 campaign, getting scratched once before breaking his wrist in November and then his ankle in March.

“It’s been a long wait,” Myers said. “Obviously, going to Austria helped me keep my mind off things a little bit. Buffalo’s always been home. … I think everyone’s pretty excited to be back.”

Sabres backup goalie Jhonas Enroth, just back from a short stint with a second-tier team in his native Sweden, recently experienced an arduous travel day.

He woke up at 5:30 a.m., bused eight hours to a game and allowed four goals before another eight-hour ride back.

“It was pretty tough to stay on the bus eight hours and then go out and play,” Enroth said. “It’s a little bit different.”

The 6-foot-8 Myers on being able to look new teammate John Scott, a 6-foot-8 tough guy, in the eye: “It’s a little different. I’m going to have to ask him how he put on a little bit of weight.”

Scott weighs 270 pounds, about 50 more than Myers. Ruff joked Wednesday he “got a sore neck” from talking to Scott.

The Sabres will be holding a “Fan Appreciation Sale” – 50 percent off merchandise inside the Sabres Store at the First Niagara Center – from the beginning of training camp through the end of the first home game.

The start of camp or the season hasn’t officially been announced yet.

The Sabres announced Thursday that individual game tickets for the regular season will go on sale at 10 a.m. Tuesday.

New mini-pack tickets will go on sale at 10 a.m. Monday.