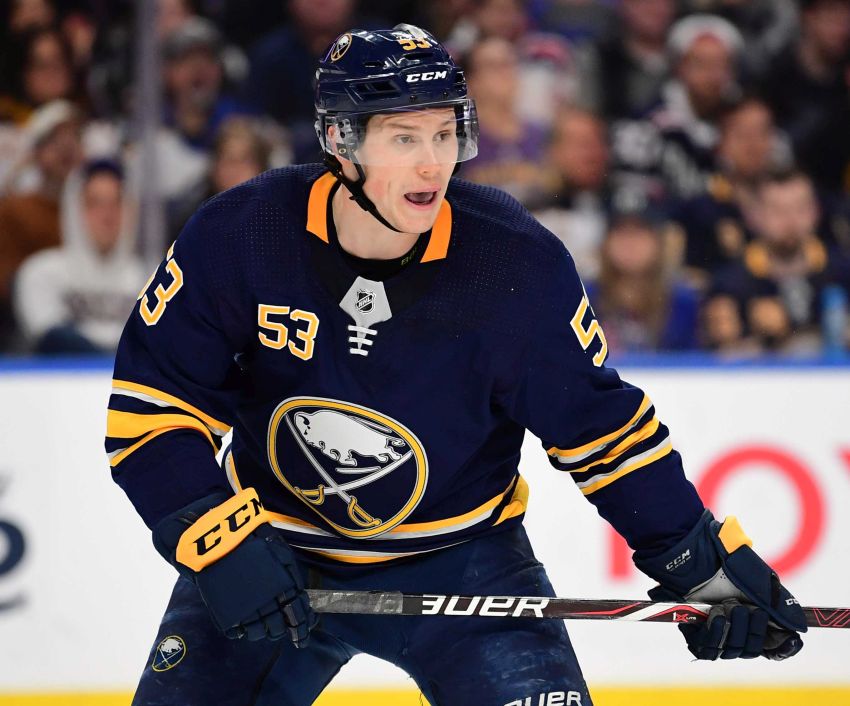 BUFFALO – Three-quarters into the season, Jeff Skinner hasn’t shown many signs of cooling off. Having scored a team-high 36 goals through 60 games, the slick winger could become the first Sabre to hit the prestigious 50-goal mark in 26 years.

Entering this afternoon’s home game against the Stanley Cup champion Washington Capitals, Skinner is scoring at a torrid 49-goal pace over his first season with the Sabres.

While Skinner, 26, hasn’t scored in the last three outings, he has displayed dynamic consistency all season, never going more than four games without scoring.

It’s hard to imagine where the Sabres, who rank 10th in the Eastern Conference, would be without Skinner, an NHL All-Star.

Would they be the league’s worst team?

Skinner, whom general manager Jason Botterill fleeced from the Carolina Hurricanes on Aug. 2, is set to hit unrestricted free agency following the season. The trade deadline hits at 3 p.m. Monday, meaning this afternoon’s game at KeyBank Center could, theoretically, be his last with the Sabres.

But given the supreme chemistry Skinner shares with captain Jack Eichel and how much he seems to like the organization and Buffalo, it seems highly unlikely the Sabres will deal him.

“I like it, I’m having fun,” Skinner said last week.

Trading Skinner would essentially wave a white flag on the season, which has slipped away from the Sabres following a terrific start. They began Friday’s games six points out of the Eastern Conference’s final playoff spot.

Skinner will probably command upwards of $8 million a season over a long-term contract. Only the Sabres can give him an eight-year deal.

What else do the Sabres have going for them?

Well, the grass likely wouldn’t be greener for Skinner somewhere else. In Buffalo, Eichel has essentially become his personal center. If he stays, they would almost certainly remain a tandem for years. Thirty or 40 goals could become a regular thing.

In Buffalo, Skinner is also close to his family in Ontario.

Naturally, the Sabres and Skinner have said little about a contract extension, although Botterill has acknowledged talks are ongoing.

“His group and ours have obviously continued our dialogue,” Botterill told reporters Wednesday in Tampa Bay. “We haven’t done play-by-play in the media just because that’s the way we wanted to go about things. Both sides continue to work to try and find a resolution.”

Skinner said: “There’s no point in really talking about it now, because there’s nothing really to talk about for me.”

The fan favorite usually says little about himself, preferring to let his play do the talking. The mix of skill and tenacity he showcases should help him become the Sabres’ first 40-goal scorer since Thomas Vanek in 2008-09.

Skinner has already exceeded expectations. Many figured he could hit at least the 30- or 35-goal mark playing beside Eichel. His numbers right now – he also has 18 assists – would’ve been considered a terrific full season.

Thanks to a background in figure skating, Skinner can contort his body and maintain his edges like few other players. He also constantly hounds the puck and pesters opponents.

In Thursday’s 2-1 shootout loss in Tampa Bay, Skinner had enough of Brayden Point hectoring, so he took the Lighting forward’s stick and threw it. Within seconds, Skinner and Point began scrapping.

Skinner needs just one more goal to tie his career high set in 2016-17. The Sabres haven’t had a 50-goal scorer since Alexander Mogilny scored 76 and Pat LaFontaine tallied 53 in 1992-93.

So far, Botterill hasn’t made a trade this season that brought a player back to Buffalo.

“But have we done it on a consistent basis? No, and that’s why our record’s at where it’s at.”