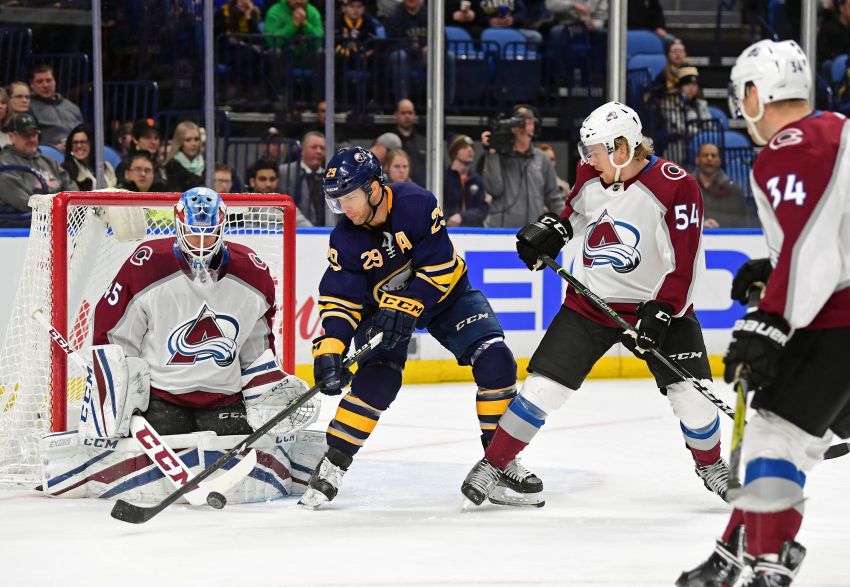 Jason Pominville has played 10 seasons with the Sabres. ©2019, Hickling Images

BUFFALO – All season long, Jason Pominville has insisted he hasn’t thought much about his future. But this morning, as he drove to KeyBank Center, the Sabres winger couldn’t help but wonder what it holds.

It dawned on him after 10 seasons with the Sabres, tonight’s game against the Ottawa Senators could be his final appearance here wearing Blue and Gold.

The thought of his Sabres career ending caused Pominville, 36, to break down.

“I’ve tried to soak in pretty much everything throughout my career,” Pominville said as he fought back tears. “Since I’ve been drafted – that was in ‘01 – all I’ve wanted to do is wear the sweater. I’ve been fortunate enough to do it for a while. But the drive in this morning, was, yeah, I definitely had to think about it, for sure.”

After that, an emotional Pominville asked to temporarily end the interview so he could compose himself.

Pominville has showcased terrific longevity. Only three players older than him have scored more than his 15 goals this season. He has spent much of the campaign skating beside top center Jack Eichel.

Of course, at times, he has also shown his age. Sabres coach Phil Housley has recently scratched him.

But the hapless Sabres, a team in need of an overhaul, might pass on re-signing Pominville, who will become an unrestricted free agent following the season.

If that happens, the Sabres will be saying goodbye to one of the greatest players in franchise history.

“He wears his heart on his sleeve, (gives) everything that he has every night, regardless of what ice time he’s getting,” Housley said. “He never complained. He wants to make a difference. He truly believes in this organization, the past and recent present.

Housley said winger Alexander Nylander suffered a lower-body cut in Tuesday’s 3-2 loss to the Nashville Predators and is out tonight.

One thought on “Sabres’ Jason Pominville breaks down discussing future”