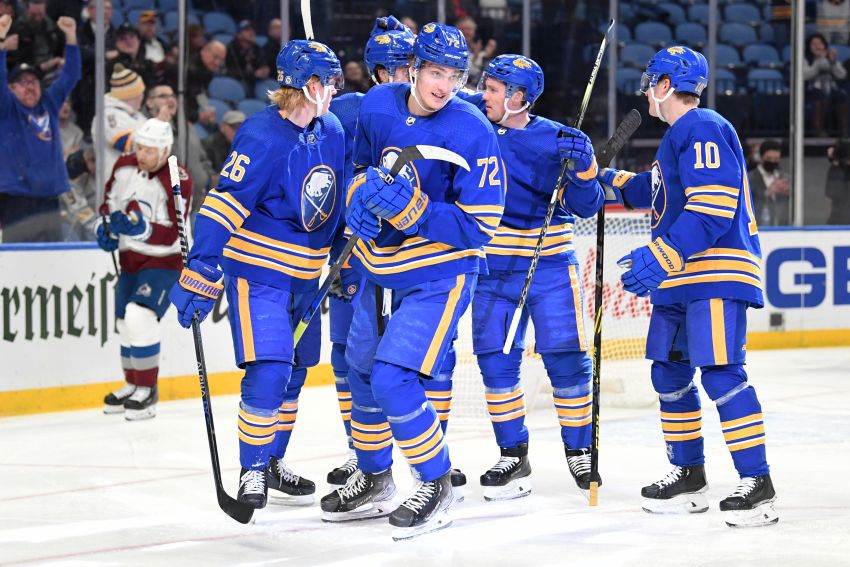 What might happen, say, if Thompson starts utilizing his quick release more frequently?

“When he realizes not to worry about scoring the perfect goal one inch under the bar, he’ll score double his goals,” Granato said after Thompson recorded his first NHL hat trick in Saturday afternoon’s 5-3 loss. “Just score, just shoot it quicker, just release it quicker rather than trying to score a perfect goal, and he’s starting to grasp that.

“And I said when he does, he’ll realize how much he loves to score and he won’t worry about the perfect goal, he’ll just keep scoring.”

Thompson’s dominant performance against the Colorado Avalanche – he scored his third goal 12:54 into the second period – illustrated he’s grasping what Granato and others have been stressing to him.

The American opened the scoring 2:50 into the game, quickly unleashing the puck from the inside of the left circle after linemate Jeff Skinner fed him a short pass.

There was nothing fancy about the goal. He simply took the feed let go a snap shot.

Thompson, 24, scored again at 12:52, tying the contest at 2 by connecting on another Skinner pass, this time high in the slot. He just grabbed the puck just let it fly again.

The final goal, Thompson’s 19th of the season, was perhaps his best. He snatched defenseman Mattias Samuelsson’s rebound in the slot between two Colorado defenders, turned and beat goalie Darcy Kuemper.

The 6-foot-7 Thompson, who has been pivoting Skinner and newcomer Alex Tuch, displayed no hesitancy.

Thompson, having compiled six goals and 12 points in his last 18 outings entering the game, had been building toward a dynamic performance like Saturday’s. He has become so dangerous he consistently generates scoring chances every game.

In the second period, he also fed Skinner a breakaway pass and set up a prime short-handed chance that Tuch rang off the post.

“Much like end results of games, it’s the same with individual success,” Thompson said. “You show up to the rink, try to get better every day and focus on each day, not taking it for granted and coming to work – and I think the results will follow.

“That’s just something that’s been a product of work and my teammates, obviously, are a big part of that, too. Playing with guys who are really good, really skilled players, you get looks like that and they start to go for you.”

They’ve mostly gone in at home for Thompson, who has scored 16 of his goals at KeyBank Center and has a team-high 27 points.

Thompson has no explanation for his success at home.

“It’s always nice to play at home and front of your own fans in your building,” Thompson said. “I don’t know if that has any correlation or whatnot.”

Fresh off Thursday’s disappointing 3-1 home loss to the Ottawa Senators, the Sabres responded against the Avalanche, taking the NHL’s points leader down to the wire.

“After last game, that’s not our standard,” Thompson said. “That’s not what we’re about and everyone in the room knows that. I think we showed up today with the right attitude, the right mindset and the focus going into the game. We played a full 60. That was the outcome. The effort was there, but the result (stinks).”

The game was tied at 3 in the third period when Jack Johnson interfered with Sabres defenseman Rasmus Dahlin when they pursued the puck behind the net. No penalty – Johnson committed two or three infractions – was called.

As Dahlin was injured on the ice, the play went back into the Buffalo zone, and Alex Newhook scored the go-ahead goal at 8:37.

The crowd of 10,526 spectators kept howling in disgust after the goal. Following the game, many of the remaining fans booed the referees Dean Morton, who officiated his 1,000th NHL game, and Dan O’Rourke as they left the ice.

“Those guys have been around a long time,” Granato said of the referees. “I think they’re good officials. So they had a conversation. Obviously, they see things happen fast. They saw what they saw. We can look at replays and they might see more, you do see more on that, obviously. But you got to move on.”

While the Sabres don’t want moral victories, center Casey Mittelstadt said Saturday’s effort proved they “can play with anyone and if we play with that compete.”

“We had them pushed back in the third there,” Mittelstadt said. “We were flying around and playing the way we want to play. Seeing that for us, as a group, I know it’s not the result we wanted, but it’s got to give us some belief that we know we’re there and we can play with anyone.”

Mittelstadt, 23, returned an upper-body injury Saturday that had sidelined him five games, skating 15 minutes, 10 seconds in just his eighth appearance this season.

He had an early scoring chance, one of three shots he pumped on net.

“It’s going to kind of take a little time to get up to speed,” Mittelstadt said. “I was happy we played them first. Throw me in the fire and have to catch up quickly. That was good for me. Yeah, I think I can still definitely play better, but it was a good start.”

Mittelstadt played between Rasmus Asplund and Kyle Okposo on the third line and also on the second power-play unit.

Mittelstadt said he can play again tonight in Columbus against the Blue Jackets.

After allowing three goals by the 13:02 mark Saturday, Sabres goalie Dustin Tokarski settled down, stopping 20 of the 21 shots he faced.

“He did battle back and it did take him a little bit,” Granato said. “It was almost as if, OK, the worst is over, let’s just get to (it). His body posture changed, he was much more aggressive and out toward shots, he could find pucks easier. And that’s what he struggled with initially.”

Granato acknowledged he might’ve pulled Tokarski if the Sabres did not start a five-game road trip tonight.

Tokarski and goalie Craig Anderson, having both just returned to the lineup, need recovery time and probably can’t handle back-to-backs. Anderson is expected to face the Blue Jackets.

“You give up three early and you start thinking, do we pull him?” Granato said. “I’m looking, we play tomorrow, which makes it a lot tougher to think about that. And we factor that in, and then you watch to see if he can get to his game.”

Each team presented Morton, 53, a signed jersey in a pregame ceremony.

Morton, a former pro defenseman, played one game for the Detroit Red Wings in 1989-90, scoring a goal.

The Sabres continued their defense rotation against the Avalanche, scratching Robert Hagg and inserting Mattias Samuelsson.