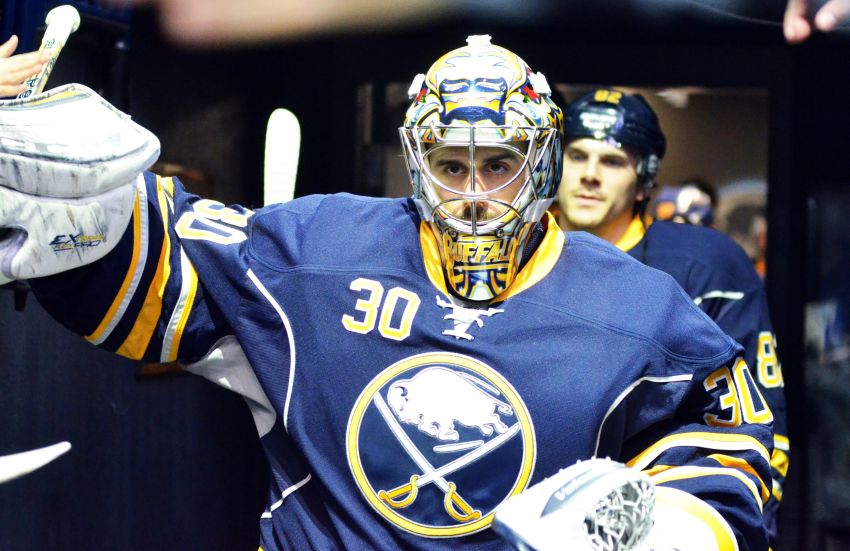 BUFFALO – Ryan Miller knows most NHL cities can’t offer what this one has for 11 seasons. The Sabres goalie hasn’t just played for a team; he’s felt a part of something special in the community.

But right now isn’t the time to reflect, Miller said Thursday. He’s still with the Sabres. The former Vezina Trophy winner wants to focus on his 533rd start tonight against the San Jose Sharks.

Still, with the NHL trade deadline hitting Wednesday, Miller knows it could be his last game here. General manager Tim Murray has said the rebuilding Sabres are searching for a good place to deal their franchise netminder, an unrestricted free agent following the season.

So Miller, who’s usually thoughtful, couldn’t help himself. He got a little nostalgic Thursday during a nearly 10-minute chat with the media.

The 33-year-old didn’t want to miss an opportunity to thank everyone in Buffalo “who’s been a friend, been a supporter, been a fan.”

He talked about someone trying to teach him how to hold his hockey stick at Wegmans, fans concerned he should eat more and the “sweet old ladies” that would run up, hug him and “scare me half to death coming from the side.”

“Real nice to have a sweet old lady give you a hug and say she likes to watch you play,” Miller said.

Tonight promises to be one of the most emotional games inside the First Niagara Center in recent memory.

Miller knows an honest effort in this town earns “positive feedback from everyone.”

“That’s more than you can ask for,” he said. “There are cities out there when you’re invisible, you don’t have that same support. …

“I feel like I’m fortunate. I met some great people, some great fans. But again, we’ll see how everything plays out. I’m not going to close off any avenues.”

Based on comments from Blues general manager Doug Armstrong to the St. Louis Post-Dispatch, Miller likely won’t be headed to a team many believe covet him. Armstrong, whose Blues are built to win the Stanley Cup now, appears content to stick with goalie Jaroslav Halak.

“St. Louis has historically been a graveyard for goaltenders,” Armstrong told the paper. “I’m not being critical of the fans, but it doesn’t seem like they’re with who’s in net. Jaro doesn’t deserve to have the past put on him.”

Injuries have limited Halak to only two playoff starts with St. Louis.

“He hasn’t failed,” Armstrong said. “He’s going to have the opportunity to show what he’s capable of. That’s how it is in sports. Until you win, you can’t win.”

Miller, of course, isn’t the only high-profile Sabre who could be playing his last game tonight. Captain Steve Ott and winger Matt Moulson are also unrestricted free agents.

Ott’s usually open and talkative with the media. But he’s “completely done” talking about his future for now.

“I can only control what I can control,” he said politely. “I have a bunch of teammates here. I don’t want any distractions here on myself, personally, or anything else. I’ve given all the answers I can possibly give.”

“So all these guys maybe have excuses or reasons to say, ‘Hey, it’s a matter of time before we leave.’ No, they’re not doing that. They’re paying attention to what they have to do right now.”

Ville Leino subbed for Ennis between Moulson and Drew Stafford in the 5-4 overtime win against Boston, the Sabres’ second straight triumph.