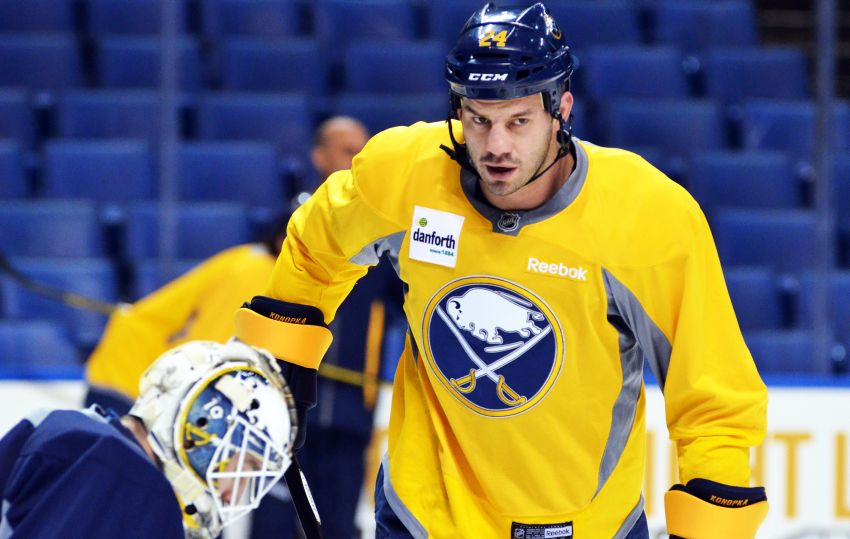 BUFFALO – In Minnesota’s fifth game of the season Oct. 12, Sabres center Zenon Konopka broke his left pinky finger. Still, he wouldn’t leave the lineup. He even fought six times with the injury.

Finally, Konopka, a waiver pickup from the Wild last month, underwent surgery during the Olympic break.

“It was bugging me quite a bit,” Konopka, who will return tonight against the Boston Bruins, said this morning inside the First Niagara Center. “So over the break we had an opportunity to get in there and clean up the bone. I think it was one of those things it bothered me so much before the break that it’s not perfect right now but it’s better than it was. The doctors are optimistic it should be 100 percent sooner than later.”

Update: The Sabres have announced Zenon Konopka as a scratch tonight.

Konopka sat Tuesday’s 3-2 win against Carolina as a precaution. The 33-year-old said the finger “hampered me in certain situations.”

“I caught a couple right hands over the course of the year because of misgripping,” he said. “All it could do is help.”

The Sabres aren’t entirely healthy, however. Center Tyler Ennis, who has three goals and seven points in the last seven games, fell into the boards Tuesday and has “general body soreness,” interim Sabres coach Ted Nolan said. Ennis is day-to-day.