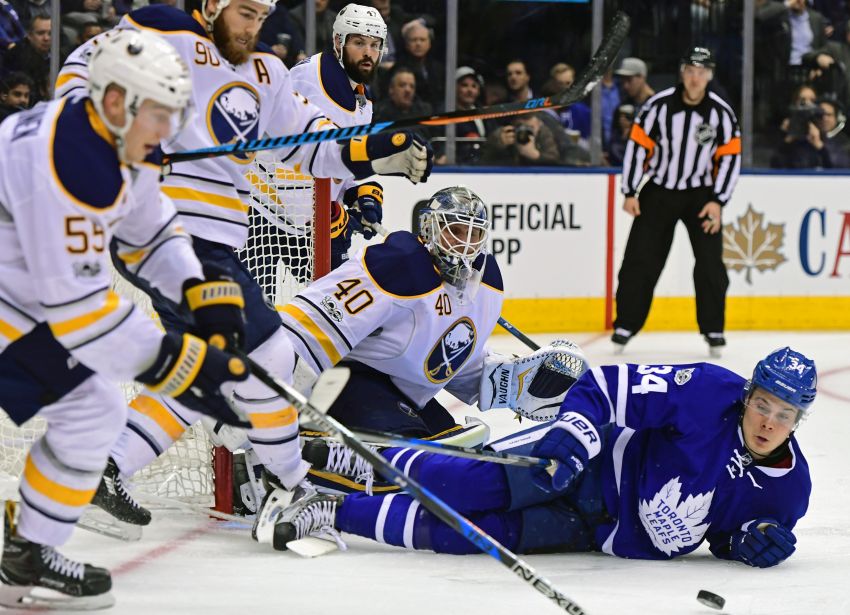 TORONTO – Buffalo Sabres goalie Robin Lehner was livid, looking for someone or something to take his anger out on following a wretched 10-minute stretch.

So after getting yanked from Tuesday’s 4-3 loss to the Toronto Maple Leafs, the Swede yelled at his own bench as he skated off the ice. Lehner then slammed his mask to the ground, looked down the bench and threw his glove off.

The Sabres have a lot of demoralizing losses this trying season. Tuesday’s might rank at the top of the list.

Up 2-0 after 20 minutes thanks to one of their best road periods all season, the Sabres imploded in the second, allowing three goals in 9:13.

Lehner, the No. 1 netminder the Sabres dished a first-round pick for in 2015, couldn’t come up with a huge save to help his reeling team.

“It’s more just the timeliness of the goals,” Bylsma replied when asked if he needed a big stop from Lehner.

Toronto’s Leo Komarov deflected a puck in at the crease 32 seconds into the period. Then Matt Martin tied it at 8:32, beating Lehner under his right arm after putting a seemingly harmless shot on net from the left corner.

“I feel like I had my post pretty good,” Lehner said quietly inside the Air Canada Centre dressing room. “It hit a pretty good spot where it sneaks through. It’s frustrating. I want that back. I’m a goaltender. That’s part of my life.

“Mistakes happen, don’t let them affect me. It’s what I’m getting better and better at. It’s still frustrating.”

Rookie star Auston Matthews put the Leafs up at 9:45, whistling a shot in high from the edge of the slot, his 22nd goal.

How badly have the Sabres performed in the second period this season? Opponents have outscored them a whopping 47-33.

Matthews’ goal ended Lehner’s night after only 13 saves. The Swede hadn’t been yanked because of performance all season.

“Sometimes you make mistakes,” Lehner said. “I think I’ve been pretty good this year of letting it go and keep going. … I didn’t want to get out, but it’s the coach’s decision.”

Bylsma, who said Lehner wasn’t yelling at him, had no problem with the emotional outburst.

“He should be upset with getting pulled,” Bylsma said. “That’s a part of Robin’s game, that emotion.”

Backup goalie Anders Nilsson made 15 saves in Lehner’s place. James van Riemsdyk beat him on the power play beside the net 13:04 into the third period, sealing the game.

Fresh off a complete 4-1 home win Monday afternoon against Dallas, the Sabres started strongly again before the 19,122 fans.

Kyle Okposo, the Sabres’ lone NHL All-Star, opened the scoring at 10:16, capitalizing when Leafs goalie Frederik Andersen played the puck to him in the right circle. Okposo then gloved the gift and scored.

“He had played it up the middle a couple times before, so I was just trying to read that,” Okposo said.

“It wasn’t expected from our standpoint, just more precautionary with him coming back from his injury and not playing back-to-back games,” Bylsma said.

The home team has won 23 of the last 27 meetings between the clubs.

i'm incorrect and also dumb. he is yelling at SOMEONE, let's just say that. pic.twitter.com/WlDx0n9kXD

Lehner is kinda mad he got pulled I guess pic.twitter.com/hOWCW14lcP