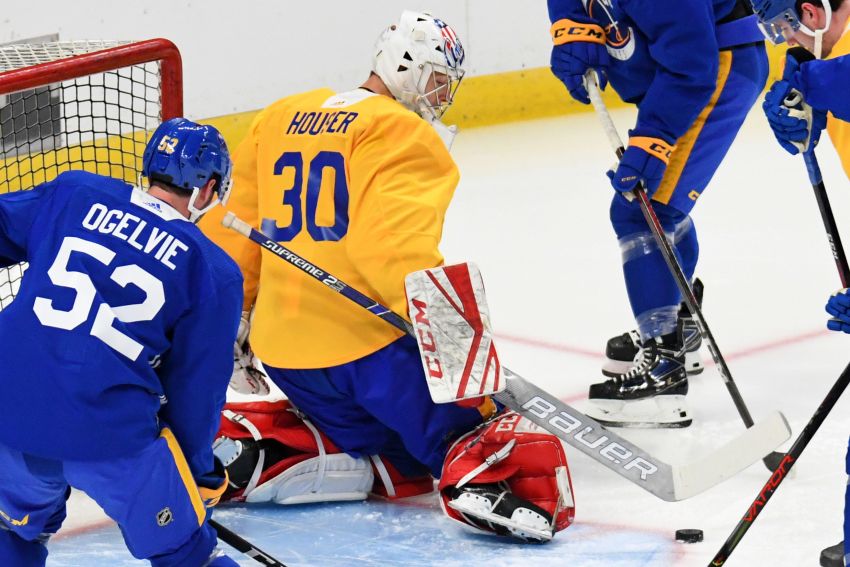 BUFFALO – Sabres goalie Michael Houser toiled nine years in the minors, playing 283 games, most of them in the ECHL, for seven teams before an opportunity to start an NHL game materialized.

Tonight against the New York Islanders at KeyBank Center, Houser, 28, will make his NHL debut, interim coach Don Granato said. Houser will be the sixth Sabres goalie to start a game this season.

Houser has spent most of the past seven weeks on the taxi squad and dressed as a backup five times.

Incredibly, he hasn’t played a game at any level this season. His last appearance came March 7, 2020 with the Cincinnati Cyclones, the Sabres’ ECHL affiliate.

“It’s been a while since I played, so I’m just going to try to get into the game as quick as possible and get a couple touches,” Houser said on a Zoom call this morning. “It’s exciting. I’ve waited for this for a long time and worked extremely hard for it. It’s an exciting opportunity for myself.”

Houser said assistant coach Mike Bales, who’s in charge of the goalies, told him when he arrived at the rink this morning he would be starting tonight.

The Sabres gave goalie Dustin Tokarski, who replace an injured Ukko-Pekka Luukkonen in Saturday afternoon’s 6-2 loss to the Boston Bruins, the morning off.

So Houser, who signed his first NHL contract in six years on March 19, will go tonight.

“It’s a little nerves right now but I think after the puck drops, settle in, hopefully get a quick touch and then it is just another hockey game,” said Houser, who began this season with the Rochester Americans. “I’m going to have to tell myself I played a million of these before, just different players on the ice. But it’s exciting. There’s nothing to back down from. I’ve been waiting for this for a long time so just ready to get going tonight.”

Houser said he “always viewed myself as a hockey player” and simply kept plowing ahead.

“That’s always been my job ever since I turned pro when I was 20, I’ve just been working for this moment,” he said. “The work never changes based on where you’re playing, whether it’s Cincinnati, Rochester or Buffalo. It’s always the same work, I practice the same way and just have different players playing against me and in front of me.

“So I think the exciting thing too is I’ve never played a game with all NHLers, all NHL defensemen in front of me. So being able to play with them tonight, go back and play the puck and watch them break it out, it’s going to be fun.”

Granato said those familiar with Houser’s path “have been really excited for him because he is such a dedicated athlete and a good teammate, good person.”

“Everybody that knows him is excited for this opportunity for him as I am, based on all that and what I see from him too,” he said. “He’s been great. It’s not an easy spot for any of the taxi guys to grind through this every day. It becomes monotonous for them because they’re not in the lineup and he’s been outstanding through that.”

Granato did not have an update on Luukkonen, who was being examined this morning.