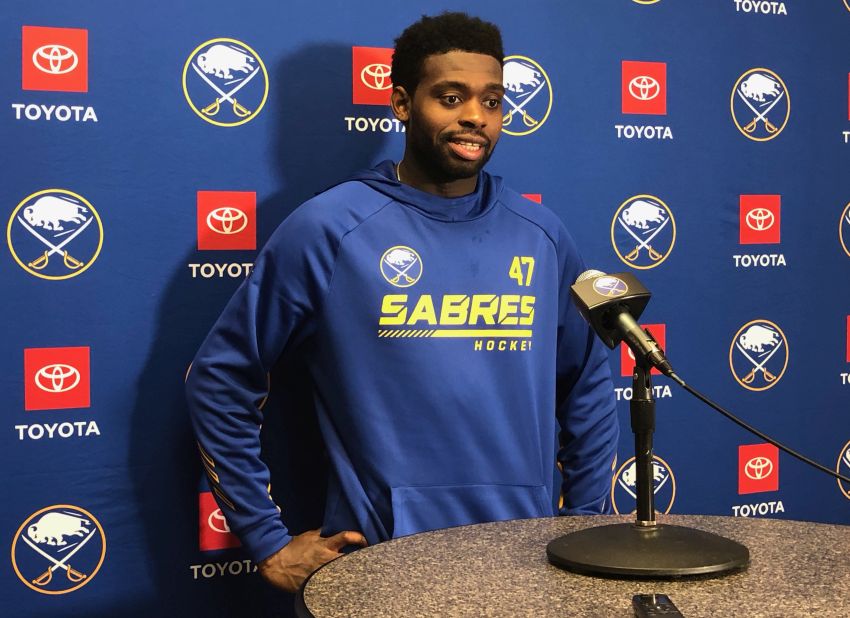 PITTSBURGH – When Sabres goalie Malcolm Subban skated to the bench Friday after making perhaps the most brilliant save in the NHL this season, backup Ukko-Pekka Luukkonen asked him if he stopped the puck with his glove.

Subban, 27, had no idea his penchant for swinging his left arm behind his back, something he called a “bad habit,” resulted in a dynamic stop.

“Honestly, I didn’t even know it happened,” Subban said of his behind-the-back glove save on Evan Rodrigues late in the first period. “I thought someone hit my glove or something. I didn’t know it was the puck. I had no idea.”

With the Sabres short-handed, Subban stopped Jeff Carter’s quick redirect from the left circle. Rodrigues, who was stationed on the goal line to Subban’s right, pounced on the rebound and appeared ready to bury an easy goal.

But as Subban lunged to the right, his left arm swung behind his back and the puck hit his glove as it was about to enter the net.

“I don’t even think he meant to kind of save that,” Rodrigues said following the Penguins’ 3-2 overtime win inside PPG Paints Arena.

Officials reviewed the play, but there was no conclusive evidence the puck crossed the goal line. The Rodrigues stop was one 20 first-period saves Subban made.

“I saw the replay and it was a pretty lucky save,” Subban said after his 45 save-performance.

“He’s an incredible athlete, which we knew, and there you saw it,” Granato said.

Sabres defenseman Casey Fitzgerald, who made his NHL debut Friday, has followed Subban’s career and said the save did not shock him.

“I’ve been watching him for a while and he makes saves like that all the time,” Fitzgerald said. “He’s an incredible goaltender. He had a few more like that, game-saving saves, and he really kept us in there.”

The Sabres returned to Buffalo following the game and had Saturday off.

Save of the year? pic.twitter.com/U3O1Hn1Vud