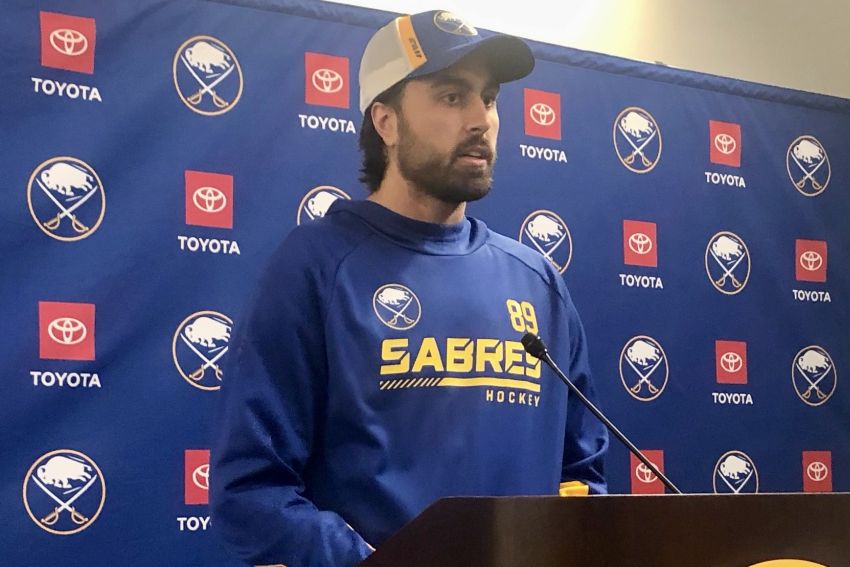 That road is about to end. Coach Don Granato said today that Tuch will play his first game with the Sabres, the team he adored growing up in Baldwinsville, on Monday against the Columbus Blue Jackets.

“He’s as excited as anybody I’ve seen to play a game, because it’s here, because he’s putting that jersey on,” Granato said. “Anybody that’s grown up in the game of hockey that loves it like we all do, because we’re in the business, when you see that you feel that and that’s a pretty awesome feeling.”

Tuch, 25, has experienced a lot since having surgery July 21. He changed teams, moving from the Vegas Golden Knights to his beloved Sabres in the Nov. 4 blockbuster Jack Eichel trade. After arriving in Buffalo, he couldn’t practice until Nov. 29.

“Coming to a new team, trying to mesh with your teammates but you’re not able to go in and battle, has been difficult,” Tuch said. “At the same time, I think it’s made it really easy on me coming into a new city. They’ve been very welcoming. I’ve had some ups and downs, like any other rehab process, but I like where I’m at right now and I’m excited to get going here.”

Check back later for more on Tuch, who practiced at right wing beside center Dylan Cozens and Brett Murray.

In other news, Granato said center Tage Thompson missed today’s practice because of soreness. Thompson, 24, has scored a team-leading 10 goals this season.

“He’ll get looked at today to make sure we’re not in a situation where the soreness could be more or it could be something we could make worse by having him go play,” Granato said. “So a little bit of concern for let’s find out if there’s anything more than kind of meets the eye.”

Granato added: “Not ruling him out for tomorrow but also not saying that he’s in tomorrow.”

Following the session, goalie Craig Anderson, out since suffering an upper-body injury Nov. 2, took some shots on his own.