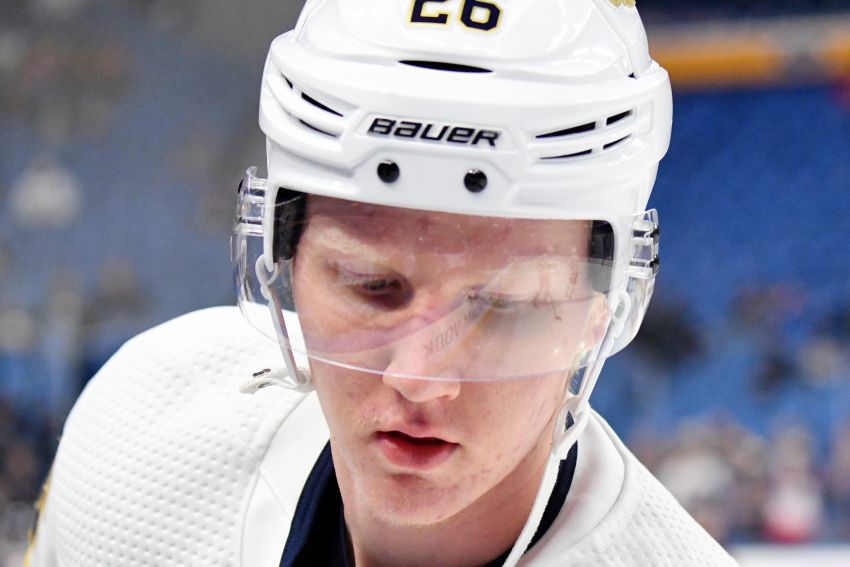 BUFFALO – When Rasmus Dahlin suffered a concussion in November, the injury created an opportunity for the Sabres defenseman.

“You can really calmly go through video and reflect and discuss,” Krueger said following Monday’s practice inside KeyBank Center.

As he recovered, the Swede watched his teammates from the press box, studying the action on the ice.

“I had never done that before in the NHL, so I learned a lot,” Dahlin said after the Sabres prepared for tonight’s road game against the Ottawa Senators. “I just refocused and found out some stuff I can improve on. So far, it worked out.”

Dahlin struggled defensively early in his second NHL season, often lacking composure. But since returning Dec. 12, he has consistently displayed his elite playmaking abilities while playing a calmer, sturdier style.

“We don’t feel he changed as much as that he evolved,” Krueger said.

He added: “It was just an evolution with him being able to take a breath, gather some energy and come out with a fresh mind after the injury.”

Right now, Dahlin has a four-game point streak and has compiled two goals and 14 points in his last 15 outings.

Dahlin’s splits before and after his concussion don’t illustrate a huge change. In his first 24 games, he registered one goal, 16 points and a plus-2 rating. In 25 contests since returning, he has compiled three goals, 19 points and a minus-1 rating.

But Dahlin has clearly morphed into stronger two-way presence over the past two months.

He added: “Defensively, he’s really become comfortable up against anybody, and he’s finding his way in our principles, which we’re really excited about.”

Krueger said earlier this season Dahlin would try to force plays “in some of the hotter situations.”

“There’s a different rhythm all the time. He’s finding that rhythm now, which the great defensemen do. (They find) that mix between simplicity when the team needs it and brilliance when we need it.”

“He’s more comfortable,” Okposo said of the last two months. “I thought he had such a good rookie season that at times it’s difficult when you don’t have that same emotion that you had in that first year, you’re just so pumped up. You see so many guys go through a little bit of a sophomore slump.”

Despite missing 10 games – an upper-body injury recently sidelined him two contests – at his current pace, Dahlin would score 51 points over a full season.

A Sabres defenseman hasn’t cracked the 50-point mark since Garry Galley recorded 54 in 1995-96.

“Offensively, I mean, he’s absolutely elite and will only continue to astound us in puck management and the ability to make plays and see the ice,” Krueger said of Dahlin. “So it’s a lot of fun to be on the coaching side of that skill.”

Dahlin’s assist on center Johan Larsson’s goal Sunday was his 79th NHL point, tying him with Hall of Famer Ray Bourque for the second-most points recorded by an NHL defenseman before his 20th birthday.