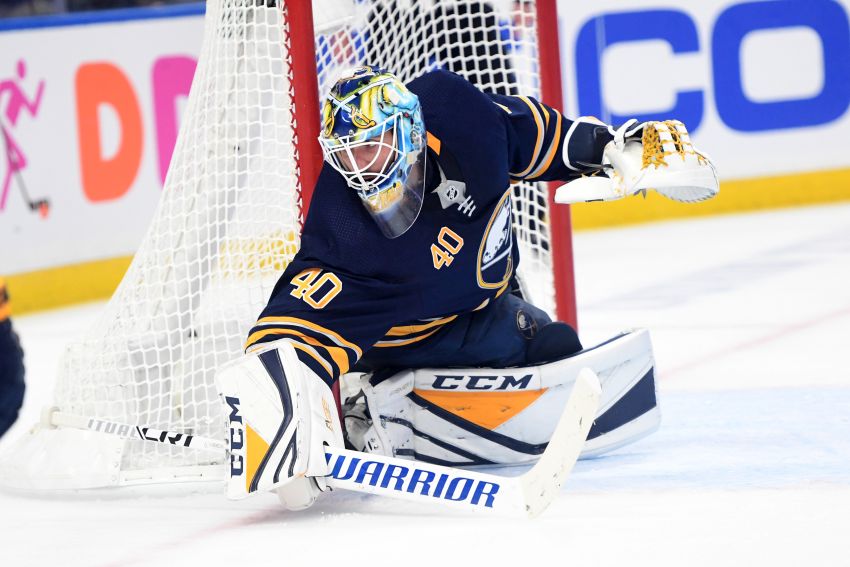 BUFFALO – Over their three-game winning streak, winger Kyle Okposo believes the Sabres have played just a period and a half of “real good” hockey.

“We’ve got some stuff to clean up,” Okposo said after scoring in Tuesday’s 2-1 victory over the Atlantic Division-leading Tampa Bay Lightning. “Obviously, we’re getting two points and good teams find a way to win.”

Yes, believe it or not, the Sabres are finally a good team again. They improved to 10-6-2, stymieing a potent Lightning team that had scored four or more goals in five straight outings.

Just a year ago, when the Sabres finished dead last, a three-game winning would’ve been celebrated. This season, however, “our standard’s higher,” Okposo said.

So while Okposo said he takes solace in the Sabres’ ability to triumph when they’re not at their best, he knows they must improve.

Sabres winger Jeff Skinner said: “This league’s so tough to win in, I think the margin for error’s so small that some nights you’re going to have to sort of grind one out maybe you don’t deserve to win.”

The Sabres emerged victorious because goalie Carter Hutton performed splendidly all night, making 29 saves. In the waning minutes, he made a few big stops as the Lightning pressed for the tying goal.

Then in the final seconds, Lightning superstar Steven Stamkos faked a shot and fed Nikita Kucherov in the right circle.

“It was a mayhem,” Hutton said. “Stamkos made a heck of a play their just to fake a shot and then walk to the middle and get it across to Kucherov. Those guys can shoot it, so I just battled.”

Kucherov fired as Hutton recovered from the fake and moved across the crease. Hutton appeared to make a game-saving stop with one second left, although he said in the dressing room minutes later the puck hit the outside of the post.

“We did everything but score goals,” Kucherov said of the game.”

Hutton believes he had positioned himself to stop the shot if it landed on net. Then a sense of excitement, not relief, accompanied the final horn.

Sabres coach Phil Housley said of Hutton: “He’s been locked in pretty much all year for us.”

To Hutton, the final seconds felt “like scoring a goal for me.”

“You get to show what you’re made of and it was fun,” Hutton said. “I think all the guys blocking shots, battling – it was a free-for-all.”

Skinner scored again 17:45 into the game, giving him 13 goals in 18 contests and sole possession of second place in NHL scoring.

Maintaining that torrid pace is asking a lot. Still, he hasn’t shown any signs of letting up. Over a full season, his early production equals a 59-goal clip.

Okposo made it 2-0 5:43 into the second period. Tampa Bay’s Anthony Cirelli answered 15 seconds later on a breakaway.

Then the Sabres gutted out a win before the crowd of 15,833 inside KeyBank Center.

How much have the Sabres improved? They won their 10th game last season on Dec. 29, their 38th contest.