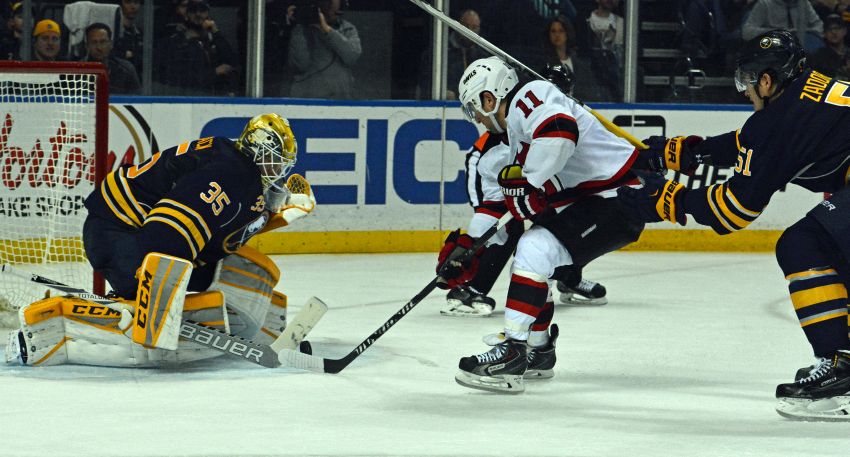 BUFFALO – In Europe, handling the puck is “not a big thing for the goalies,” Sabres newcomer Anders Lindback said.

The bigger rink allows them to sling it and almost act as a third defenseman. European ice surfaces don’t have those pesky trapezoids designed to keep goalies in their net, either.

Handling the puck on the smaller North American ice surface with restrictions is difficult for NHL goalies. Very few do it well.

The 6-foot-6 Lindback is one of the best.

The Swede has been moving out of the net and passing the puck all over in his eight appearances with the Sabres, stretching the ice and helping his defense.

“I keep saying that it’s unreal,” defenseman Nikita Zadorov said Friday prior to the Sabres’ 3-1 loss to the New Jersey Devils inside the First Niagara Center. “I’ve never seen the goalie handle the puck like a real player, and I think it’s easy for us. We have less pressure, less bobbling the puck off the boards.”

Lindback’s ability to move the puck means his defensemen chase it and carry it less.

“It’s nice to be able to go back, just kind of fan off to the corners and know he’s going to make a play with it,” Sabres defenseman Mike Weber said. “That’s a big help, because he kind of draws some players away from us. So it gives us a little extra time to make a breakout.”

Naturally, players had to adjust to Lindback’s style.

“We’ve had goalies that are more come out, stop it, leave it for us,” Weber said.

In fact, the Sabres haven’t had a goalie with Lindback’s supreme puck-moving ability since Darcy Wakaluk in the early 1990s or Tom Barrasso in the late 1980s.

“You had to change the game plan to keep the puck away from him because he was so good with the puck,” Nolan said. “Lindback, I don’t know if he’s that good, but he handles the puck extremely well and … our defensemen, now they don’t have to go back and peel off. If the forwards take away the defense, he can slip the puck up the middle. So he’s very, very effective.”

“I’m not going to in any shape or form take it away from his game, because teammates love it,” he said. “It takes a lot of pressure away from defensemen, disrupts opposing team’s forecheck. Eventually, they are not really willing to dump in the pucks and give it away to Lindy, which makes them think twice what to do in certain game situations, and that buys us more time. So it’s a tremendous asset.”

On an anemic team about to break its own dubious record for fewest goals scored in modern NHL history, slick Sabres winger Tyler Ennis had 18 goals entering Friday.

“Somebody asked me who’s the most consistent player on this team and who’s the most valuable player on the team this year? Tyler Ennis by far,” Nolan said. “His vision, his dynamic, his intuition with the puck. He darts in and out. He’s competitive.

“Scoring 18 goals now – no knock against the centermen they had – but you give him a legitimate, experienced center iceman to feed him some pucks, the sky is the limit for this kid. You look at 18, you can look at 38, 40. The sky’s the limit, I really believe.”

“I think it changed it drastically,” Nolan said about moving Ennis. “Tyler’s a dynamic player in this league. When he’s on top of his game, he’s pretty effective. So back there we have a legitimate quarterback.”