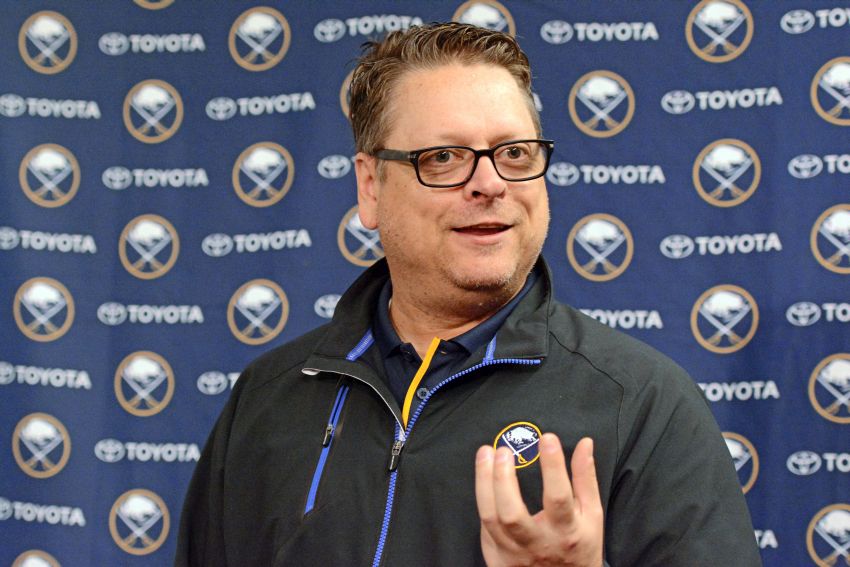 BUFFALO – If general manager Tim Murray gets his way, the Sabres will pry a young backup from another team soon to help fill their goaltending void.

“I’m confident that we can find something that can work here just by talking to other teams,” Murray said this morning inside the First Niagara Center. “There are people available. That’s the avenue we’re pursuing right now.”

The Sabres only have one NHL goalie, Chad Johnson, a career backup, under contract for next season, so goaltending is probably their biggest priority this offseason.

So far, Murray has spoken to five teams. Free agency could also be an option.

“So you’re working it every day and you’re trying to figure out, first of all, the goalies that are available via trade, what the price is, can you afford that price, and if at the end of the day you can’t, then you have to move on to plan B.”

The New York Rangers are reportedly shopping Cam Talbot, who subbed superbly while Henrik Lundqvist was injured last season. Several teams are interested in the 27-year-old Talbot, including the Sabres, according to TSN’s Darren Dreger.

The Sabres traded goalies Jhonas Enroth and Michal Neuvirth prior to the March 2 trade deadline. Anders Lindback, who came back in the Enroth deal with Dallas, played most of the games down the stretch. All three are unrestricted free agents.

Johnson suffered a season-ending ankle injury hours before he was to make his Sabres debut.

Since goalie prospect Linus Ullmark, who will likely start the season in Rochester when he’s healthy, is recovering from hip surgery, Murray would also like to add another goalie.

Murray said he has discussed an AHL contract with goalie Nathan Lieuwen’s agent. Lieuwen, who has a history of concussions, morphed into a strong prospect in 2013-14, playing seven games with the Sabres before suffering another concussion.

Vision problems possibly related to the concussion – Lieuwen had a 3.29 goals-against average and .883 save percentage in Rochester – forced the 23-year-old to end his season in January.

“He was having major vision problems and they attributed that to multiple concussions, and we don’t know if that’s the case or not,” Murray said.

Murray said Lieuwen is symptom-free and “going in right direction.”