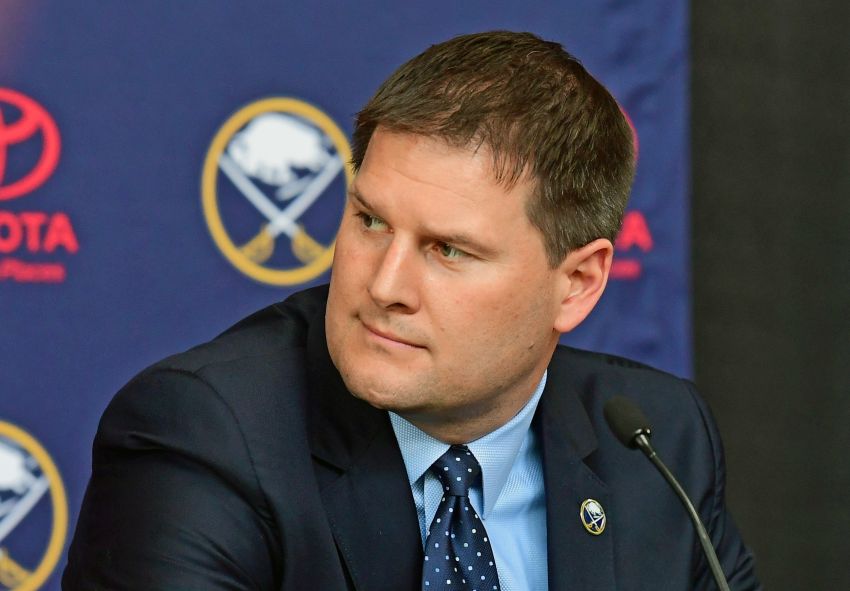 Jason Botterill has only been on the job since last month. ©2017, Hickling Images, Olean Times Herald

CHICAGO – We don’t have a book on Buffalo Sabres general manager Jason Botterill yet. We don’t know his tendencies, what kind of team he truly wants to build or which players he values over others.

Botterill, widely regarded as one of the NHL’s brightest young minds, has been on the job 43 days. So far, the 41-year-old has made only minor deals, acquiring defenseman Nathan Beaulieu and reaching an agreement with the expansion Vegas Golden Knights so the Sabres could keep goalie Linus Ullmark.

Does Botterill want to revamp the Sabres? Or does he just want to tweak? How aggressive could he be? This weekend’s NHL Draft, which kicks off with the first round tonight at the United Center, should provide the first clues.

Besides drafting prospects – the Sabres have six picks, including the eighth overall selection – Botterill might be busy making deals. Some notable trades went down Thursday, and more will almost certainly materialize over the weekend.

The Sabres must find a puck-moving defenseman if they want to make a serious run at their first playoff spot since 2011. A steep price accompanies those slick talents, meaning a top forward – Evander Kane or Sam Reinhart, for example – would likely have to be dealt.

It’s important to remember Botterill has no attachment to the current group of Sabres. Former GM Tim Murray acquired almost everyone on the roster. Anyone, other than maybe centers Jack Eichel and Ryan O’Reilly and defenseman Rasmus Ristolainen, could be in play.

Kane, even with one year left on his contract, should bring a notable return. The 25-year-old is coming off a 28-goal season in which he morphed into an elite scorer over a three-month stretch. He also stayed out of trouble off the ice following some incidents in 2015-16.

Murray dished five assets to the Winnipeg Jets to acquire Kane and defenseman Zach Bogosian in 2015. Naturally, Murray, because he was so tied to Kane, was open to extending the speedy winger after July 1. But Botterill might see Kane’s talents and expiring contract differently.

Reinhart, meanwhile, is coming off a decent 17-goal, 49-point season.

Still, Reinhart, a natural center, has mostly thrived as a winger. Murray drafted Reinhart second overall with the intention of him staying in the middle. With Eichel and O’Reilly entrenched at center, Reinhart’s likely not moving from the wing. Perhaps a team values the 21-year-old as a center and would be willing to pay a steep price.

Of course, the Sabres, as evidenced by the 199 goals they scored last season, need scoring. So what else could Botterill offer if he wants to wheel and deal?

Botterill doesn’t possess the assets Murray did when he swung blockbusters to acquire Kane and O’Reilly two years ago. Murray had stockpiled picks as the Sabres tanked. He also had players leftover from the Darcy Regier era.

Botterill said last week he’s open to anything with the Sabres’ first selection – moving up, down or even trading it. The chances of him dishing it for an established player seem slim, however.

These days, teams rarely trade high picks. Even in what’s considered an average draft, the Sabres can find a terrific prospect early, perhaps a young defenseman like Timothy Liljegren or Juuso Valimaki.

It’s possible the other top defensemen – Cale Makar and Miro Heiskanen – won’t last until Buffalo’s pick, so perhaps Botterill would try to move up.

But it has only been assumed Botterill covets a defenseman eighth overall. He said last week since most prospects take years to develop, he wants to take the best player available.

Whether it’s this weekend or in the coming weeks, Botterill will begin putting his stamp on the Sabres. Those who know him best say they knew years ago, back when he was attending Michigan or a young pro, he would do great things in hockey. Winning three Stanley Cups with the Pittsburgh Penguins probably only strengthened their belief. But he won those as an assistant and associate GM.

Now, Botterill’s the guy in charge.