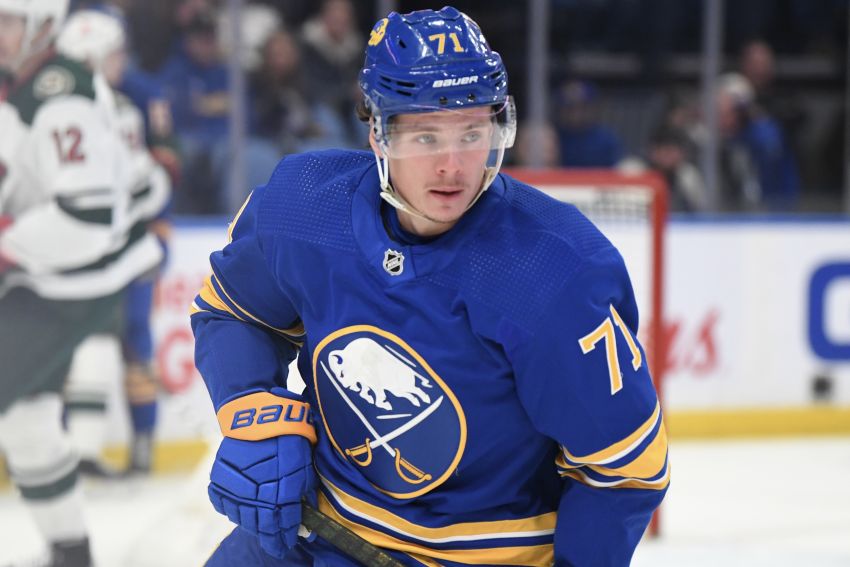 Victor Olofsson ended the season on a tear. ©2022, Micheline Veluvolu

MONTREAL – General manager Kevyn Adams said on Wednesday the Buffalo Sabres have been working on a new contract with winger Victor Olofsson, the team’s most prominent restricted free agent.

“We’re in a good spot here,” Adams said inside the Fairmont Queen Elizabeth Hotel, the team’s headquarters ahead of the NHL Draft. “Mark Jakubowski, who does a lot of our lead in the negotiating side, has had some good conversations as of late with Claude Lemieux (his agent). So hopefully here soon. It’s definitely on the top of our list, though.”

The Swede finished on a tear, compiling 15 goals and 28 points over his final 34 contests. He also enjoyed a hot start, scoring five goals and nine points in the first seven games.

If Olofsson hadn’t suffered a wrist injury in early November, he might’ve joined Tage Thompson and Jeff Skinner, his linemates late in the season, in the Sabres’ 30-goal club.

Olofsson, of course, will likely earn a substantial raise. He just completed a two-year, $6.1 million contract. He has scored 20 goals twice in his three NHL seasons.

Bryson, 24, established himself as a versatile presence on Buffalo’s blue line last season, compiling one goal and 10 points in 73 games.

“We’re getting down the road there,” Adams said of a new deal for Bryson. “We made it clear to him from the beginning that we think, the way he played last year, he can play both sides. I think he’s got a unique skill set that helps us.”

Biro, 24, played his first NHL game last season. He scored 12 goals and 41 points in 48 games for the Rochester Americans.

Forwards Brett Murray and Arttu Ruotsalainen and goalie Ukko-Pekka Luukkonen are the Sabres’ other restricted free agents. Only Luukkonen doesn’t have arbitration rights.

Adams said the Sabres plan to meet today with the representatives for defense prospect Ryan Johnson.

Johnson, the 31st overall pick in 2019, has played three seasons at Minnesota. Adams said in May the youngster was “leaning toward” returning for his senior year.

“For me, it’s about honesty and clarity and we’ll have that conversation,” Adams said. “But … we like him, we think he’s a good prospect.”

Johnson, 20, was selected by former GM Jason Botterill. He can become a free agent next year if the Sabres don’t sign him.