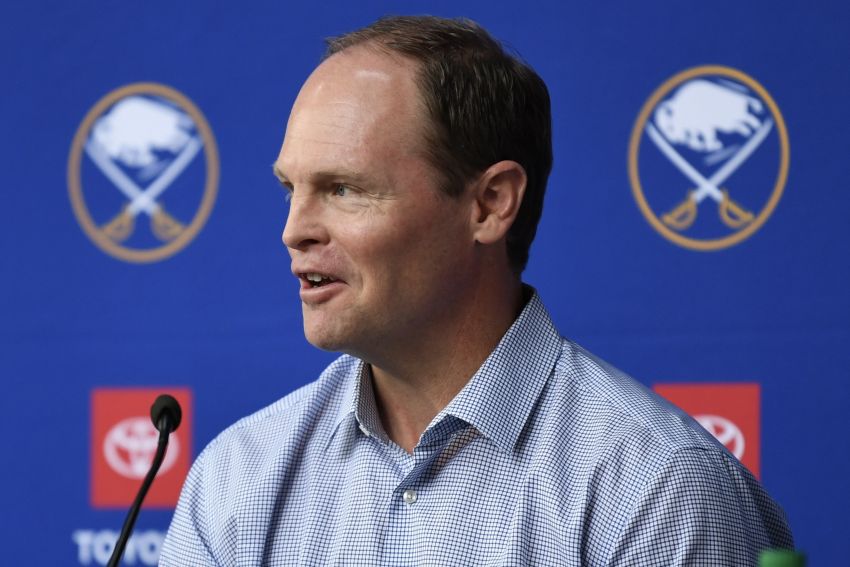 Kevyn Adams could have a career-defining night. ©2022, Micheline Veluvolu

MONTREAL – General manager Kevyn Adams’ vision for the Buffalo Sabres has started coming together much faster than most observers expected.

It was barely a year ago that Adams, fresh off the Sabres’ dead-last finish, began tackling a daunting rebuild. In his first months on the job in 2020, he had tried to push an older team into the playoffs by acquiring a few notable veterans.

After that team failed spectacularly, Adams implemented his blue print – essentially build through the draft and develop talent – for the Sabres.

Adams has a plan for his hometown team, and he refuses to be swayed from it or take any shortcuts.

Fast forward to today and the Sabres, who finished last season on a 16-9-3 run, have three picks tonight during the first round of the NHL Draft at the Bell Centre.

It could be a career-defining night for Adams, who along with coach Don Granato, has quickly transformed the Sabres from a laughingstock into one of the NHL’s upstart young teams.

If the Sabres, who select ninth, 16th (from Vegas in the Jack Eichel trade) and 28th (from Florida in the Sam Reinhart deal), hit on some picks, they might end up with more core talent.

Or perhaps Adams could package some of the Sabres’ selections – they have 11 total – to acquire an established player to fill one of their needs. They must add another goalie and also might be interested in finding an experienced defenseman.

“We feel really good about those picks and that we’re going to add really good prospects into our pipeline and move ourselves forward as an organization,” Adams said Wednesday inside the Fairmont Queen Elizabeth Hotel, the team’s headquarters ahead of the draft. “Now, what it also does, when you have three first-round picks, is you become popular and you have conversations and you’re in conversations and nothing’s off the table.”

But don’t expect Adams to try to accelerate the rebuild and go after a high-priced veteran.

“I like the idea of making the draft picks because I think it’s how we want to build this the right way,” Adams said. “If an opportunity comes that we think is the right thing for us in the short- and long-term, then that’s something we’d be open to doing. But what we don’t do is move a pick for a really short-term solution. I just don’t believe that’s the way we’re going to build this franchise out for the long-term.”

So what kind of talent is available in the first round? Jerry Forton, the Sabres’ director of amateur scouting, expects “a really good player” will be available if they keep the ninth pick.

“There’s a chance you’re getting just as good a player at nine as you’re getting at four or five,” Forton said last Thursday in Buffalo. “So we’re really excited about a group of players in that range. If you even get higher in the draft, that’s a great thing to do from my perspective. It takes some of the risk out of it, I guess.

Dan Marr, the director of NHL Central Scouting, said the Sabres “could get a guy they had in their top 10” with the 16th pick.

“And they’re going to be elated about that,” Marr said. “So then when they get that second pick, they’re going to look at the other names there, but they may skip over a name to take someone that they kind of slotted on their list that they have a really good feeling about. And they don’t know if another team is going to step up for them or not. And so they may step up and take a little bit what you might call a little more risk here or chance, riskier chance on a pick. But they’re going to leave the draft happy, saying they got two players that they think will play for them.

“It’s a deep draft. There’s not going to be like player of the decades come out of this draft class. But there’s going to be a lot of players who will be (NHL) All-Stars down the road that are going to play in the National Hockey League for a long time.”