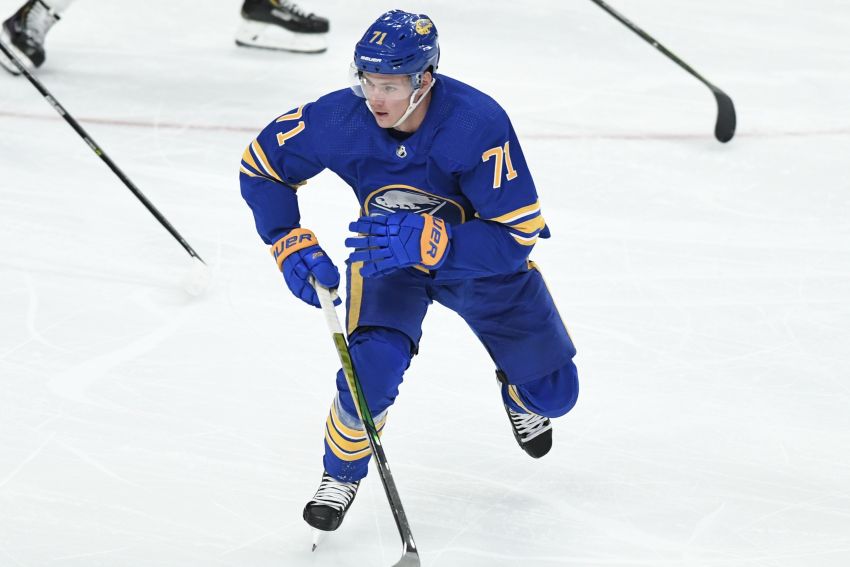 Olofsson, 26, has already amassed two 20-goal seasons and has shown he possesses the talent to crack the 30-goal mark. Contracts like the one he’s expected to sign are complicated.

The Swede, who’s set to become an RFA again, expects it could take months to reach a new deal.

“I know it’s going to take some time here,” Olofsson said Sunday as the Sabres held end-of-season meetings inside KeyBank Center. “I’m not worried about signing a deal here quick. I know it’s going to probably go the whole summer maybe even before we figure something out. But I’m all good with that. I know what it’s like now. There’s nothing that needs to be rushed.”

His new contract might be the biggest item on Sabres general manager Kevyn Adams’ plate during what could be a quiet offseason.

Oloffson, who’s eligible to file for salary arbitration, signed a two-year, $6.1 million deal in October 2020. That contract was a reward for a stellar rookie season in which he scored 20 goals and 42 points in 54 games.

Olofsson just ended a campaign in which he endured a stunning 30-game goal drought but still recorded 20 goals and 49 points in 72 games.

He finished on a tear, compiling 15 goals and 28 points over his final 34 outings. He also roared out of the gate, scoring five goals and nine points in the first seven games.

If Olofsson hadn’t suffered a wrist injury in early November, he might’ve joined center Tage Thompson and winger Jeff Skinner, his linemates late in the season, in the Sabres’ 30-goal club.

While Olofsson missed just eight games, he wasn’t the same player when he returned. The injury hampered his shooting, his greatest asset, and after scoring Oct. 31, he did not register another goal until Feb. 15.

Still, Olofsson thinks battling through the injury made him a better, more complete player.

Olofsson said he won’t be representing Team Sweden at the upcoming World Championship because of his wrist and contract status.

“I just want to heal up, be 100 percent for next year,” Olofsson said.

Sabres defenseman Rasmus Dahlin and winger Rasmus Asplund will be playing for Sweden, according to Hockeysverige.se. Dahlin said on Saturday he hadn’t made a decision yet.

Meanwhile, Sabres defenseman Henri Jokiharju said on Sunday he will be playing for Team Finland in the tournament, which starts May 13 in Finland. One of the host cities is Tampere, his hometown.

“I hope it’s just a one-in-a-lifetime opportunity for me,” Jokiharju said.

Has the rivalry with Dahlin, his defense partner much of the season, started?

At least one more Sabre could participate in the tournament. Thompson said he hasn’t decided if he will play for Team USA. Sabres coach Don Granato will be an assistant for the Americans.

“Having Donny there would help, and it would be a deciding factor,” Thompson said. “It was great for me last year (to play in the tournament) and a confidence boost coming into this season going there and getting opportunities there.”

Sabres rookie defenseman Owen Power said he and Team Canada made a “mutual” decision he wouldn’t play in the tournament this year.

The Sabres, by virtue of finishing 24th overall this season, have 5 percent odds for the first overall pick in the NHL Draft Lottery on May 12, the NHL announced Sunday.

The Vegas Golden Knights have 0.5 percent odds to move up as many as 10 spots in the lottery. Vegas, of course, traded that selection to the Sabres in the Jack Eichel deal.

If the Golden Knights move into the top 10 of the draft, they will keep the pick and transfer their 2023 first-rounder to the Sabres.