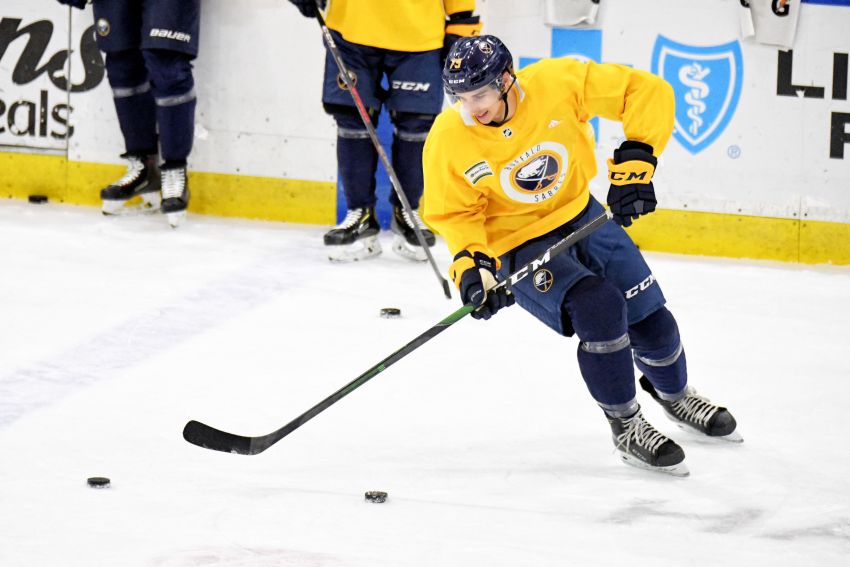 “It’s a great start for him in the World Juniors, and I love the fact that’s he’s a go-to guy there,” Sabres general manager Kevyn Adams said on a Zoom call Tuesday to discuss training camp, which opens Thursday.

But a night later, the Canadians faced Slovakia, a tougher opponent, and coach André Tourigny utilized Cozens, 19, in the waning minutes to close out a tight 3-1 win in Edmonton.

Cozens’ rapid development could earn him a spot in the NHL next month. If Canada plays for a medal, the Yukon native, the seventh overall pick on 2019, will remain at the tournament until at least Jan. 5. So he will likely miss at least the first week of camp.

But the COVID-19 protocols the NHL and NHL Players’ Association agreed to stipulate players must quarantine for seven days and undergo four COVID-19 tests when they arrive in their home city.

Allain Roy, Cozens’ agent, wondered if the NHL would institute a special rule for players returning from the tournament, which is being held in a bubble.

Coach Ralph Krueger believes the Sabres will have time to evaluate Cozens, a center, and winger Jack Quinn, his Canadian teammate. The Sabres drafted Quinn, 19, eighth overall in October.

In the pandemic shortened 56-game season, the Sabres can play Cozens and Quinn seven games each before their entry-level contracts kick in.

“We’re in no rush,” Krueger said. “Let’s let it happen organically. What we’d like to do is to bring … Dylan and Jack to camp and see where everybody else is at that time.”

Krueger is hopeful Cozens and Quinn can play in the Sabres’ second intrasquad scrimmage Jan. 9. There are no preseason games this year.

The Sabres can also put the prospects on the four- to-six man taxi squad the NHL has implemented because of the COVID-19 pandemic.

Adams believes allowing the 6-foot-3, 198-pound Cozens to compete against the world’s best teenagers – “Not just in the games but the practices,” he said – will buoy his short- and long-term development.

“For me to support (Cozens) and the chance to be on Team Canada, be in a leadership role, feel that little bit of pressure, what it feels like on that stage again with everybody watching, I thought was just a great growth opportunity,” said Adams, who played for Team USA in the 1994 World Juniors. “So I don’t see in any way it impacting in a negative (way) coming to Buffalo and his chances, because to be honest with you, he’s now had a long runway to be in game shape and playing and competing.”

Adams said he hopes the Sabres can let fans into KeyBank Center at some point this season.

“It would be great for our fans, for our players,” he said. “I think if anyone on this call knows what the world looks like in a day or a month from now, I’d be impressed. It’s impossible to really answer. I’ll say this: I think we all certainly love the idea of having fans in our building as soon as possible. I do know our organization, on the business side, there’s regular communication with the state to understand where this could eventually lead and what our options could be.”

Update: The Sabres have sent Dea to the Amerks.