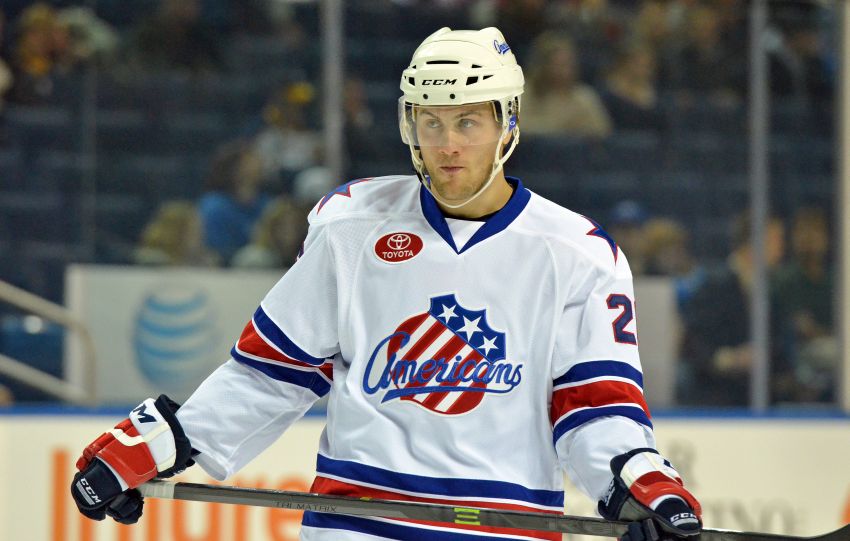 BUFFALO – As expected, the reeling Sabres, losers of three straight games, will change their lineup for this afternoon’s tilt against the Detroit Red Wings.

Slick winger Johan Larsson has been summoned from Rochester to replace Marcus Foligno, who got “banged up” in Saturday’s 5-0 loss in Pittsburgh, Sabres coach Ted Nolan said.

In addition, 19-year-old rookie Nikita Zadorov, a healthy scratch 11 times this season, and Andrej Meszaros, a scratch the last two games, will play defense. Andre Benoit and Mike Weber, who spoke passionately about the Sabres’ sorry state Saturday night, will be scratched.

Michal Neuvirth will start in goal.

“He’s been working his behind off in practice and working on his game,” he said. “He’s getting better.”

Larsson has three goals and eight points with the Americans. A preseason concussion ended his chances of making the Sabres out of training camp.

Larsson will skate on the left wing with center Cody Hodgson and Chris Stewart.

The 2-9-1 Sabres need any spark they can find. They’ve been blanked two of the last three times and five of the last eight.

“It’s very frustrating,” Nolan said. “It’s a simple fact, we have to work. If we don’t work, we’re in trouble. You can just keep repeating, keep repeating and going to the drawing board. Hopefully, one day it will click in.”

How is the message getting lost?

“That’s where there’s some sleepless night,” Nolan said. “I don’t know if you shoot the messenger. Is the message not getting through? Are we saying it the wrong way? Are they hearing but not really listening to words. You have to go right back to basics and make sure they know what we expect, and it’s not too hard.

“I think the one thing we’ve asked from Day One is as long as we work and give an effort, usually good things will happen of we compete and battle.”