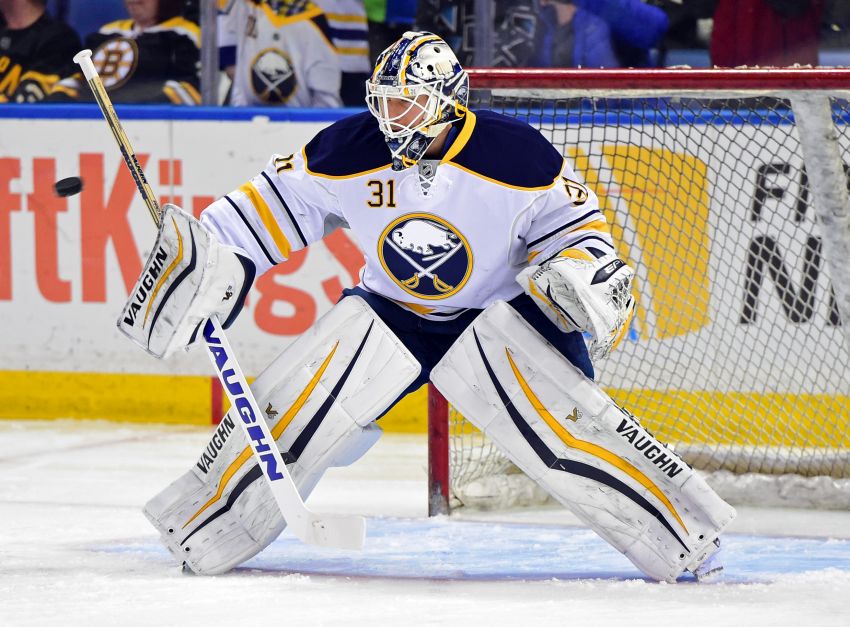 PITTSBURGH – What was shaping up to be the Buffalo Sabres’ most impressive and unlikely win this season quickly turned into a nightmare Tuesday and ended with another loss to the Penguins.

After going up 3-0 before the first period ended inside a stunned Consol Energy Center, the Sabres completely imploded during a disastrous second, allowing four goals, including two late short-handed scores during the same power play.

“I thought we were feeling good, then we took our foot off the pedal,” defenseman Zach Bogosian said following the Sabres’ 5-4 shootout loss.

With Eric Fehr off for tripping, Tom Kuhnhackl tied it at 18:47 before Nick Bonino put the Penguins up 24 seconds later, capitalizing after Carl Hagelin forced Sabres goalie Chad Johnson to cough up the puck behind the net.

The Penguins then left the ice with the 18,513 fans roaring.

“You have to bring that consistency all night long,” Sabres winger Ryan O’Reilly said.

Still, the Sabres settled down later, and Bogosian’s power-play goal tied it 2:13 into the third period.

“We got the opportunity in the third,” Sabres coach Dan Bylsma said. “We needed to come up big with a goal, and I liked the response from our guys stepping over the boards and getting a goal.”

The Penguins used shootout scores from Kris Letang and Phil Kessel to secure their ninth win in 10 games.

Incredibly, the Penguins, the NHL’s hottest club, are 35-0 this season when they have a lead after two periods. They’ve beaten the Sabres nine straight meetings and five straight games here.

Sabres rookie Jack Eichel nearly ended those streaks, but his overtime breakaway was stymied by Penguins goalie Matt Murray. The speedy center later missed the net on a shootout attempt.

Eichel, whose turnover led to one of the Penguins’ short-handed goals, looked dejected following the game as he sat at his locker.

“I know he was pressing to get a goal for us, to get that back,” Bylsma said.

Bylsma added: “I know he feels like those are ones he should have.”

Some unlikely contributions buoyed the Sabres early. Struggling winger Matt Moulson – remember him? – scored on the power play at 9:26, his sixth goal this season but just his second in 64 games since Nov. 1.

O’Reilly, who moved from center to the left side Tuesday, scored short-handed at 14:05, his first since Jan. 8, a 25-game stretch.

When defenseman Jake McCabe scored four-on-four at 18:58, his first goal since Dec. 15, the Sabres seemed on their way to an upset.

“I just don’t think we kept our foot on the gas,” said Sabres rookie defenseman Casey Nelson, who had two assists and has four in his three-game career.

Goals from Ben Lovejoy and Conor Sheary got the Penguins back in it before the second period was six minutes old.

“You can’t get off kilter,” McCabe said. “You need to stay even keeled. That’s one of those things where you had a good first period, but we kind of got away (from) what we were doing in the second. They made us pay.”

The Sabres gave up two short-handed goals on the same power play for the first time since Feb. 25, 2001 against Tampa Bay, according to hockey researcher Mike Haim.

“You score two power-play goals, you’re going to be pretty happy with your special teams,” Bylsma said. “But we end up even on the night.”

The game ended a streak of 22 straight regulation contests between the clubs. Their last overtime game was a 2-1 Penguins win Dec. 19, 2009 in Buffalo.

Johnson, who has started six straight games and seven of the last eight, made 42 saves. Bylsma wouldn’t say if he will finally rest him Thursday when the Sabres host Toronto.