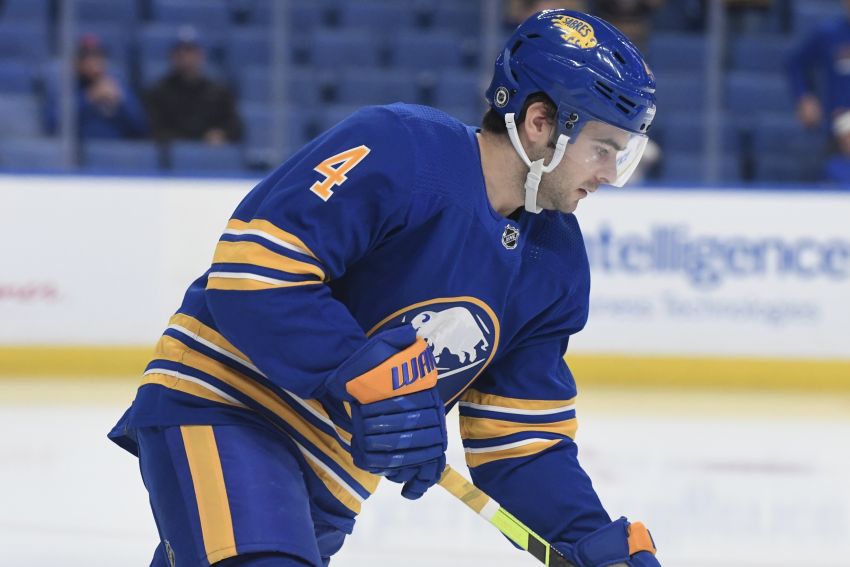 Will Butcher is one of two Buffalo players sidelined with a non-COVID illness. ©2021, Micheline Veluvolu

PITTSBURGH – The concern over the growing number of positive COVID-19 cases forced the NHL on Friday to postpone games involving the Colorado Avalanche and Florida Panthers through Dec. 26.

So Wednesday’s Buffalo Sabres home game against the Avalanche has been shelved. No makeup date has been announced for the Sabres’ first COVID-related postponement this season.

The NHL on Friday also extended the Calgary Flames’ postponements through Thursday.

COVID is tearing through the NHL. The Flames have 19 players in protocol, the Panthers have seven and the Avalanche have five. The Nashville Predators’ entire coaching staff and eight players are in protocol.

So far this season, only one Sabres player, goalie Dustin Tokarski, has been placed in protocol.

Right now, however, they have two players – winger Anders Bjork and defenseman Will Butcher – out with non-COVID illness, coach Don Granato said.

The Sabres, of course, closely monitor any player who’s ill.

“We’ve been very proactive with both of these guys limiting them around the rest of the group, first sign of symptom, obviously getting them tested right away,” Granato said prior to Friday’s 3-2 overtime loss to the Penguins inside PPG Paints Arena. “Rochester’s had their challenges as well as other teams in our league. … (It’s) a very, very elusive thing we’re dealing with culturally. The only thing you can do is work hard to minimize it. That’s our focus.”

Granato believes the NHL has handled the COVID situation well. He said his players have “comfort.”

“You talk to (winger) Kyle Okposo, the guys that talk with the union, and they feel very comfortable that their voices are heard,” Granato said. “So it actually is a really good environment in that way, when they do go on the ice and play, they can play with clarity, which from the coaching side is the biggest concern.

“You want the players to feel safe especially when they go into that competition, and I feel that’s been the case with our guys all the way along, because on the other side they’re being respected, their concerns are being respected. That’s all we can do.

“It’s working from that extent, when the guy does go on the ice and we prepare for a game, we feel comfortable going into to. So the decisions that they make, as the league makes to (postpone) games is OK with us. What we’ve seen is fine.”

Jankowski, 27, created defenseman Mark Pysyk’s game-tying goal in Thursday’s 3-2 shootout win over the Minnesota Wild by grabbing the puck down low and carrying it along the boards. The assist was his first point with the Sabres.

“His confidence is growing and the practices have helped where he’s been able to identify with our expectations as a team, as linemates, obviously coaches,” Granato said of Jankowski. “He’s an intuitive guy and he’s figured those things out to the point where he is playing with a lot more calm and freedom in his game. His read and react is better. …

“There were two or three big plays that he made even before the goal to keep the puck alive, allow us to get a line change, and maintain offensive zone pressure the shift before that.”

“His teeth and face and everything (are) banged up in that area but he’s a hockey player, he’s ready to go,” Granato said. “He got some teasing today as a result.”

Jokiharju played with a jaw protector.