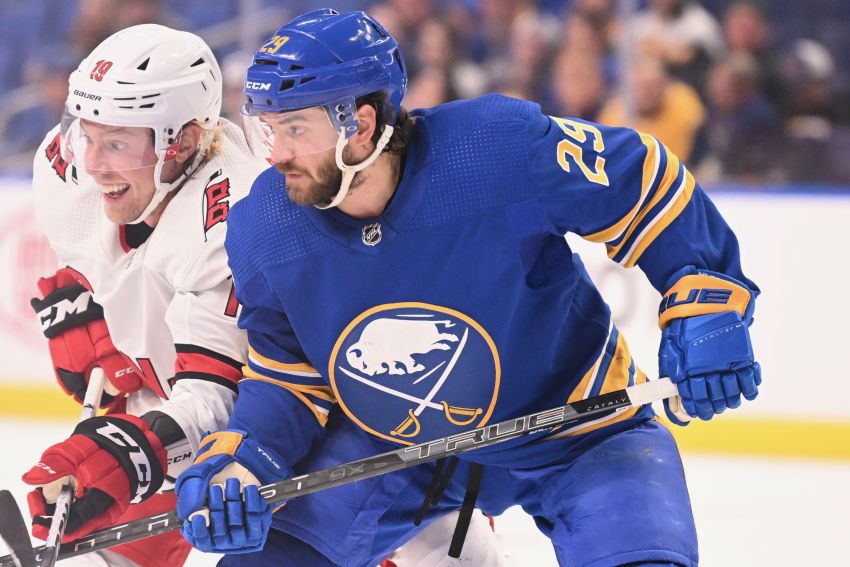 Vinnie Hinostroza lost his spot in the lineup this season. ©2023, Micheline Veluvolu

BUFFALO – As the Sabres mature and their roster evolves, they’re going to lose some popular players. It’s a reality in the modern NHL, and they must get used to it.

Winger Vinnie Hinostroza, who on Thursday cleared waivers and was assigned to the Rochester Americans, won’t be the last friend they see leave.

Over his season and a half in the organization, Hinostroza, 28, has grown close to his Sabres teammates.

“And it’s not an easy thing, because … there’s humans underneath all the equipment, and it is difficult when you see somebody that you care about get waived or get traded. But we got to come in and do our jobs.”

Hinostroza had played just four of the last 20 games before the Sabres placed him on waivers Wednesday. The Sabres, who beat the New York Islanders 3-2 in overtime Thursday, can use Hinostroza’s spot to carry three goalies on the 23-man roster.

In a paper transaction Thursday morning, the Sabres recalled rookie goalie Ukko-Pekka Luukkonen from Rochester and loaned rookie winger JJ Peterka to the Amerks. They summoned Peterka when they assigned Hinostroza to the AHL.

“He has a love for his team and teammates and being here, and that’s a tough, tough day,” he said. “And it is an unfortunate part of this case, the 23-man roster, the business side of that, and it’s something that is going to affect everybody differently in that locker room. It just can’t interfere with what you have to do next. It’s going to pause you for a bit or stunt you for a bit in various ways, but I think our guys understand that the task beyond that, they know how to devote enough attention to that to be prepared.”

The Sabres recently scratched Hinostroza, who signed one-year, $1.7 million contract in the offseason, for eight straight games. He played three contests last week before sitting out the last three.

He has compiled zero goals and eight assists in 19 games this season.

Last season, his first with the Sabres, Hinostroza scored 13 goals and 25 points in 62 outings. But the emergence of Peterka and rookie winger Jack Quinn and a healthy forward corps has pushed Hinostroza out of the lineup.

Hinostroza has compiled 51 goals and 145 points in 353 career NHL games. He played for the Chicago Blackhawks, Arizona Coyotes and Florida Panthers before joining the Sabres.