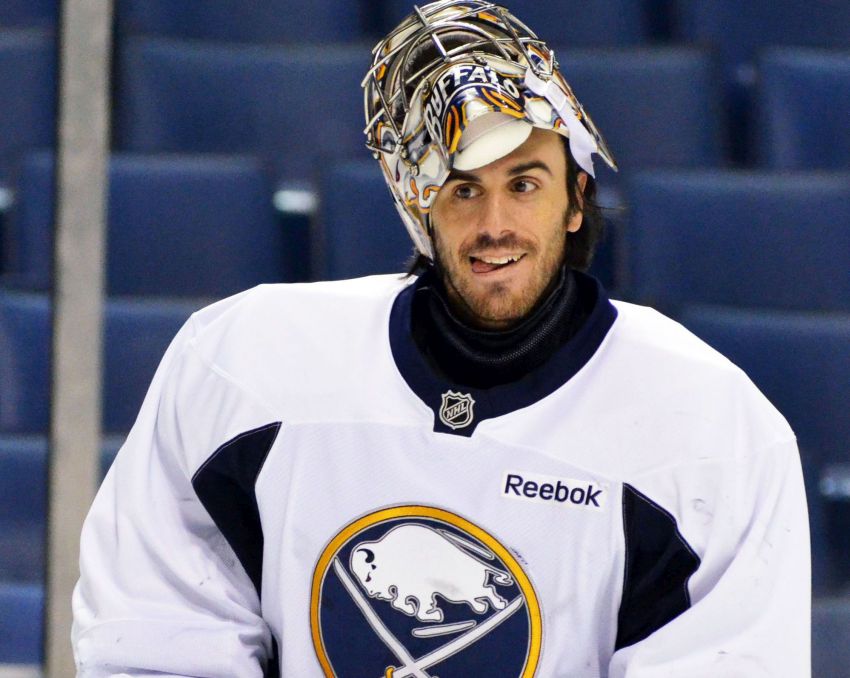 Ryan Miller had to learn how to limit his workload in practice. ©2023, Dan Hickling

BUFFALO – Having played with Dominik Hasek in Detroit, Matt Ellis learned firsthand how his legendary work ethic helped make him perhaps the greatest goalie in history.

When Ellis arrived here in 2008, he quickly noticed that goalie Ryan Miller, whose No. 30 was retired by the Sabres prior to Thursday’s 3-2 overtime win against the New York Islanders at KeyBank Center, possessed a similar drive to be the best.

“The thing that jumped out at me right away is, one, was Ryan’s relentless work ethic to be great – his details, his preparation, the way he practiced, the way he competed, the way he just always wanted more,” Ellis told the Times Herald. “It was apparent to me, and, again, you start seeing traits of elite players elsewhere, and now, all of a sudden, you’re in the midst of this.”

Former Sabres defenseman Nathan Paetsch said he has never seen a player work as diligently as Miller, who will also be inducted into the team’s Hall of Fame.

“His daily practice habits, his competitiveness in practice, his willingness to always trying to get better,” he said. “I think he was constantly trying to get better. And he had some big workloads in his years, and on his days off or when he was a backup, he was still just a machine in practice. Like, it was incredible. He just always wanted to be better.”

He added: “That’s what a lot of people don’t know about him maybe. (They know) how great he was in games, but if you would’ve been able to see him in practice, that’s why he was great in games. He was just on every day.”

Miller, of course, had to learn how to limit his workload.

“(We told him), ‘Millsie you got to get off, you’ve seen 300 shots this practice. You got to leave a little for tonight,” former Sabres goalie coach Jim Corsi said.

If you scored on Miller in practice – a big if – you might draw his ire.

“He got rattled when you scored on him, let’s put it that way,” former Sabres winger Drew Stafford said. “And when you did score on him, it wasn’t that often that you did. And that’s for me as forward, when I was trying to find ways to get better or work on my shot or trying to find ways, he helped me as well, because here I am every single day I can shoot on the best in the world.”

Ellis, now an assistant coach with the Sabres, said Miller “had sense of calm to what he did.”

“But there was also a competitive fire that offset that sense of calmness,” he said. “By calmness, I mean kind of the sense that he gave everybody in front of him to be able to get to your game and allow the team to build into that. Obviously, he was a foundational piece for us that was fantastic.”

Speaking to reporters prior to Thursday’s game, NHL commissioner Gary Bettman said he could see the Sabres hosting another outdoor game in the future. The team, of course, hosted the first Winter Classic in 2008 at snowy Highmark Stadium.

“You have to promise me another snow-globe day, but that was a spectacular day that is emblazoned in my memory and I’m sure all of yours,” Bettman joked. “It was incredible. … Yes, when there’s a new stadium, we’ll be more than happy to bring back an outdoor game.”