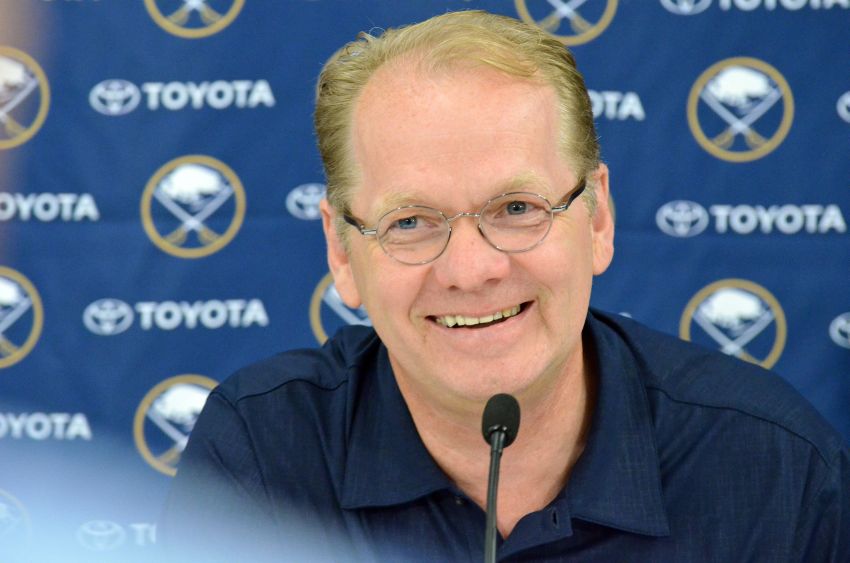 “I don’t want anyone to think we didn’t vote in favor of it,” Sabres president Ted Black said Tuesday during a 30-minute news conference inside the First Niagara Center to talk about the upcoming season.

But how does the new collective bargaining agreement benefit the Sabres? Terry Pegula, their billionaire owner, spends freely on the team. Money isn’t an issue. The Sabres operate like a big-market club.

Black said the team supported the work stoppage for what the entire league will receive in the new CBA. In turn, the stability the agreement can create will benefit fans.

The deal could stretch as long as a decade, so “fans don’t have to go through this crap for the next 10 years,” he said.

Still, Black wants the Sabres’ rabid fan base to know the team is sorry for the lockout.

“Certainly, the fans are entitled to an apology from everybody involved in this,” he said. “On behalf of the Pegulas and the Sabres, we do apologize that fans have to go through this.”

Black also said: “We really appreciate the patience of our fans. Sometimes, in many ways, fans’ patience can be tested to the limit and sometimes broken, and we hope that hasn’t happened here in Buffalo. The relationship we have with our fans is the most important thing in our business.”

The stoppage is essentially over now, however. The CBA tentatively agreed to early Sunday morning should be ratified within days. Abbreviated training camps could open Sunday, the Canadian Press reported.

Black wasn’t sure when the regular season would begin. The Sabres originally had a home game scheduled for Jan. 19, the day the league wants to start. But he said Jan. 20 is the likelier date for the home opener.

Expect a full house whenever the season starts. Black said the Sabres only lost about 30 season ticket holders during the lockout. Their waiting list has 3,000 names.

“In our market, we’re blessed to have a very strong relationship with our fans,” Black said.

But what about the relationship with the players, some of whom have been criticizing NHL commissioner Gary Bettman and others for months? Black said the Sabres had “unwavering” support for Bettman.

“At the end of the day, the players love the game, and you hope there’s enough owners that love it, too,” Sabres winger Thomas Vanek said. “I’m sure they do. And you have eight to 10 years to work on it. You start with small steps. It’s an industry. They need us. We need them. We got to find a common ground.”

“I hope some of that (lockout animosity) doesn’t spill over onto what Terry and (wife) Kim Pegula do,” Black said. “It’s funny, because sometimes you hear people say, ‘I’m really angry at the owners, but I love that Terry Pegula.’ … I don’t know that anyone has that personal animosity at our owners.”

Meanwhile, Regier expects camp will be small. The Sabres could integrate practices with their AHL affiliate, the Rochester Americans, although Regier doesn’t know how that might work.

The Sabres have pulled winger Marcus Foligno and center Cody Hodgson, two youngsters kicked back to the minors by the lockout, from the Amerks’ lineup.

Defenseman T.J. Brennan, who has 12 goals and 31 points, will keep playing until camp starts. The Sabres already have eight NHL defensemen, so Brennan’s presence certainly creates a predicament. The 23-year-old must clear waivers.

“We have a decision to make because of the way he’s played, the numbers he’s put up,” Regier said. “He’ll either have to stay here or we’ll have to make a decision about whether or not to waive him, and if we do, we’re at risk of losing him.”

Either way, it’s very possible the Sabres will shed a defenseman before the shortened season starts. In fact, prior to chatting with the media, Regier took a call from a team inquiring about some of the team’s defenders.

Imagine that, some actual hockey talk.

“It’s exciting to be back,” Regier said.

Related: Sabres happy to be prepping for new season

Sabres’ Ott: ‘Time to celebrate that hockey’s back’