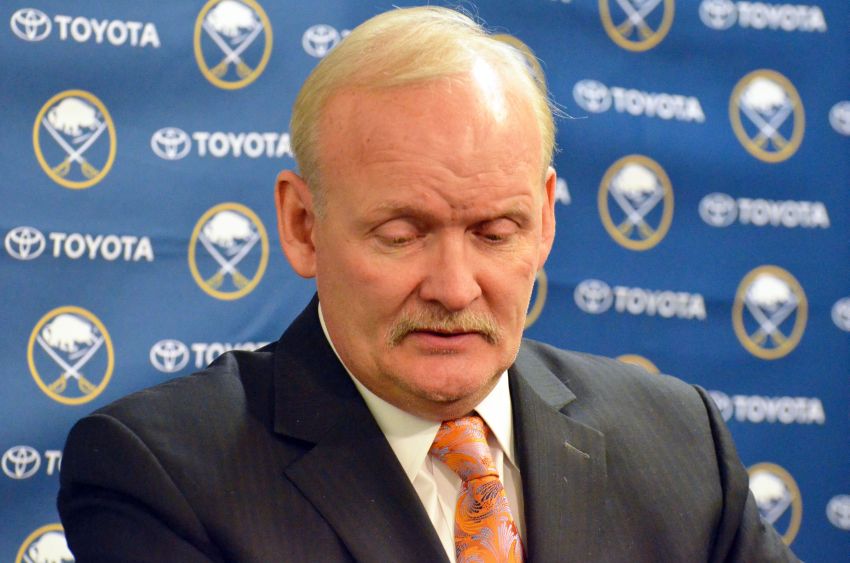 BUFFALO – Lindy Ruff’s mood belied his team’s plight. The Sabres coach was smiling and brimming with energy during a frank nine-minute chat with the media Thursday following a 70-minute practice inside the First Niagara Center.

“It is on me,” Ruff said about the challenge of fixing the Sabres’ poor 5-8-1 record, which has them mired in 15th place in the Eastern Conference. “I understand that. I understand this is on me to clean it up, and how I deal with my players, that’s my business.”

Clearly, Ruff, who’s been much more upbeat with the media this year, is trying to be the positive face of the club and deflect blame from his players, several of whom are experiencing terrible seasons.

“We’ll find it,” Ruff said confidently after the Sabres prepared for tonight’s game against the Boston Bruins, the start of a three-game homestand. “I mean, we’ve gone through it. We knew we were a little young down the middle. But it will come. I’m confident it’ll come. It’s all on me to clean this mess up. I’m not done trying. I think the attitude of the players has been awesome. The attitude today on the ice was great. The way we went into the Ottawa game (a 2-0 loss Tuesday) was great.”

“When we had a tough stretch last year, looking back on it, I think we got down on ourselves too much,” Pominville said. “There was a lot of negativity around. This time around we’re just trying to stay upbeat, more positive, sticking with it. I think it’s everyone’s job to try to push each other to be better.”

Ruff believes “the team will feed off my energy.” He spent much of Wednesday’s off day reviewing video and was loud throughout Thursday’s long session, the Sabres’ first full practice since last Friday.

“I came in here (Wednesday), we had a couple good meetings, we talked about things we got to get going a little bit better, talked about getting the team in the right mood today, and that’s up to me,” Ruff said, adding Thursday’s practice was “what we needed.”

But Ruff knows the Sabres are running out of time just 26 days into the season. Incredibly, they’ve already played 29 percent of the 48-game schedule. Nine conference opponents have played fewer times, too.

“I’m concerned after every time we lose because it’s a shortened season,” Ruff said. “At the same time, you have an opportunity every night to knock somebody off that’s right around you, which gives you a chance to catch up. But you have to win games. You focus on trying to get points.”

Sabres winger Marcus Foligno added: “You really can’t say, ‘Oh, we’ll wait for tomorrow.’ We got to take advantage of what we got now and really capitalize on certain situations.”

In an age of parity, with a slew of players underperforming, the Sabres haven’t had a strong 60-minute effort or a game in which “you kind of go, ‘Boy, that was a little on the easier side,’” Ruff said. He thinks his team nearly played a complete contest Feb. 3 at home against Florida, a game they lost 4-3 after leading 3-1.

The Sabres’ weaknesses have been discussed constantly for weeks. Most notably, their defense has performed horrendously and they rarely score if Thomas Vanek’s not on the ice.

Issues that have dogged them for years – defensive breakdowns, protecting leads and secondary scoring – keep popping up.

“I think you cycle through that every season,” he said. “It’s no different than St. Louis. (They started) 6-1, everybody thought they were the best team in the league and they lose five straight. Then you cycle through some of the issues and you’re trying to adjust. You go to those hot spots and you’re trying to adjust. It’s almost the same every year. Sometimes it’s a little bigger; sometimes it’s a little less.”

The Sabres have been receiving little from their top line recently. Vanek’s pointless in two straight games for the first time this season. Pominville’s endured four straight pointless contests while Cody Hodgson, their center, is at two.

Not coincidentally, the Sabres have scored one goal in the last two games.

Right now, all eyes are focused on winger Drew Stafford, who’s still searching for his first goal despite pumping 40 shots on net, the most of any played with zero scores. An epic miss – he whiffed on a glorious chance Tuesday facing an open net during a three-on-two break – only magnified his struggles.

“I think everyone saw the highlight of him missing, just heeling what would’ve been a wide-open one-timer you’d almost think was right in the wheelhouse,” Ruff said.

Ruff’s confident Stafford will catch fire. The 27-year-old’s a notoriously streaky scorer. He scored seven goals in 10 games in March. He scored 19 times over a 25-game stretch, including two hat tricks against Boston, during his career-best 31-goal season in 2010-11.

“I try to do my best to keep Drew in the right place so he doesn’t get too frustrated,” Ruff said. “ … We’ve seen him go from where he’s at this year, the same as last year, he gets on a run, it’s incredibly hot. …

Ruff on rookie center Mikhail Grigorenko, who skated 11:50 Tuesday after sitting Sunday: “I thought it might’ve been one of his best all-around type games. If we stayed away from penalties, it probably would’ve been a pretty big-minute game for him.”