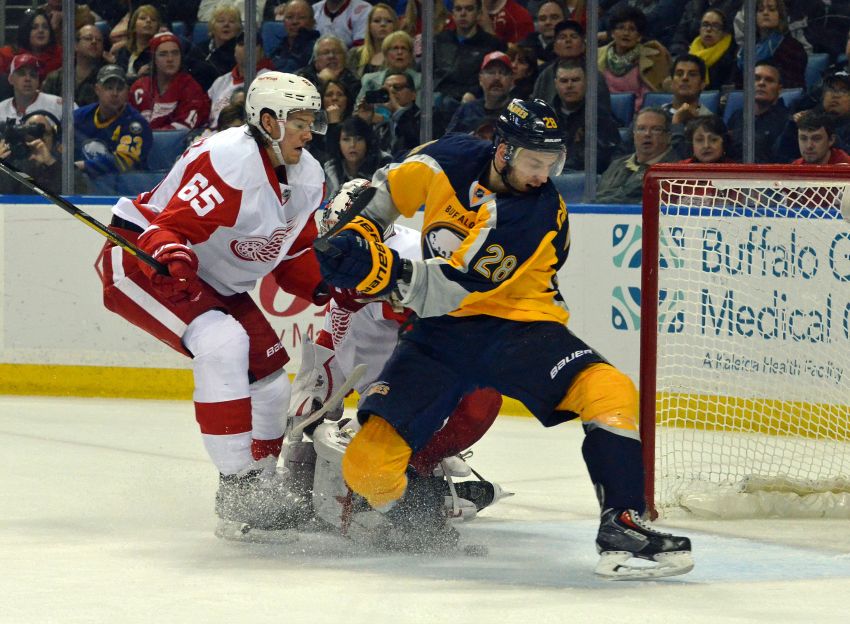 BUFFALO – Zemgus Girgensons’ development can’t be measured with statistics. The Sabres rookie only has eight scores in 67 games following his first two-goal performance in Tuesday’s 4-2 loss to the Detroit Red Wings.

But the 20-year-old center has been showcasing a growing confidence throughout the season.

Late Tuesday, with the Sabres down a goal, Girgensons found himself one-on-one with Niklas Kronwall just inside the Detroit blue line. Girgensons blew by the respected veteran defenseman in the right circle before zooming in and beating goalie Jimmy Howard.

Why doesn’t Girgensons make moves like that more often?

“I know I’m capable of doing stuff like that in juniors,” he said. “I’ve done that a couple times here. It just comes down to confidence. It’s one thing that plays a big role in this league, it’s confidence.”

Nolan met Girgensons years ago coaching the Latvian national team. He speaks about the youngster’s skill set and future passionately.

“He plays both ends of the ice. He competes. He plays with some passion and all those things that good players do. He was great tonight.”

Brendan Smith tied the game before the Sabres frittered away a long two-man advantage.

Goalie Matt Hackett kept the Sabres in the game, making 33 saves in his sixth appearance. With no healthy, established goalies left in the organization, Hackett, who struggled in Rochester all season, will likely start the final three games.

“I just want to prove myself at this level,” the 24-year-old said after his 19th NHL appearance.

Detroit moved to within one point of clinching its 23rd straight playoff appearance.