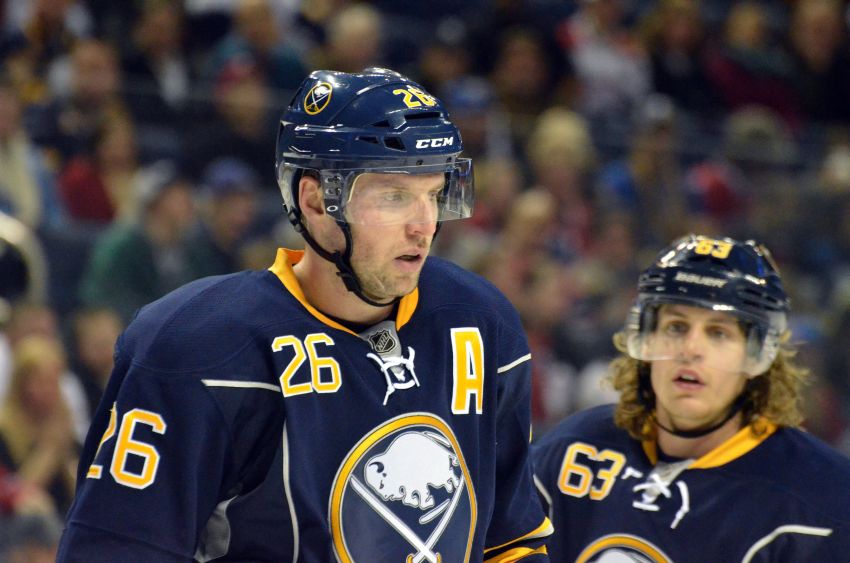 In reality, the Buffalo Sabres’ top trio – Thomas Vanek, Cody Hodgson and Jason Pominville – should’ve been broken up or tweaked weeks ago.

Since roaring out of the gate as the NHL’s best line in January, the line has cooled off considerably.

Not the kind of production you’d expect from your top wingers.

Hodgson has kept up a good pace, compiling seven goals and 12 points in the last 15 games, including two scores in Sunday’s 5-3 loss in Washington.

Tonight in Montreal against the Canadiens, agitator Steve Ott will replace Vanek, who will join Tyler Ennis and Ville Leino.

Of course, things have been so stale most of the season, Rolston, or even predecessor Lindy Ruff, couldn’t break up the top line, which has accounted for 48 percent of the Sabres’ offense (35 of 73 goals).

The coaches literally had no one else to look for offense. The team still has little secondary scoring. But at this point, 29 games into a lost season, Rolston has nothing to lose. Ott has been a supreme pest recently, and he’s skilled enough to skate on any line.

Give it a try.

“He plays hard,” Rolston said about Ott. “He certainly offers a lot to a line. He plays heavy, and he gets in there and he makes space and plays with a certain attitude.”

Meanwhile, winger Patrick Kaleta will return tonight after a six-game absence. Kaleta was seething when Rolston benched him Sunday after his five-game suspension had ended.

Kaleta said he and goalie Ryan Miller, who at first wasn’t pleased with Kaleta’s words Sunday, have talked and are fine.

“He’s like my brother,” Kaleta said. “He’s one of my best friends on the team. Some things were misunderstood there, but we’re family.”

He added: “It was blown out of proportion, I think, a little bit.”

With Kaleta back, Nathan Gerbe, who has just one assist in the last six games and just three goals and six points all season, will likely sit.